Sweden’s mortality rate among the highest in the world

Sweden's Covid-19 mortality rate is among the 10 highest in the world, at 240 per million population and steadily rising. According to US President Trump, Sweden is “paying heavily” for its decision not to enforce a lock-down.

Sweden has not imposed strict restrictions on its citizens and allowed many businesses, including restaurants and hair salons, and schools to remain open unlike many of its Nordic neighbours.

Sweden’s death rate per 1 million population is significantly higher than Finland, 37, Denmark, 76, and Norway, 38, according to Worldometers, which has been tracking the number of worldwide cases.

“Despite reports to the contrary, Sweden is paying heavily for its decision not to lockdown. As of today, 2462 people have died there, a much higher number than the neighboring countries of Norway (207), Finland (206) or Denmark (443),” the president tweeted on Thursday.

He added: “The United States made the correct decision!” It is not clear in what way, however, since in New York state 19 nursing homes have reported 20 or more deaths linked to SARS-CoV-2, raising the prospect of hundreds of unattributed deaths in a state where almost 24 000 people have died from the disease alone.

In Scandinavia, Finland declared a state of emergency on March 16 and shut down all schools, restaurants and bars on April 1, while Denmark announced the first round of closures on March 11.

When a group of 22 Swedish scientists published an open letter warning that the country needed drastic measures, the substance of their arguments was ridiculed. Instead critics argued that the data used for the Covid-19 death rate made Sweden look worse than other “cautious” estimates.

One Swedish columnist, Peter Kadhammar, even appeared to believe that information about the pandemic was simply some kind of silly cheerleading public relations exercise. “The Swedes are at least as cool as the British,” he argued. Prime Minister Boris Johnson had only “strived to be an English eccentric” with his failed policy of herd immunity.

“No country cultivates its peculiarities as much the United Kingdom. No country is so proud of its features,” Kadhammar added, suggesting that Sweden follow this ill-fated example. Britain now has Europe’s second-highest Coronavirus death toll.

The fact also remains that Sweden now has six times more deaths per capita than neighbouring Norway or Finland.

Italian newspaper La Repubblica warned too that Swedish doctors would have no choice but to deny respirators to patients over the age of 80, and even those as young as 60 with underlying health conditions. This is sadly now a fact.

Despite Sweden’s paltry record, the World Health Organization has praised Sweden as a “model” for fighting the coronavirus pandemic.

Dr. Mike Ryan, the WHO’s top emergencies expert, said there are “lessons to be learned” from the Scandinavian nation, which has largely relied on citizens to self-regulate. “I think there’s a perception out that Sweden has not put in control measures and just has allowed the disease to spread,” Ryan told reporters. “Nothing can be further from the truth.”

Former chief epidemiologist Johan Giesecke, advisor to the Swedish Government, happens to be an advisor to the director general of the WHO. He hired Anders Tegnell who is currently directing Swedish strategy and is also the first Chief Scientist of the European Centre for Disease Prevention and Control. 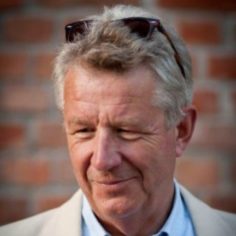 In an interview with The Post, Giesecke said the correct policy was to protect the old and the frail only. He called Covid-19 a “mild disease” and similar to the flu, and it was the novelty of the disease that scared people. It is the reality of the disease that has been scaring people however.

According to Giesecke, the British Imperial College paper arguing for lockdowns was “not very good” and he had never seen an unpublished paper with so much policy impact. The paper was very much too pessimistic, he added.

He later admitted however that the failure to protect the elderly in nursing homes was because “asylum seekers” and “refugees” on the staff were people who “may not always be understanding the information”.

This outrage has been met with silence in Sweden where the health of elderly people has been put at risk for the sake of immigrants.

Giesecke has claimed that the actual fatality rate of Covid-19 is the region of 0,1 percent. But currently the crude case fatality rates are around 6 percent globally.

Fresh serological data could certainly alter the fatality rate among people who have been infected, but as infectious disease experts point out, even a seemingly low rate can translate into a massive death toll if the virus spreads through a major portion of the population.

“I think it is the worst pandemic since 1918,” Cecile Viboud, an epidemiologist at the National Institutes of Health’s Fogarty International Center told the Washington Post. That pandemic claimed an estimated 675 000 lives in the United States.

The New York state rate is 0,5 percent — which is one death per 200 infections. It is a staggering figure, “way more than a usual flu season and I would think way more than the ’57 or 1968 [influenza] pandemic death toll, too,” Viboud said.

The United States alone could potentially count 1 million deaths at this infection rate if half the population became infected.