The Black Lives Matter movement will be funded by billions of dollars in the future, thanks to the largesse of US mega corporations. The "systemically oppressed" can now count on the most powerful support in the world, suggesting that it is not a grassroots movement.

As Black Enterprise reported, corporate America has pledged $1,678 billion “so far”. There may be more funds coming soon.

“Companies have made extraordinary pledges of support in the face of significant operational and financial challenges. Many have stepped up support for black workers and communities.” The funds will facilitate and support “action for racial justice – to empower, support, and accelerate immediate solutions, as well as work towards long-term systematic transformation”.

But the black-owned multimedia company said “the paucity of corporations and the stinginess of the donations” were surprising.

“In a sense, this shows the true regard corporate America has for black people and is, in actuality, why marches and demonstrations were required in the first place. The corporations in our BLM response database list earned over $400 billion in 2019. While we understand that the level of uncertainty in the economy warrants conservation of monetary resources, these institutions are the primary beneficiaries of the Fed’s corporate credit facility, a $6,7 trillion dollar expansion in the Federal Reserve’s balance sheet specifically designed to help these corporations.”

The Coronavirus bailout money from Washington thus went to these mega corporations while ordinary Americans are losing their jobs en masse and witnessing their small businesses being shut down and looted.

The world’s richest man, Jeff Bezos has silenced all his critics by accusing them of “racism” if they question his support for BLM.

Amazon CEO Bezos shared one email exchange with an unhappy customer who had criticized the company’s support of Black Lives Matter, to denounce all critics. “This sort of hate shouldn’t be allowed to hide in the shadows,” Bezos said in an Instagram post late Sunday. “You’re the kind of customer I’m happy to lose.”

Bezos had attacked another Amazon customer earlier who was angry over the company’s support of protesters. He said that he supported the recent protests against police brutality and that “my stance won’t change”.

“We believe Black lives matter,” the company said. “We stand in solidarity with our Black employees, customers, and partners, and are committed to helping build a country and a world where everyone can live with dignity and free from fear.”

These funds will be going to individuals like the former Obama administration intelligence official who has guaranteed bail for a human rights lawyer accused of firebombing a police vehicle in New York City.

The former official, Salmah Rizvi, told a judge the alleged firebomber was her “best friend”. Rizvi, now an attorney, helped secure the release of fellow lawyer Urooj Rahman to the tune of $250 000. 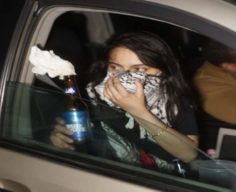 Evidence presented by prosecutors included images of Rahman holding the Molotov cocktail full of the necessary materials for making an explosive device. Despite the overwhelming evidence against Rahman, who was also accused of distributing the incendiary devices to other rioters, the judge agreed to grant her bail due to the “willingness of family and friends to sign on as suretors”.

A new Rasmussen survey has meanwhile found that 62 percent of likely US Voters now have a “favorable” opinion of Black Lives Matter, with 32 percent who share a “very favorable” one. This compares to 37 percent and 13 percent respectively when this question was asked four years ago.

Forty-nine percent of blacks regard Black Lives Matter “very favorably”, compared to 28 percent of whites and 36 percent of other minority voters.

Democrats (49 percent) are far more likely to have a very favorable opinion of Black Lives Matter than Republicans (17 percent) and voters not affiliated with either major party (28 percent).

“Instead of liberal but non-rioting Scandinavians and Germans, the new immigrants are overwhelmingly African, Asian and Hispanic. In fact, Minnesota now has a much larger proportion of Asian and African immigrants than the nation as a whole,” Ann Coulter noted.

And while BLM is being propped up, a proposal was introduced by New York City Council to shave off $1 billion from the NYPD’s $6 billion budget.

“We believe that we can and should work to get to $1 billion in cuts to New York City’s police spending in the Fiscal 2021 budget, an unprecedented reduction that would not only limit the scope of the NYPD, but also show our commitment towards moving away from the failed policing policies of the past,” said a council member, according to the New York daily, the Daily News.