Following weeks of violence and anarchy, CHOP (formerly CHAZ) was finally dismantled by Seattle police, but only after BLM activists threatened to occupy Mayor Durkan's luxury home. The CHOP area of downtown Seattle registered a 525 percent spike in crime before the barricades came down.

A six-block area of ​​downtown Seattle was declared an “autonomous zone” by local Black Lives Matter and other leftist activists. Two weeks later, three shootings with one death, several cases of abuse and at least one rape have been reported from the area, with police absent.

The Marxist utopia was instead run by armed mobs who, among other things, assaulted a suspected thief and punished a dissent with homosexual abuse. The leftwing media lauded the project while the mayor initially prevented the police from restoring order in the area. 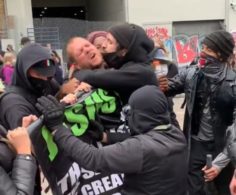 A gay Antifa activist sexually assaults a Christian man while half a dozen other activists hold him and laugh mockingly. Photo: Public Domain

Compared to the same period last year, from June 2 to June 30 there was a 525 percent spike in crime, much higher than the 300 percent repeatedly cited by Seattle black Police Chief Carmen Best.

The adherents of the “summer of love” had assured President Trump that “Seattle is fine, don’t be so afraid of democracy”. But in just two weeks, there were “22 additional incidents, in person-related crime in the area, to include two additional homicides, 6 additional robberies, and 16 additional aggravated assaults (to include 2 additional non-fatal shootings)” city officials acknowledged in an emergency order.

In Capitol Hill, a residential area known as a hangout for leftists and the LGBTQ movement, police surrounded by a mob at the Eastern District’s police station, had defended themselves legally with shock grenades, pepper spray and batons. But Mayor Jenny Durkan and Police Chief Carmen Best banned the use of tear gas on June 5.

Lies and the teargas ban eventually ignited the unrest that helped to establish CHOP. On June 7, 31-year-old Nikolas Fernández drove into a demonstration. He was attacked by the BLM mob for no reason, shot one of them in the shoulder, and then ran from there to report the incident to the police.

A completely false narrative of the incident emerged and quickly spread online. Fernández, who is not white and had acted in self-defense, was portrayed as a “white racist” who tried to run over innocent protesters and then shot one of them. Fernández’s “racism” was “proven” by photos of mostly white friends on his Instagram page.

On June 8, pressure on the police – also from the authorities – resulted in the force abandoning the Eastern District station. The protesters called the area “liberated” from the police and named it the Capitol Hill Autonomous Zone, or CHAZ. Later it was renamed Capitol Hill Occupied Protest (CHOP).

The following day, a list of requirements was posted on the blog platform Medium. The requirements included the abolition of Seattle’s police force; canceled pension for all police officers; the abolition of prisons; immediate release of criminals convicted of drug crimes; damages to all victims of police brutality; retrials for all blacks who had committed violent crimes by a jury of blacks; free college education for blacks; hiring black doctors and nurses to care for black patients; increased focus on blacks and Indians in history education; the demolition of all monuments related to the historic Confederate States of America (CSA); et cetera. 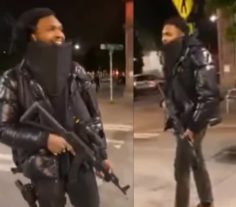 Raz Simone strolling around with an automatic weapon. Screenshot from YouTube

The mood according to consistent sources was triumphant. Masked men covered the police station with graffiti and turned the sign into obedience to the “People Department” instead of the “Police Department”. Raz Simone, a local rap musician, in true African warlord fashion, held speeches holding up an automatic rifle while shouting “This is war!” into the microphone and ordering armed protesters to guard the barricades.

Later that night, Raz Simone was filmed attacking a protester who did not obey his orders, and reportedly several others. There is also a video where his underlings tell a “citizen” that “we are the law now”. But rather than establishing law, Simone and his followers contributed to breaking it. Reports of abuse, rape, violence and murder within CHAZ leaked several times but could not be confirmed until Police Chief Carmen Best did so on June 18.

On the same day, police arrested a CHAZ citizen named Robert James for a rape attempt on a deaf woman. On Friday, 19, Isaiah Willoughby, a former city council candidate, was charged with arson for the police station.

On Saturday, June 20, a murder occurred in the autonomous zone when a brawl degenerated and a 19-year-old African American, was shot dead. His big brother George says in a video on Facebook that the CHAZ activists took the seriously wounded Lorenzo to a tent across the street where they put him on a “picnic table” and seemed more interested in filming him than saving his life.

Another African American shooter claimed to have been shot by “racists” from the “Proud Boys or Ku Klux Klan” who called him “nigger”. But no trace or information about these individuals has been provided by anyone other than Young, who himself is a convicted gang criminal.

The following day, on Sunday, June 21, the next shooting happened when a 17-year-old man was taken to hospital for gunshot wounds. He refused to talk to the police.