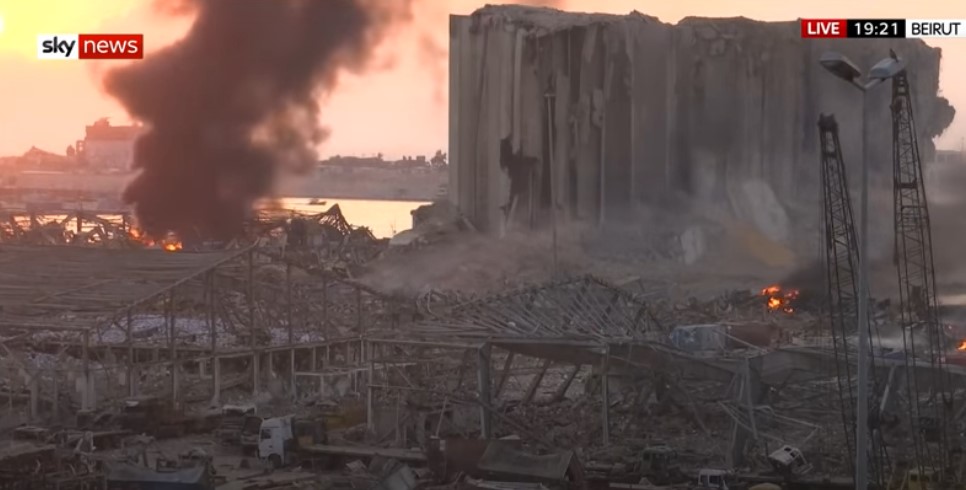 Screenshot of aftermath of the explosion in Beirut from Sky News report. YouTube

The huge white mushroom cloud stretched out low and wide over the Port of Beirut, and then the sonic blast followed, which registered as a 3,3 magnitude earthquake, felt as far away as Cyprus.

The white cloud then lifted and revealed a dark rusty orange colored plume which rose far into the sky at just after 6 pm on the hot summer evening of August 4, reported Steven Sahiounie, journalist and political commentator in Beirut.

The mammoth disaster started as a fire in the port, which began before 6 pm, and emitted a white plume of smoke. Some local residents were sharing a photo of a welder working with fire on a metal door at the warehouse in the port. The working theory is that the welder inadvertently started the fire, which then ignited various materials stored at the warehouse.

The materials described are said to be about 2 750 metric tons of ammonium nitrate, a highly explosive material, and had been stored at a port warehouse for the past six years “without preventive measures,” according to Prime Minister Hassan Diab, after it had been confiscated years earlier.

Local residents have said that there were fireworks and other combustibles all stored nearby. During the street protests which rocked Beirut from October 2019, and continued until the Covid-19 lockdown began, fireworks were used extensively as a weapon directed against the police and security forces. It was reported that the Future Party, headed by Saad Hariri, had distributed the fireworks.

Hassan Koraytem is the General Manager of the Port Authority of Beirut and a member of Hariri’s Future Party, which monitors access to the Port. The general cargo area consists of a grain silo with a capacity of 120 000 tons of grain, and 12 warehouses, which was the area of the fire and then blast, which some have been comparing to a nuclear bomb.

At least 80 people were killed in the blast and at least 4 000 wounded, Health Minister Hamad Hassan said in a phone interview on Wednesday morning, with dozens still missing.

The American and Saudi media are trying to pin blame on the Hezbollah Party. However, Lebanese security experts all agree that it would have been impossible, given the fact that the Hezbollah Party does not have any influence at the port.