Motorcyclists on their way to the protest in Pretoria. Photo: BoerMedia (with permission)

Long motorcycle processions converged on most of South Africa’s major cities, including Pretoria, Cape Town, Port Elizabeth, Bloemfontein, Kimberley, Harrismith and Welkom. Motorcyclists, often in couples with both husband and wife, carried white crosses and placards. The two issues being protested against were farm murders and antiwhite racism from the ANC regime.

At the Union Buildings in Pretoria, the motorcyclists were forbidden by police to enter the lawns below the seat of government, a highly unusual measure as protests are often held on the lawns. However, the motorcyclists fastened white crosses against the fence around the lawns and held mass prayers in both English and Afrikaans on the spot. 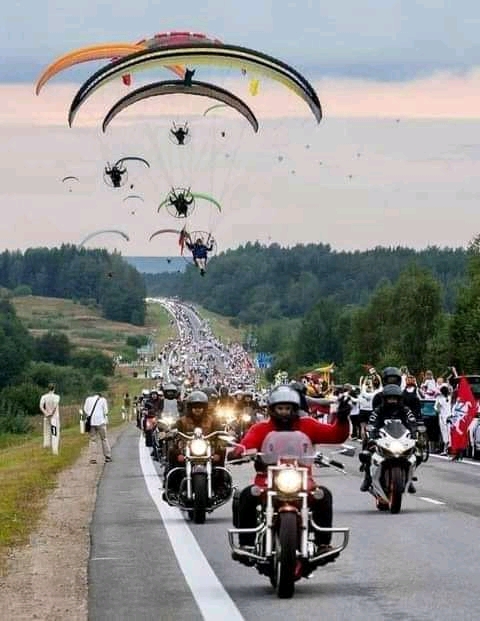 Bikers on their way to Pretoria for the protest, which inluded paragliders in the air. Photo with permission from BoerMedia.

According to statistics from toll gates on the motorways, up to 41 000 motorcycles passed the gates on their way to Pretoria.

In Cape Town, police became aggressive when motorcyclists complained about not being able to carry a petition to the parliament building in that city. Police threw a rider off his motorcycle, used their fists against him and one black police officer even drew his gun on an unarmed motorcyclists, which led the crowd to chant “f*uck off police”. (See video below for the incident.)

There was racial tension in the air as the police were mostly black, appointed by the central government, whereas almost all motorcyclists were white. Unlike in the rest of the country, blacks are a demographic minority in Cape Town and the Western Cape province. The police used tear gas and stun grenades against the motorcyclists.

Eighteen motorcyclists were arrested in the coastal city and were due to appear in court on Monday 31 August on charges of public violence, resisting arrest and defeating the ends of justice.

On Twitter and other social media the hashtag #VoetsekANC had been trending over the last few weeks and the police action in Cape Town gave further impetus to the anti-ANC sentiment, with corruption scandals around ANC leaders making daily headlines.

The smaller city of Bloemfontein in the centre of the country was overwhelmed with over 500 motorcyclists, including couples and even entire families with children.

A Free State farmer, PC Bester, said: “There have definitely never been as many motorcycles in one spot in Bloemfontein.”

Free State Agriculture, the farmers union in the province, released a statement supporting the motorcyclists and other protestors in publicising the evil of farm murders and violent crime. TAU, the Transvaal Agricultural Union, likewise welcomed the protest.