On January 28, the AfD parliamentary group delivered a speech in the Bundestag under the title “Big Tech and freedom of expression on the Internet” following Donald Trump's Twitter ban. The deputy group leader of the AfD, Beatrix von Storch, warned of the "globalist left in alliance with Big Tech".

The tech giants want to “muzzle anyone who does not believe in their truth”. Anyone who dares to have a different opinion than them is “a heretic, an enemy, a climate and Corona denier, a hate speaker, a racist, a Nazi,” von Storch pointed out.

Their declared enemies must cease to exist on social media – that is the goal of cancel culture and de-platforming. Behind it stands “the alliance of the cultural Marxists with the big tech corporations,” she said.

“They have a division of labour,” according to von Storch: “The leftist terrorist hordes of Antifa and Black Lives Matter intimidate political opponents with massive physical violence, mob wayward scientists from the university, boycott and attack companies and desecrate monuments, loud and dirty. The extinguishing armies of Big Tech’s platforms delete, block and withdraw reach, make contributions undetectable, thus destroy competitors, cut organizations off from their donors, users, consumers, quietly and dirty, without law, millions of times – pure arbitrariness.” 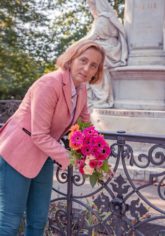 Half a dozen corporations worldwide control the network, the platforms, the payment functions, the entire technical infrastructure: Google, Apple, Facebook, Twitter, Amazon , Microsoft and PayPal. “At the push of a button by a handful of big-tech billionaires, Messrs. Bezos, Zuckerberg, Dorsey, Pichai and Nadella, anyone in the world can be blocked and digitally wiped out – and they do it, millions of times over, day after day. They are the most powerful men in the world.”

After the incumbent American President Trump was blocked on Twitter, Amazon pulled the plug on an entire alternative platform, Parler, and tens of millions of users with it. In the 21st century, however, “access to the digital public is part of basic services such as water and electricity.” Monopolists should not silence citizens because of a “wrong” opinion.

According to von Storch, the Polish government has presented a landmark law: “What Polish courts have not banned may no longer be deleted; otherwise there are high fines for the corporations. With us it is exactly the other way around: Censorship is not punished, but non-censoring is punished; that is the NetzDG of this [Merkel] government.”

We are facing a turning point, explained von Storch: “A global surveillance state and a censorship regime that is as perfect as it has never existed in human history is emerging before our eyes. This is digital totalitarianism. We have to stop it – for the freedom of expression of the citizens, for democracy, against the totalitarianism of big tech and against the rule of Silicon Valley.”

This week, Twitter has banned yet another former Trump official, just two weeks after he described big-tech suppression of free speech as “chilling”.

Former White House Director of Trade and Manufacturing Policy, Peter Navarro has had his account suspended by the tech giant. He told Fox News host Tucker Carlson that this just highlighted how the ongoing purge is part of a pre-determined agenda.

Navarro had not been active on social media recently. Despite this, the tech company invented an improbable excuse. “It was something about unusual traffic but I hadn’t tweeted since January 14,” Navarro said. “The point here is it’s because of who I am and what I might say not because of anything I did,” he explained.

“What we have here is a classic collusive oligopoly, a kind of new wine in an old bottle,” Navarro told Fox News. “What we saw with this attack on Parler was chilling to me. It’s one thing to deplatform everybody for free speech. But, this was a pincer move where Google and Apple, [the] first part of the pincer, was to not allow Parler apps to be down.” Navarro added that Amazon then came in for the “brutal kill by taking the cloud away”.

Navarro noted furthermore that America’s alleged enemies “put things up [on Twitter] all the time,” but President Trump had been removed. The Twitter censors somehow never dispute the comments of foreign governments critical of the US. “So what is going on here, I think, is a very serious threat to our democracy,” Navarro said.