As the public prosecutor of the city of Annecy announced on Tuesday, the complaint is directed against unknown persons. According to a report in the local newspaper Le Dauphiné Libéré, the man died around three weeks ago.

“Within a day and a half, problem after problem accumulated, thrombosis in vital organs, the liver, kidneys, brain,” said the deceased’s brother in a video published by the newspaper. The 63-year-old was brought to the intensive care unit. “It happened very quickly,” his brother recalled.

The family, who were “95 percent” convinced that there was a connection between the death of the man and the recent vaccination, tried to have the incident recognized as a result of the vaccination, according to the information. It also reported the case to the ANSM Medicines Agency, which requested more information to clarify the cause of death.

After weeks of uncertainty, a high-ranking representative of the EU Medicines Agency (EMA) drew a connection between the Corona vaccination with the AstraZeneca vaccine and the occurrence of blood clots (thromboses).

Soon after, the European Medicines Agency (EMA) gave the green light to the vaccine. “The benefits of the active ingredient in combating Covid-19 are significantly higher than the risks,” said EMA boss Emer Cooke on Wednesday in Amsterdam.

They found a connection between vaccine and thrombosis with a very low number of blood platelets. However, this occurs very rarely, they said. The authority thus continues to adhere to its assessment of the preparation but their analyses would continue, the EMA announced. 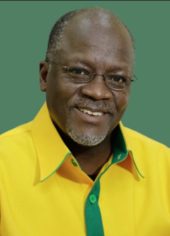 According to Wikipedia, the late Tanzanian president, John Magufuli “had increasingly autocratic tendencies seen in restrictions on freedom of speech, restrictions on LGBT rights, and a crackdown on members of the political opposition”. The same source claimed he was “known for promoting misinformation about COVID-19 during his leadership over the pandemic in Tanzania” after a lab in his country showed that a tropical fruit could test positive for Corona. He died shortly after in mysterious circumstances.

It is unclear what consequences the EMA decision will now have for the vaccinations. Several EU countries, including Germany, had previously restricted the use of the vaccine to people aged 60 and over.

In addition, new rules for the use of this vaccine were to be drawn up soon. It could be that the vaccine should not be used for certain age groups as a precaution. The number of cases of brain thrombosis among the vaccinated young people is also higher than expected. The evaluation process has not yet been completed.

In several EU countries, immunization with the AstraZeneca serum was suspended for the time being due to registered thrombosis disorders. A total of twelve cases of thrombosis have been registered since the start of the Corona vaccination campaign in France. Four of them proved to be fatal. There were 31 cases of cerebral vein thromboses also registered in Germany and eight other types of thrombosis.

The UK Vaccination Commission has since changed its recommendation for the AstraZeneca vaccine. In the future, the preparation will only be administered to adults over the age of 30 if possible, the commission announced on Wednesday. This is because of reports of blood clots associated with vaccination with the vaccine.

In Great Britain, 79 cases of rare blood clots have so far occurred after vaccination with the AstraZeneca vaccine, according to the MHRA. There were 19 deaths. Most of these cases involved young people. According to the vaccination commission, a direct connection with the vaccine has not yet been proven. But given the lower risk of dying of Covid-19 for younger people, this has been weighed up, it said.

Many countries are planning to introduce vaccination records of their populations. The German government and the media claim that this new measure is a direct result of the Corona pandemic. In Europe, however, vaccination passports were already being planned at least 20 months before the Corona outbreak.

Last year, at the start of the pandemic, Tanzanian President John Magufuli dismissed Coronavirus test kits used in his country, because the tests had returned positive results on samples taken from a goat and a pawpaw.

The SARS-Cov-2 testing kits had been imported from abroad, Magufuli pointed out in May 2020. The president said he had instructed Tanzanian security forces to check the quality of the kits. They had randomly obtained several samples, including from a pawpaw, a goat and a sheep, but had assigned them human names and ages and lab technicians were deliberately uninformed of their non-human origins. Samples from the pawpaw and the goat tested positive.

“There is something happening. I said before we should not accept that every aid is meant to be good for this nation,” Magufuli warned at the time.

Soon after this revelation, Magufuli, one of Africa’s most prominent Coronavirus sceptics, curiously died from “Coronavirus rumours” according to the BBC.