President Macron receives a slap in the face from Damien Tarel. Still from YouTube
Tain-l'Hermitage

Damien Tarel, presumed author of the aggression against the French president, and Arthur C. were arrested by the gendarmes of the Surveillance and Intervention Platoon of the Gendarmerie (PSIG) of Valence. They were presented, according to one source, as “yellow vests”, a fact which was denied by the public prosecutor.

French daily Le Figaro reported that all the people present in the perimeter of the President of the Republic at the time of the slap had been searched before having gained access to the area.  The two men arrested were unknown to the intelligence services as well as to justice, said Alex Perrin, public prosecutor in Valence. “At this stage of the custody, their motivations are not known,” Perrin told the media.

The pair are suspected of having participated in an undeclared rally that took place earlier – a demonstration of 25 people in Valence around noon which brought together farmers, yellow vests and other activists. These demonstrations were broken up and the protesters left for Tain-l’Hermitage, where the incident with the French leader took place.

The main suspect and alleged perpetrator’s Instagram account shows him as an instructor of AMHE, the French Federation of European Historical Martial Arts, amateurs who re-enact medieval battles. But the Federation condemned his gesture and affirmed that “Damien Tarel is not known nor affiliated” to it.

The men involved were interviewed by le Quotidien only hours before the infamous slap in the face. One noted that he wanted to confront Macron because the President had stated that France does not have its own particular culture. BFMTV reported that the author of the slap was 28 years old and a “rightwing royalist” who shouted “Montjoie Saint Denis!” – the battle-cry and motto of the Kingdom of France. 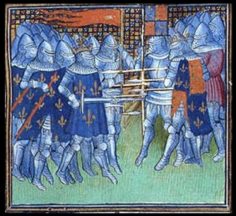 The Battle of Poitiers 1356. The Oriflamme banner can be seen on the top left. Wikipedia

It is a reference to Charlemagne’s legendary banner the Oriflamme, which was also known as the “Montjoie” kept at the Abbey of Saint Denis. The battle-cry was first used during the reign of Louis VI of France, the first royal bearer of the Oriflamme, the battle standard of the King of France in the Middle Ages in times of great danger.

Macron down-played the incident. “Everything is fine,” he said after receiving a slap in the face from Tarel standing in the middle of a small crowd that came to cheer Macron. The facts occurred on Tuesday, June 8 in Tain-l’Hermitage, in the Drôme. Emmanuel Macron had been traveling in the department to face the restaurateurs, whose indoor areas will reopen on Wednesday, June 9.

“We have to put this incident into perspective, which I think is an isolated event. This should not obscure the rest of the very important subjects which concern the lives of many,” Macron responded in an interview with Dauphiné Libéré, afterwards. The President of the Republic then warned that he would not back down in the face of what he described as “ultraviolent individuals”.

“Let us not have these isolated facts, or ultraviolent individuals – as there are always some in demonstrations too – take over the public debate: they do not deserve it,” he added. Macron also told Dauphiné Libéré that it was necessary “to respect the functions in the Republic”. Politicians from all parties agreed, including Marine Le Pen, who condemned the attack.

Prime Minister Jean Castex before the National Assembly, according to AFP, said: “Democracy […] is debate, it is dialogue, it is the confrontation of ideas, it is the expression of legitimate disagreements, of course, but it cannot in any manner include violence, verbal aggression and even less physical aggression.”

As a reminder, the two men were arrested. They were placed in police custody after the fact, for “willful violence against a person holding public authority”. The two individuals face three years’ imprisonment and a fine of 45 000 euros.