Merkel on her high horse. Screenshot from Ruptly

The Golden Rider, the equestrian statue of Carl August in Dresden, Germany is a reminder that greatness can be captured. An equestrian statue with Angela Merkel sitting on a horse without a saddle or reins has elicited a different response from viewers. The question naturally arises: How did she get up there? 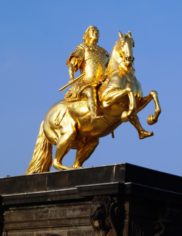 The Golden Rider is an equestrian statue of the Saxon Elector and Polish King Augustus the Strong , which stands on the Neustädter Markt in Dresden between Augustusbrücke and the main street . It is considered the most famous monument in Dresden and one of the most important sculptures of the Dresden Baroque. The statue shows August as a Roman Caesar in a north-easterly direction to the Polish kingdom on a Lipizzaner stallion. The prince is shown larger than life. Originally the rider and horse were fire-gilded. Gold leaf was used for the 1956 restoration. Wikipedia

The answer is: Presumably with a crane. The artist Wilhelm Koch called his work an “ambivalent sculpture” because it is not certain if the work conveyed “appreciation or irony”. The answer however was clear on the Internet.

The sculpture deliberately does not have a pedestal: “So grounded, as Angela Merkel has shaped politics, she is presented as a rider – on a piece of lawn with a view to the east, saddle-firmly enthroned even without saddle and bridle, and in the safe position of her mount, an American Quarter Horse.”

The artist added: “A public tribute on horseback in 2021 appears to most people as absurd as a horse-drawn carriage in Formula 1.”

The statue sparked a wide echo on social media as Twitter users made fun of it. To most it was not an ambiguous depiction but an unflattering picture of their leader.

The golden concrete sculpture was set up at the Temple Museum Etsdorf. Various cultural events such as exhibitions and concerts take place there.

A new statue, produced by a 3D printer, to Angela Merkel in Etsdorf 🇩🇪 👇🤡 pic.twitter.com/WCEB2VXyOG