A Muslim convert, Espen Andersen Bråthen, 37, is now suspected of having killed five people and injured two more with a crossbow as a weapon in Kongsberg, Norway. Questions are now being raised about the actions of the Norwegian police during the incident, the most important of them all: Could Espen, who was confronted by the police before the murders were committed, have been stopped?

Four women and a man have been murdered, and two more were injured by the armed Muslim convert in Kongsberg in Norway. The act, which despite a large number of police patrols being sent to the scene, could continue for 34 minutes. It has shaken Norway but also raised critical voices about the work of the police and the fact that Norwegian police are armed only in exceptional cases.

The suspect, Espen Andersen Bråthen, 37, has admitted the course of events but the motive has not yet been determined. The Norwegian security police believe that the act appears to be a terrorist attack motivated by the man’s radicalization as a Muslim. The mainstream media ignored his faith and instead focused on the “Danish-born citizen”.

The first alarm was received by law enforcement at 18:13 on Wednesday night about a man shooting people in Kongsberg’s center with a crossbow. The murderous attack was reportedly initiated inside Coop Extra on Myntgatan. Several people testified about frightening scenes where, among other things, a police officer who was not on duty was shot inside the store. That policeman survived with serious, but not life-threatening injuries.

Two students told Drammens Tidende how they saw a man with an arrow sticking out of his back walk out of the grocery store. “It was shocking,” one said.

The first police patrol, which was unarmed as Norwegian police usually have their pistols locked away at the police stations, arrived at the scene at 18:18 and got in touch with the suspected perpetrator and was then shot with arrows. Something that according to the police meant that they had “lost contact” with Espen who could then run from the scene and continue to attack more victims. Speculation about the police’s actions on Norwegian social media showed that the police “let” the man leave the place as they lacked weapons and simply did not have the capacity to stop the perpetrator without risking their own lives.

The police now fear that all of the murders that followed, five in number, took place after this initial contact with the police patrol. The victims were four women and a man, all aged 50-70. Two other people were injured. In addition to the crossbow, other weapons were used, police confirmed but they did not specify which ones. 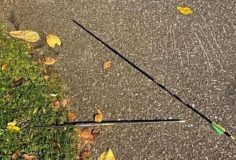 Picture of an arrow shot and broken after missing a potential victim. Photo: Twitter

According to information that appeared on social media and by witnesses who spoke to the Norwegian media, it must have been a knife since at least one of the victims, a woman, was stabbed several times after she was shot with a bow and fell on the ground.

The attack lasted for a full 34 minutes and in the end the suspected perpetrator was chased by 22 police patrols who have now armed themselves, while additional police patrols were on their way to capture the suspected terrorist. At 18:47, the police finally managed to arrest the bowman after firing one or more warning shots when they came under attack from the man who shot several arrows at them.

“The man fired several arrows at the police and he used a powerful bow, not a toy but a deadly weapon,” said police chief Øyvind Aas to DN.

The motive for the attack has not been clarified yet. The police believe that Bråthen acted alone but are still investigating the suspected terrorist connections. “We still can not establish that this is an act of terrorism. We are still investigating,” said police chief Ole Bredrup Sæverud during a press conference on Thursday afternoon.

Bråthen is a 37-year-old Danish citizen living in Kongsberg. He grew up in Norway and has a Danish mother and a Norwegian father, says his defense lawyer Fredrik Neumann to the Danish newspaper Ekstra Bladet.

According to the newspaper VG, in an incident last year, he threatened to kill two relatives. There are signs of mental illness and behaviors that may indicate autism, a common diagnosis seen in many of history’s mass murderers and serial killers, but this has not yet been clarified to be the case with Bråthen. Police, on the other hand, have on several occasions been sent to his home according to information to the Norwegian media.

On 11 June 2020, several police cars rushed to the suspect’s house. They had shields and helmets and shouted at him to come out, a neighbor told VG. The neighbor believes that the man was then arrested and taken away by the police.

Again on August 8, 2020, a police patrol visited the man and stood and talked to him for a long time, the neighbor told VG. According to the 37-year-old suspect’s neighbor, he had behaved suspiciously. “He fenced with clubs, sticks and batons in his garden. I saw him there regularly in the summer, but also all autumn if it was not too cold,” the neighbor said.

In several emails to the police, a childhood friend had expressed great concern that the suspect could do “something completely terrible” – an assessment that turned out to be correct. “He has been like a ticking bomb.”

Converted to Islam and radicalized

According to the Norwegian police, Espen converted to Islam and showed signs of radicalization and found religious support for murdering infidels. In a video on Youtube, which has been taken down, he made threats that he would do something.

“I am a messenger. I’ll give you a warning. Is this really what you want? And for anyone who wants to settle with themselves, the time has come. Testify that I am a Muslim “, says Espen Andersen Bråthen in the video. Police Chief Ole Bredrup Sæverud confirmed at a press conference on Thursday morning that the man had converted to Islam and that he had been radicalized.

“The incident in Kongsberg currently appears to be a terrorist act, but the investigation, which is led by the Southeast Police District (PST), will clarify in more detail about the motives, ” the PST press release stated on Thursday.

The most likely scenario for a terrorist attack in Norway is an attack carried out by one or more perpetrators with simple weapons, against targets with few or no security measures. Attacks on random people in public places are a recurring practice among extremist Islamists who carry out terror attacks in the West, PST added in the press release.