The 69-year-old Conservative British MP David Amess was killed by a 25-year-old Somali man during a citizens' clinic in a church in Essex. The jihadist perpetrator was immediately arrested by the police.

According to The Times the police are investigating a “possible” connection to Islamists. 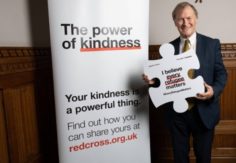 The death of David Amess was “a heavy blow to the democratic process,” tweeted former Ukip chairman Nigel Farage. He was murdered “while he was doing his job as a member of parliament”.

Keir Starmer, leader of the Labor Party rivaling the Conservatives, described the murder as “appalling and deeply shocking”.

The British public reacted in horror to the Islamist-motivated murder. Sky reporter Martin Brunt, according to a Twitter message, said that the Somali is said to have stabbed the Tory politician twelve times.

Amess had been a member of parliament since 1983. He leaves behind a wife and five children.

It was not until the early morning of October 16 that the investigators confirmed the alleged terrorist background to the crime. The police and the media had previously withheld information about the perpetrator and his Muslim religious background.

But Senior National Counterterrorism Policing Coordinator Assistant Commissioner Dean Haydon has officially declared the incident to be terrorism since the preliminary investigation revealed a motivation linked to Islamist extremism.