Bertil Malmberg was convicted of incitement against an ethnic group after pointing to scientific facts. Instead of giving him support, the Sweden Democrats have brought a case against him. Photo: Nya Tider

Sweden Democratic regional politician Bertil Malmberg was convicted on October 7 in Nyköping District Court for incitement against ethnic groups. Malmberg said at a meeting of the council that South Sudanese have a low average IQ, citing UN figures.

It was at the end of April that Bertil Malmberg at a meeting of Sörmland’s regional council pointed out the research about the average level of intelligence of South Sudanese after the Swedish Migration Agency, in its lack of wisdom, placed a number of South Sudanese quota refugees in Sörmland. This population is among the nations who have the lowest intelligence in the world, which is well documented, according to Malmberg.

Bertil Malmberg was reported to the police by the RFSU-linked Social Democrat Christine Gilljam, who had commented: “The statement expresses racial biological thinking based on the premise that humanity can be divided into different races, where some are more valuable than others.”

When Swedish weekly Nya Tider interviewed Bertil Malmberg in connection with the verdict, he said that he only tried to explain how difficult it has been for these people to integrate in Sweden, and that it would therefore be wiser to help them in their own country.

“There are lots of those who are now brought here as quota refugees, and I do not think that is good. Not only for society but also for the poor people of South Sudan. I have the greatest sympathy for them, they have for decades been employed by the northern part of Sudan which they broke away from in 2011. They have one of the world’s lowest levels of education and widespread illiteracy, the majority have worked as farmers and herders for generations. Placing them in northern Europe is not very wise as I see it,” Malmberg explained. 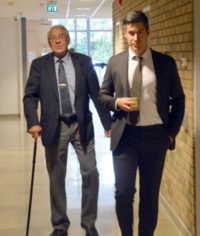 Bertil Malmberg, 81, regional politician for SD, on his way into Nyköping District Court together with his lawyer Emil Persson. Photo: Nya Tider

Malmberg was found guilty on October 7 and he was sentenced to a 40-day suspended sentence and a total fine of 24 000 kronor, for his statement. When Nya Tider interviewed Bertil Malmberg after the verdict, he said: “My lawyer and I agree that we will appeal.”

Malmberg said that he was interrupted and was not allowed to finish his testimony during the trial. “I had intended to refer to the HDI [development index] from the UN and make it clear that it was about these people becoming impossible to integrate into the labor market, but I never got that far.”

The verdict stated that Malmberg wanted  to portray the designated ethnic group to “be less valuable than other ethnic groups”. But he pointed out that he had “not spoken at all about any human value – I talked about employability”.

Studies published in peer-reviewed journals (Snyderman and Rothman, American Psychologist, 1987, 1988; Rindermann, Becker and Coyle, Frontiers in Psychology, 2016), showed that intelligence researchers consider genetic differences to be the main cause of differences between different nations’ average IQs, followed by education and health.