The South African Ministry of Health has announced that it has suspended all quarantine measures for asymptomatic Covid-19 cases with immediate effect, official broadcaster SABC News reported. This applies to both the unvaccinated and vaccinated people. 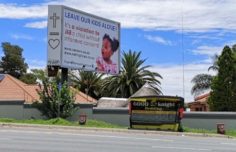 Johannesburg billboard on one of the busiest roads in the Gauteng province warning against vaccinating children. Photo: FWM

In addition, contact tracking will be discontinued – except in cases of so-called cluster outbreaks.

According to a statement by the ministry, people with a positive Corona test but without symptoms would no longer be obliged to self-isolate.

There is also no longer the obligation to submit a negative Corona test before resuming work after an isolation period of eight days. All infected people should be able to return to work after eight to ten days without presenting a test.

The majority of new cases are incidentally in the Western Cape, which is also the most vaccinated province. Overall, South Africa has a low vaccination rate of around 20 percent.

If South Africa can get through Omicron without panic why has all of Europe lost their minds? https://t.co/zIWmopwUSb

For most of the world, the pandemic seems to have run out of steam during April of 2021, with 98% of the population was unvaccinated.

Omicron has spread across the world – why isn’t it causing a wave in the unvaccinated nations? pic.twitter.com/x7wuBsEDK4

The same pattern holds for deaths, as well, with deaths per capita 6X higher in the West currently.

For 88% of the world, the pandemic appears to peaked when only 1.5% were vaccinated and Omicron is not apparently impacting these nations. pic.twitter.com/IY1HGiKW4t

The rich, vax’d & boosted, “West” currently reporting 3X the case rate as the rest of the world (22X per capita).

More importantly, infections in the relatively unvax’d nations have trended down since late April while infections spike in the West. pic.twitter.com/1GxJpmn03O

Nigerian President: More weapons for Ukraine end up in Africa

LagosSome time ago, FWM reported on arms deliveries to Ukraine, which shortly afterwards were resold on the Internet. Nigerian President Muhammadu Buhari has warned that "weapons used in the war in Ukraine are gradually leaking into the region" and called for strengthened border security.

Windhoek"The former German colony, Namibia wants to help Germany in its energy crisis". This is how an article in the online edition of a German newspaper recently began about Namibia's new "Digital Nomad" visa. The six-month visa is ideal for long-term holidaymakers. And for professionals who have their office on their laptop and can work from anywhere.