The British people have been misinformed about vaccination coverage for months. According to the government, it is 89 percent for people over 12. However, a new report showed that the actual jab rate was 62 percent, according to data analyst Daniël van der Tuin on Substack.

In the United States a similar faulty figure has been communicated. Millions of first shots were wrongly registered there, Bloomberg reported.

The British report, published by the UK Health Security Agency, revealed that there were not five million, but at least 15.3 million unvaccinated people. If children are included, this is actually 23.5 million people, said Van der Tuin. The total population of the UK is about 56 million people, of whom 47.8 million are older than 12 years.

“The new information […] explodes any conclusions about hospital admissions by vaccination status,” explained the data analyst, adding that it was likely that this also applied to other countries, including the Netherlands.

There are millions of unvaccinated people

Investigative journalist Patrick Savalle responded: “Another wappie [derogatory term in Dutch for a vaccine skeptic] conspiracy theory coming true. We have always said that the vaccination rate was at a maximum 60 percent, not 85 percent. In Britain this now appears to be true. That will be no different in the Netherlands. We are millions of unvaccinated. So persevere.”

The UK’s vaccination rate is significantly lower than previously stated. This is according to a report from the British government which put the rate at 62.2 percent and not 89 percent. The numbers are not correct in the US either. Conclusions about Covid cases and Covid deaths are therefore completely unreliable.

Bloomberg reported that the United States falsely registered millions of first injections ignoring the important role of reliable data in guiding responsible public health decisions. There have been growing signs that governments have been juggling the numbers for political ends. After the scandals about unreliable PCR tests, adjusting causes of death and the incorrect presentation of hospital figures by RIVM in the Netherlands, “blunders” have surfaced in the United Kingdom and the United States.

When a very high vaccination rate was reached in September, Patrick Vallance told the British public that there were only 5 million people left who were still unvaccinated. Patrick Vallance who is the UK government’s Chief Scientific Adviser, was previously president of the pharmaceutical company GlaxoSmithKline. 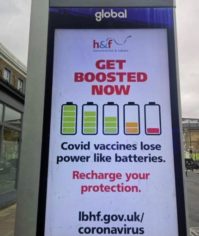 The faked high vaccination rate encouraged some British administrators and journalists to denounce the unvaccinated as a small obtrusive minority. This is remarkable, because it was already clear at the time that the effectiveness of the vaccine was declining, that British vaccinees had ended up in hospitals and that the vaccine did not prevent transmission.

US officials admitted on December 18 that authorities had been overstating the number of first injections by millions. The explanation is that millions of booster shots were registered as the first or second shot. This means that there are actually millions more unvaccinated in the United States.

The new information about inflated data from the United Kingdom, combined with the reports from the United States, implodes all conclusions about hospital admissions by vaccination status. Western governments evidently have been acting in concert under the influence of supranational organizations such as the European Union, WHO and all kinds of commercial stakeholders to present politically adjusted figures.

Injections have zero effect on on healthcare admissions

Official figures from the UK also showed that the vaccinated population was responsible for the majority of Covid admissions since at least August 16 and some 63 percent of Covid admissions were vaccinated. This percentage reflects the actual vaccination rate of 62.2 percent quite accurately. It also means that injections have had no effect whatsoever on healthcare pressure.

There are more deaths among British vaccinees

The vaccinated population thus accounted for four out of five Corona deaths in the last four weeks, although the group at risk had already received their “booster” in September and October.

This also coincided with the figures from Lower Austria from the beginning of December, as Wochenblick reported.