It has been clearly demonstrated that even in fully boosted isolated groups, Corona outbreaks still occur. Therefore three jabs combined with negative tests provide no security for those who have been fearful of contracting Covid-19. Their ideal “zero Covid” bubble with no “unclean” unvaccinated people around offers them zero protection.

And while they are now trying to claim otherwise, every single major government health official and pharmaceutical executive had previously categorically declared that Covid shots would stop the virus.

On November 30, there was a Covid-19 outbreak on board the Artania even though the passengers and crew had been 100 percent vaccinated. The ship can accommodate up to 1260 passengers and 537 crew. Three fully vaccinated people on the German cruise liner died from the virus.

On December 5, CBS reported on the Norwegian cruise ship Breakaway. There were 3 200 people on board and the vaccination rate was 100 percent. The shipowner Norwegian Cruise Line required all passengers and crew to be vaccinated. At least ten people tested positive.

At least one crew member tested positive with the Omicron variant, according to Norwegian Cruise Line (NCL). The infected crew member was from South Africa and had undergone the ten-day quarantine required of employees who join the ship.

Most cruise lines offer so-called “safe bubble” excursions, where passengers do not come into contact with port residents when they go ashore, and NCL relies on all passengers being 100 percent vaccinated.

On the world’s largest cruise ship Symphony of the Seas, dozens of people have tested positive for the Corona virus during a trip. However, all 6 091 passengers and crew had tested negative before the journey commenced and 95 percent on board had been fully vaccinated. Royal Caribbean, the owner of the ship, told CNN that during the tour in the Caribbean, the virus inexplicably made its appearance.

In an effort to stick to the increasingly ridiculous vaccine narrative, the outbreak was blamed “cruise guests who use fake vaccination cards” and “breakthrough infections” while admitting that “no vaccinations are 100 percent effective in the first place”.

In the most recent Corona outbreak on the world’s largest cruise ship, 95 percent had been vaccinated and 100 percent tested negative.

The vessel had departed from the port of Miami on December 11 and stopped at St. Maarten and St. Thomas. Despite a vaccination rate of 95 percent and 100 percent negative tests, some of the passengers still became ill. Of the people who then tested positive, 98 percent had been fully vaccinated, the company said.

After one of the passengers tested positive, a broader source and contact investigation was immediately launched. This revealed 47 infected people. All those on board who tested positive were subsequently placed in quarantine.

An American combat vessel meanwhile reported that some sailors have tested positive for Covid-19. The crew had also been 100 percent “immunized”. Only some sailors showed mild symptoms while other were reportedly more seriously affected. In their press statement, the US Navy nevertheless comically declared: “The vaccine continues to demonstrate effectiveness against serious illness.” But the specific Covid variant detected on the fully vaccinated ship has yet to be determined.

The irony of this admission has apparently not struck them.

The US Navy deadline for all service members to receive mandatory shots “against Covid-19” was November 28. More than 98 percent of all active-duty sailors have been fully vaccinated, according to the most recent data.

The USS Milwaukee (LCS 5) was in the Atlantic Ocean, on December 16, 2021, deployed to the 4th Fleet area of operations to support Joint Interagency Task Force South’s mission to stop drug trafficking in the Caribbean and Eastern Pacific. The ship is currently in port at Naval Station Guantanamo Bay.

Vaccine failure is everywhere, writ large: More than 94 percent of American NFL players and 100 percent of coaches are vaccinated, but a total of 46 players tested positive last week, according to ESPN’s Field Yates, bringing the total to 154 this week and more than 300 in the past two weeks.

The Australian fiasco also keeps growing bigger as cases down under explode, even with 91 percent of everyone over the age of 16 fully vaccinated, strict mask mandates, quarantine camps, some of the longest policed lockdowns in the world and mandatory vaccine passports. 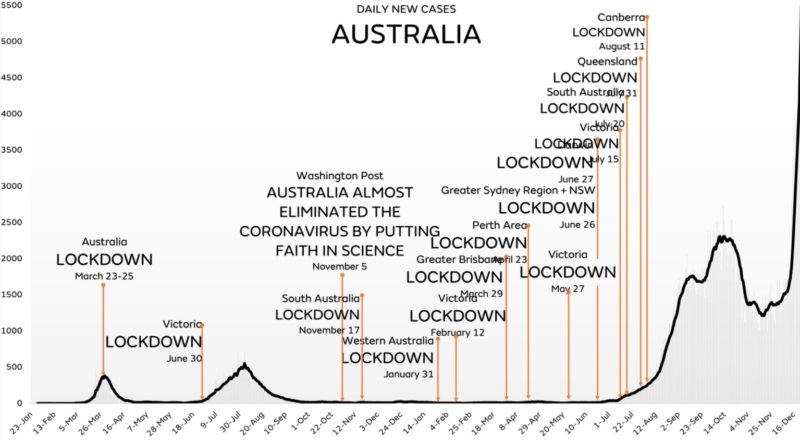 The failure of vaccines and Covid measures that will eventually come to haunt Australia. Data from Johns Hopkins University. compiled by IanmSC, Substack. Twitter