The European Central Bank could adorn its banknotes with the mugs of two Turkish vaccine producers. The proposal has come from the EU Parliament. The faces of the founders of BioNtech must be on the notes, said a German politician.

The European Central Bank (ECB) has received a suggestion from the EU Parliament for fresh designs on its legal tender from the FDP politician Moritz Körner. He has called for the two BioNtech founders Ugur Sahin and Özlem Türeci – sponsored by Bill Gates – to be pictured on one of the banknotes.

“Important European personalities” such as the founding couple of the pharmaceutical company should be printed on the new banknotes, the member of the European Parliament told German weekly Welt am Sonntag. Their work allegedly “saved the lives of millions of Europeans“. He offered no evidence for this lofty claim, perhaps because none exist.

The fawning Körner added: “Their lives are an impressive story of integration, advancement, entrepreneurship, academic excellence and the potential of an open immigration society.” Until about 2018 this company had recorded neither successes nor any profits, but that changed suddenly with the appearance of Sahin at the World Health Summit together with Bill Gates, Angela Merkel and WHO boss Tedros and the €50 million gift from the Bill and Melinda Gates Foundation. 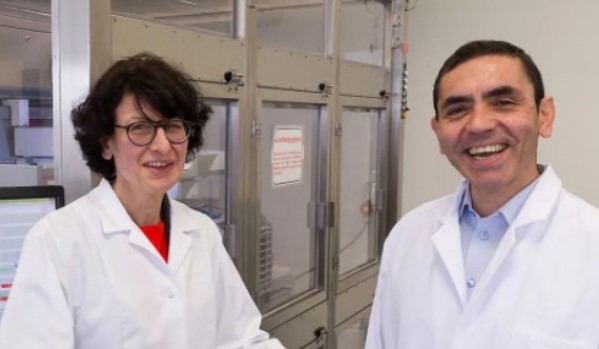 In the wake of the Corona pandemic, the Mainz vaccine manufacturer BioNtech managed to develop an approved vaccine against Covid-19 based on the so-called mRNA technology, he said. But it could also be an indictment rather than a promotion. How did they know that a pandemic was about to sweep across the globe?

Some twenty years after the introduction of the Euro, the European Central Bank has started a process of redesigning the banknotes. Citizens have been invited to share their thoughts on this. It will take years, however, before these revised notes are released into circulation. In 2024, the Governing Council will decide on the production of new banknotes and when they will be released, according to dpa.

All qualifications are equal

Meanwhile, an editor of the German business daily WirtschaftsWoche has been busy manufacturing consent for a multicultural society, soon to be reflected on the banknotes: “Germany must finally become a country of immigration!”

Sophie Crocoll, like Moritz Körner, also fantasizes about skilled workers welcomed into the country in as large a number as possible in order to prevent Germany’s economic strength from diminishing. Turks, Africans and Arabs should pay for the pensions of the baby boomers who will be exiting the labor market in the coming years.

Any well-informed person who is reasonably familiar with the reality of German immigration policy, however, will be alarmed at the sheer stupidity of Crocoll’s notion of a “skilled worker”.

She argues that the central problem is the fact that the professional qualifications of many immigrants are not recognized in Germany.

But if the car dealer from Rabat has been unable to work in Germany as a mechatronics technician and the medicine man from Burkina Faso as a surgeon, it may be because their qualifications are lacking. Crocoll dismisses such distinctions. The “skilled workers” who have not turned their poverty-ridden homelands into thriving economic landscapes, will somehow manage to do so in Germany according to her.

The truth is that Germany’s immigration policy has been hinged only on one single issue: the generous German social system. It attracts people who make a living from government benefits and there are several million of them worldwide willing to drown in the Mediterranean for these hand-outs.