The Spanish government has given the people a New Year's present that could hardly be more totalitarian: On December 31, 2021, the socialist Prime Minister Pedro Sánchez and his colleagues published the Royal Decree (1150/2021) on the National Security Strategy. It has been in force since January 1, 2022.

The text of the law describes in detail over 30 pages what the new national security plan will look like. This makes two things clear: There is no longer any separation of powers in Spain and “disinformation” – in addition to possible attacks that could be carried out by sea, from the air or by land on Spain – is now the fourth major threat to state security. [Real Decreto 1150/2021, de 28 de diciembre, por el que se aprueba la Estrategia de Seguridad Nacional 2021. – 31 December 2021]

The government has decided that it must take a number of measures to “prevent disinformation that could endanger democracy”, which is essentially a decree that would criminalize anything that threatens their grip on power since the decision-making power to define “disinformation” is now completely in the hands of the government.

“This Royal Decree is issued on the basis of the powers provided for in Articles 149.1.4.a and 29.a of the Spanish Constitution, which give the State exclusive competence for defense and the armed forces and for public security… The Government is empowered to: to issue as many provisions as are necessary for the development of this Royal Decree.” 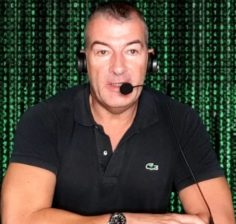 Aitor Guisasola, a Spanish lawyer, has been following the Great Reset in Spain. Facebook

In a video on his YouTube channel Un abogado contra la demagogia [A lawyer against demagogy] Aitor Guisasola commented on the decree: That means, they are issuing a decree on national security, for example on disinformation, and they determine which regulations they consider necessary to ensure compliance with and development of this decree. That is kafkaesque. They allow themselves to determine whatever they like.”

And the biggest problem that Sánchez has identified for national security in the context of the Covid “pandemic” is “disinformation”. In Chapter 3 the decree states: “Disinformation campaigns have a clear impact on national security and must be differentiated from other factors such as fake news or misinformation. In fact, disinformation campaigns do not necessarily contain fake news, but aim to distort reality through manipulated content. In this sense, the cognitive realm is another space in which to exert influence, in addition to the traditional physical realms: land, sea and air.

“The elements of a disinformation campaign include a will to create confusion and undermine social cohesion, the coordinated use of different media for the creation and distribution of content aimed at a wide audience, and malicious intent to discredit or influence the target of the attack. Disinformation campaigns therefore pose a serious threat to electoral processes. The disinformation strategies of foreign – state and non-state – actors who set up propaganda machines to polarize society and undermine their trust in the institutions are potentially dangerous.”

Guisasola assessed the situation as follows: The executive will be dictating laws whenever they feel like it, and the judiciary has to obey the executive. There is no longer any separation of powers in Spain. How can one have confidence in such institutions? The government determines everything. And that’s why the institutions cannot function properly.”

In its royal decree, the government also stipulated that counter-espionage must be used due to the dangers posed by freedom of expression. And it is also evident that they count on the full support of the EU: “Public-private partnerships, particularly with the media and social media providers, and raising public awareness are key to detecting and addressing disinformation campaigns. The national initiatives are coordinated with existing plans at European level, such as the Action Plan for Disinformation and the European Action Plan for Democracy.”

Guisasola concluded that  the point of the National Security Strategy was to shut down the independent media. “This is what our government is concerned about. It is really overwhelming. Anyone who does not take the government’s line, who thinks differently about what is happening in the world or in Spain, is spreading ‘disinformation’. And the government doesn’t want there to be ‘disinformation’, it wants us all to think the same way – like in China. This is what the government wants […] If we obey, there will be no problem and we must thank our government for letting us eat and live every day. That is the strategy for national security.”

Totalitarian laws against the backdrop of unprecedented vaccine failure

Just over a month ago, The New York Times asked if Spain’s high vaccination rates would help it weather the new variant

Well New York Times, I uh…think the answer was no pic.twitter.com/S3x1YDBMAY

In analyzing the data globally, one Substack author noted that there was “no scientific, rational justification for a continued belief that ‘interventions’ matter”.

“The Experts™ have failed, the media is spreading easily disproven disinformation, and local officials are openly lying to justify policies they desperately want to implement, based on zero evidence whatsoever. Covid policy is a complete disaster; a useless, destructive intrusion on the lives of millions of people, and to anyone paying attention it is blatantly obvious how hopelessly out of their depth politicians and their favored band of credentialed activists actually are.”