The First Lady of France could end the suspense of the disappearance of Jean-Michel Trogneux in the blink of an eye, by appearing in the simplest of clothes: A birth suit. Especially since the French are not overly sensitive about nudity.

Obviously, in the case at hand, it would be a less appealing prospect, but the only effective one to put an end to the gossip.

In order to pay tribute to the unexplained disappearance of Jean-Michel Trogneux, the “brother” of Brigittte Macron, a promotional operation has been launched: That of the Perruques Jaunes, the Yellow Wigs.

Rumours persist that the French Head of the State who wants to “piss off” his fellow countrymen, had been the object of statutory rape by his drama teacher at the age of 14. On Saturday, February 12, 2022 and during the whole campaign, freedom demonstrations will be marked by Yellow Wigs.

“To get a wig, it’s very simple, there are some in every costume shop or by mail order. The model shown on these pictures is available for example in a Parisian shop, 22 bis rue Montmartre or on the website, for the modest sum of 8,9 €. But don’t worry: the investment will easily be repaid on the motorway service areas with our trucker friends on their way to Brussels,” the organizers said.

“At €10 per toll swipe, the wig will pay for itself in no time. That’s what we call convergence of struggles! Buy two or three or twelve for your friends, because wigs are like parties, the more the merrier! The current demonstrations with their outdated slogans (“We’re tired, we’re tired”; “Freedom! Resistance!”) will become happy occasions where we have fun at the expense of the tyrants.” 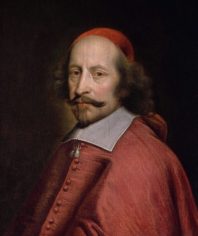 Towards the end of 1648 and up to 1653, more than four thousand more or less satirical writings directed, in large part, against Cardinal Mazarin saw the light. Wikipedia

Mocking rulers is an old French tradition, known as the mazarinades according to Wikipedia: “From the mockery of his Italian accent and his effeminate habits to the crudest attacks on his alleged love affairs with the queen and the conduct of his nieces, all sorts of insults are combined in the mazarinades against Cardinal Mazarin, who, according to all historical accounts, seemed insensitive to these attacks.”

A Telegram thread called “No Brain inside” dedicated to the curious past of Brigitte, launched the Yellow Wigs operation for all the demonstrations.

Since the publication in October 2021 of the investigation by Faits & Documents on the “Brigitte Macron Mystery”, a shoddy defence was orchestrated by the couple clearly struggling to put out the fire. Unable to file a complaint against Faits & Documents (which indirectly validates the whole investigation), the Macron’s handlers have been trying to light counter-fires without success.

On Sunday November 5, 2021, on the set of Vivement Dimanche on France 2, comedian Arnaud Tsamère delivered a sketch in which he pretended to have Emmanuel Macron on the phone. In this fictitious conversation with President Macron, the comedian says: “I take it the press knows? And he adds: “I suppose that Brigitte is shaken?”.

The decidedly unfunny sentence provoked laughter, then discomfort in the audience. Indeed, we understand that the reply was a rather nasty play on words: “I suppose that Brigitte was jerked off”.

Professional genealogists are currently investigating the Trogneux and Auzière families, the relatives of Brigitte.

“Those who pull the strings of the puppets used the Brigitte deception to force Macron to impose his pro-vaxx policy with the suppression of essential freedoms. They had a way of blackmailing him,” said researcher Alain Penoel.

A huge file is currently being compiled in web page format (.html) by a genealogist, Alain Beyrand. Photos, dates, extracts from surveys are presented.

Beyrand explained that “as a genealogy enthusiast, I am used to carrying out such investigations to find the parents of an ancestor, to weigh each hypothesis… The search for administrative or biographical archive documents [by journalist Xavier Poussard who launched the investigation] is well conducted”.

The author noted the absence in large numbers of key documents, which very quickly appeared suspicious. And the same goes for the inconsistencies that seem intended to confuse the issue.

The leftwing newspaper Liberation has stepped in to save the respectability of the presidential couple, presenting a “checknews”, which was taken up, for lack of anything better, in a few other newspapers but it contained no facts only ad hominem attacks.

Despite the enormity of the attack against Brigitte, the contrast between the seriousness of the case and the factual vacuity of their response, has further fuelled concern.

The suspicion is that Emmanuel Macron, born in 1977, married Jean-Michel Trogneux born in 1945, in 2007. Then Jean-Michel became his fictitious wife Brigitte, fictitiously born in 1953. The transformation allegedly took place at the end of the 1980s. Before, Brigitte did not exist or was “manufactured” a posteriori, after Jean-Michel disappeared.

The father of three children, become their mother, according to the hypothesis.

According to Penoel, this is “an Orwellian level of organized truth tampering at the top of the state”.

Penoel added: “The deception is much more serious than that of [President Francois] Mitterrand who hid his illegitimate daughter. There we have before us the glitter and the smoke of a curious presidential couple of a so-called start-up nation. The media sold us an angel who ensured with supreme grace the status of First Lady. And today we are discovering the other side of these storytelling images. The angel hides a sex that is not that of the front pages of the celebrity magazines that feature her. Mitterrand hid Mazarine, while Macron brandished Brigitte, it’s not the same level of deception at all. It is not a matter of having a ‘private life’, it is a large-scale embezzlement against the French and even world population.”