Conquest of Kiev airport could give Russia an air bridge

During the morning on Thursday, Russian airborne troops from the VDV captured the Ukrainian airport Gostomel just outside Kiev. Fierce fighting has now erupted around the airport, which is considered very important for both attackers and defenders of the Ukrainian capital Kiev. Last night, several loud explosions are said to have been heard in the Ukrainian capital of Kiev.

On Thursday morning, about thirty Russian helicopters were seen flying at low altitude in the direction of Gostomel Airport, also called Antonov, which is located on the outskirts of Kiev, northwest of the city. The sudden attack took the defenders by surprise and elite troops belonging to the VDV, which is the Russian equivalent of other countries “paratroopers” units, were able to conquer it after a brief battle with defending Ukrainian troops. 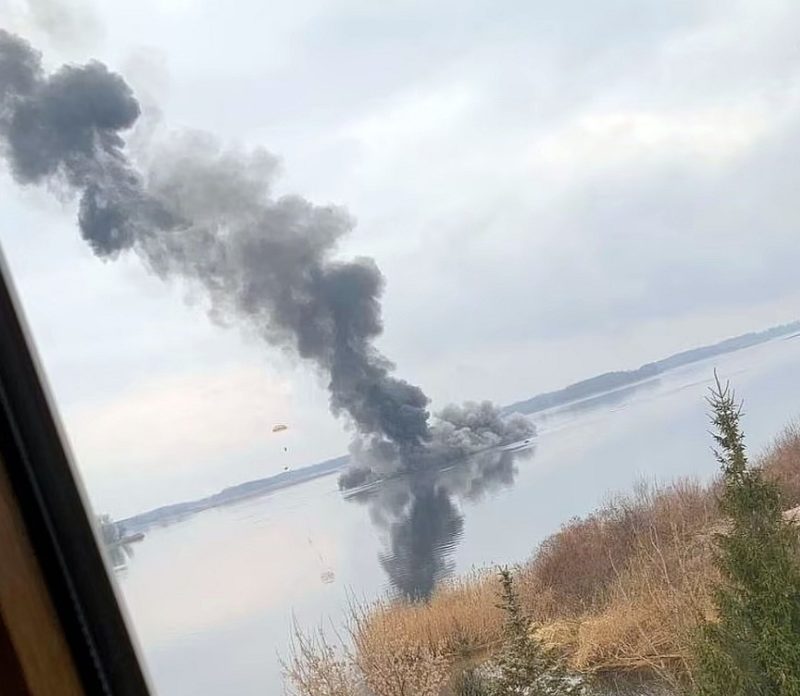 Shot down Russian attack helicopter outside Kiev. The parachute pilot falls towards the water in the Dnieper. Photo: Twitter

At least three of the Russian helicopters were shot down during the raid, which is said to have been 34 in total, according to updates from Ukrainian sources. One of the helicopters was captured on film when it was hit by a projectile before crashing to the ground. According to unconfirmed information published in the Daily Mail, one or more of the helicopters was shot down by a Ukrainian fighter jet. However, the information goes against previous information that says that all Ukrainian runways and aircraft were knocked out in the initial attacks early in the morning and the few fighter jets that managed to take off, flew to Romania.

Creating an air bridge for Russian troops and vehicles

Picture of VDV, airborne troops setting up defenses around the captured Gostomel airport around three o’clock in the afternoon. Photo: Twitter

“The troops you see over there are Russian airborne forces. They have taken over this airport,” he said during the broadcast and confirmed that he was allowed to film on the spot by the Russian troops who were seen carrying equipment and making preparations. Shortly after the film clip was broadcast, a counter-offensive was launched from Kiev.

Helicopter raids on Gostomel where, according to information, several MI-8 transport helicopters accompanied by attack helicopters over the airport before several of them were shot down.

According to information in the afternoon, heavy fighting was going on around the airport. The airport is important both for the Russians who want to be able to use it to fly in heavy transport planes with equipment and combat vehicles, but also for the defenders who need it to be able to receive munitions from the West – and to prevent a new Russian attack route so close to the capital Kiev.

US and its allies responsible for the situation in Ukraine

On February 15, 2022, the American Professor John Mearsheimer gave a lecture on the Ukraine crisis. He started out by explaining who was responsible: “The United States, mainly, and its allies are responsible for this crisis.”

It may be a small consolation for the Ukrainians that Russian President Vladimir Putin announced that precision weapons would be used to knock out Ukraine’s military infrastructure. Civilians are now taking cover in their basements and the subway, while explosions are heard in several places. But military installations are also manned by humans.

In addition, there have been reports that Russia has deployed the dreaded TOS-1 rocket artillery, which has been tested in Syria. It has a huge devastating effect and if used against Ukrainian defensive positions, one can expect many deaths.

And it is not just the Russian and Belarusian military that have attacked Ukraine. It is reported that many volunteers in Donbass, who repulsed the Kiev offensive in 2014, are participating and are highly motivated. Following the armistice and the Minsk Agreement, they were banned from firing on Ukrainian forces and were not allowed to reclaim lost land. They therefore resigned from the military service in protest. Now they have been recruited again and are leading the attack on Mariupol, which they believe belongs to the two breakaway republics. They also carry with them lists of “Nazis” who they believe are war criminals and should be arrested and convicted. 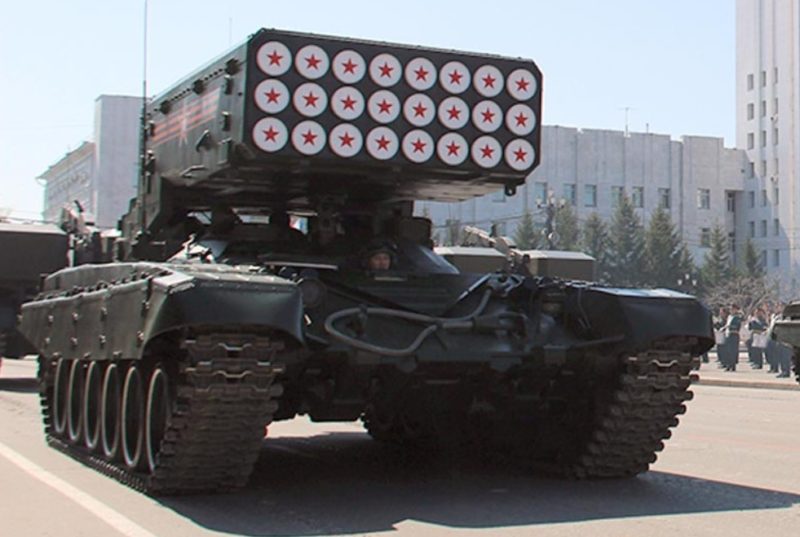 The dreaded Russian rocket artillery TOS-1 is said to have been used against Ukrainian troops. Stock Photography: tvd.im

Russia has so far only committed a relatively small ground force, but the nuclear reactors at Chernobyl have been secured by Russian troops. On the outskirts of Kharkiv in eastern Ukraine, Russians are said to have met with very little resistance and an entry into the city began on Thursday.

Russia has meanwhile refrained from using ballistic missiles and has only used cruise missiles so far. There have been no reports of electronic warfare and in all of Ukraine the Internet is working, with the exception of Kharkiv.

The US has been pushing its European proxies to commit economic hara-kiri through sanctions against Russia, including halting the essential gas pipeline to Germany, NordStream 2. “EU officials tell me: At this point Germany and Italy are the main opponents for disconnecting Russia from Swift and this ‘key decision’ depends on them. And they are pressured to agree,” one Israeli reporter for Kann News commented on Twitter.

This morning, “Ukraine was ready to hold talks with Russia to negotiate Kiev’s neutrality, but it must receive security guarantees,” said Mykhailo Podoliak, an adviser to President Zelensky.

No future in NATO

Ukraine will have a permanent border dispute with a region that is now openly militarily protected by the Russian army. Countries with a border dispute cannot join NATO, according to its charter, for obvious Article 5 reasons.