Drug addict Zelensky, allegedly in Kiev, saying the army 'will not lay down its arms and will defend itself'. Screenshot from Telegram

Day three: Setting up a hammer and anvil

The development in the southern city near Mariupol, points to setting up an anvil against which a hammer will deliver a blow to the Ukrainian forces enveloped along the line of contact soon. Donetsk and Lugansk Peoples Republics have engaged the defenders to keep the UAF forces in place and engaged, in anticipation of a Russian hammer to strike. “Highly mobile armored formations attacking out of the proximity of Kursk and Belgorod southwest towards Kharkov and Sumy will likely form the northern pincer of envelopment, while similar forces advancing out of the Crimean Peninsula will form the southern pincer,” the source pointed out.

According to the Russian Defense Ministry, Russian soldiers entered the Ukrainian city of Melitopol on the evening of February 25. According to the agency’s report, the Russian troops landed near the Ukrainian town of Azovskoye on the coast of the Azov Sea. No resistance was offered to them on the way. Residents greeted the Russian soldiers and older people took to the streets with red flags. Melitopol is now under the control of Russian troops. 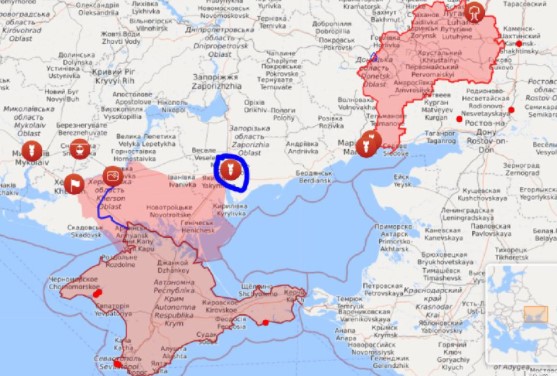 A Russian map with Melitopol circled in blue showing the advances moving up from the south, from Crimea. Screenshot from Telegram

“Ukraine’s military command said areas near the cities of Sumy, Poltava and Mariupol were hit by air strikes on Friday, with Russian Kalibr cruise missiles launched at the country from the Black Sea,” Reuters reported.

Ukrainian president Zelensky’s office responded to the latest developments during the night. “The situation is under control throughout Ukraine. Russia has no chance in Ukraine,” said the advisor to the head of Zelensky’s office. The Ukrainian leader’s curious remarks have increased suspicions of his drug abuse.

The Washington Post, citing US government sources, however reported that the Biden administration has discussed various security issues with President Vladimir Zelensky in recent days. There was also talk of safe places for the politician to hide “to ensure the continuity of the Ukrainian government”.

After the announcement of various Western sanction measures, Russian space agency Roskosmos suspended cooperation with European partners on launches from the Kourou spaceport and recalled employees from French Guiana in response. Dmitry Rogozin confirmed the move to Radio Sputnik.

In the first 24 hours, the Russian naval and aerospace forces first suppressed and then effectively destroyed the Ukrainian air defense network, its military aviation on the ground, and eliminated its small navy in short order. “This was achieved under an extensive EW umbrella that rendered command and control impossible by modern technical means. Precision munitions launched by Russian aircraft and cruise missiles employed by vessels of the Black Sea Fleet and the Caspian flotilla targeted and knocked out strategic leadership and command and control targets,” according to a source.

ANNA News reported that Azov fighters, on chat groups, have passed on rumors about the landing of Wagner mercenaries near Mariupol.

The fate of Mariupol will be decided in Volnovakha. The supply of the city is carried out through this logistics hub. At the moment, fighting is already underway on the outskirts of Volnovakha. Separatist DPR units are advancing with the fire support of the Russian armed forces, a source said.

Watch Yevhen Karas the leader of Ukraine's neo-Nazi terror gang C14's speech from Kiev earlier this month. Straight from the horses' mouth, he dispels the many narratives pushed by the left, the mainstream media and the State Department. pic.twitter.com/VWJqWPUGUp