Is this normal? No less than eleven biological warfare labs dotted all over Ukraine - an infestation. Photo: Twitter
Kiev

Russia may be targeting dangerous biological warfare labs in Ukraine

At least one document concerns the final stage of work on the launch of two bio-laboratories in Ukraine: in Kiev and Odessa. 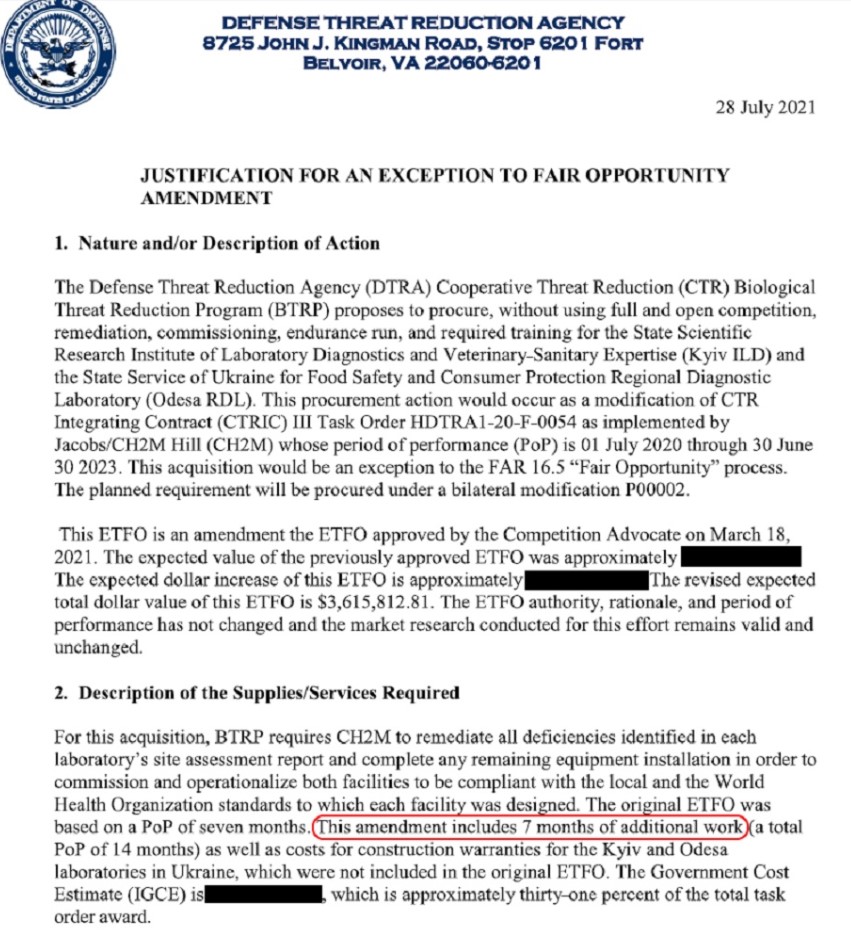 Screenshot of a rare undeleted document related to the Ukrainian biolab. Photo supplied

In October 2021, the US Defense Threat Reduction Agency (DTRA), a combat support agency within the United States Department of Defense (DoD), published an additional agreement on “combating highly dangerous pathogens”.

The additional agreement involved equipping and training of personnel as well as the commissioning of the facilities. The cost of the work was estimated at 3,6 million dollars, although some figures in the document have been redacted. According to the document, the laboratories were almost ready to start working. However, their completion was delayed from the date of signing the document (July 2021), and they were slated to begin at the end of February 2022.

According to a map circulating online, US-backed bio-labs are also located in Vinnystia, Uzhgorod, Lviv, Kherson, Ternopil, and near Crimea and Lugansk. At least 7 of the 11 biolabs have been destroyed by Russian advances according to some sources. The US has allegedly spent over 2 billion dollars on such programs in Ukraine alone, not including similar projects in Georgia, Kazakhstan, Armenia, Azerbaijan and Uzbekistan.

The laboratories in Ukraine were built within the US Cooperative Threat Reduction Program, which was launched in 1991 and aimed against Russia and the former Soviet Union. Curiously, cooperation between Ukraine and the United States in this field intensified after the first “Orange” colour revolution in Ukraine in 2005.

The Secretary of Russia’s Security Council, Nikolai Patrushev warned in an interview with the Argumenty I Fakty weekly in 2021 that the biological laboratories that the United States was creating around the world were endangering the health of tens of millions of people.

“The West frets over human rights but in actual fact it violates them on a massive scale. The biological laboratories that Washington is setting up across the globe imperil the health of tens of millions of people, thereby violating their rights,” Russia’s security chief said.

Ukrainian opposition MP Viktor Medvedchuk also denounced the activities of foreign bacteriological laboratories in Ukraine and said they were not transparent. He stated this on the air of Prime talk show that was broadcasted on 112 Ukraine TV channel. “Today we ask the question: show us what they are doing, how dangerous it is and it affects the national interests of Ukraine. The information available about other laboratories raises many questions. These are laboratories that have been opened in the former Soviet republics, Armenia, Azerbaijan, Georgia, Kazakhstan and Ukraine. We want to know what they are doing there,” he said.

Medvedchuk stressed that in some cases leaks from these biolabs had caused mass infections, spreading diseases that were atypical for Ukraine, and this had also not been fully investigated.

“How do we know what these laboratories are doing and why they are doing it here? Moreover, they study the genotype of Ukrainian citizens living in different regions of our country. What is the purpose of this? In order to preserve their health? In order to arm them with means of protection against dangerous diseases? Or based on the calculation of how the bodies of our people who live in the south, east, west, center of Ukraine can be influenced by one or another means that continue to be a means of biological and bacteriological research?

“Why has the United States been slowing down the negotiation on the Biological Weapons Convention for the past 20 years? Why are these negotiations not being held? So, is there any interest, is there any purpose? Moreover, we are talking about people’s lives, we are talking about people’s health, but there are also economic issues. And if these studies, let’s say, conditionally, are conducted for the purpose of economic sabotage, for example, in order to infect the livestock or other areas, will it be used as a means of combating economic competition?

“Whether it is in Ukraine, or it is just being developed in Ukraine and we should be talking about neighboring countries. Why should Ukraine turn a blind eye to this? Why Ukraine has no right to look, we mean the authorities, and check what is being done there, and how dangerous it can be? No responses, just an unwillingness to answer,” the MP noted.

In January 2016, at least 20 soldiers died of a flu-like virus while another 200 were taken to the hospital. Two months later 364 died in Ukraine of the swine fever virus A (H1N1) pdm09, the very same strain that caused the 2009 pandemic, Medvedchuk pointed out.

The Kiev State Research Institute for Laboratory Diagnostics and Veterinary and Sanitary Expertise and the Odessa division of the State Service of Ukraine for Food Safety and Consumer Protection were overseeing the construction of two new laboratories with the aid of the US. The main part of the Ukrainian collection of endemic strains of dangerous disease agents would have been stored in Odessa. The buildings of the new biolaboratories in Kiev and Odessa were built in 2019, but were not yet operational.

Moscow has expressed its concern over the developing biological weapons near Russia’s borders. Russian President Vladimir Putin previously noted the “purposeful and professional” collection of biomaterials of Russians by foreigners.

The on-going Russian military operation in Ukraine may therefore be aimed at stopping the DTRA program in Ukraine. The projects in Kiev and Odessa will now be postponed if not cancelled. Kiev may be in a rush to hide the evidence that the US violated the convention on non-proliferation of biological weapons.

The Protocol on the Prohibition of the Use of Asphyxiating, Poisonous or Other Similar Gases and Bacteriological Agents in War was adopted in Geneva on July 7, 1925. It was ratified by 65 States, which declared an absolute ban on the use of bacteriological weapons in military conflicts. However, the protocol did not specify mechanisms for monitoring, measures of State responsibility and procedures in case of its violation. This greatly reduces its value.

The Convention on the Prohibition of the Development, Production and Stockpiling of Bacteriological (Biological) and Toxin Weapons and on Their Destruction (BTWC) was signed on April 10, 1972. BTWC delineates microbiological and other biological agents or toxins that are not intended for preventive, protective or other peaceful purposes and includes all weapons, equipment or means of delivery intended for the use of such agents or toxins for hostile purposes and in armed conflicts.

Currently, 163 States are signatories to the Convention, but the lack of a verification mechanism has limited the effectiveness of the implementation of its provisions.

I think I found out why you guys are so interested in Ukraine. What exactly would a mistake bio weapons lab be located anywhere near there let alone 8 of them? pic.twitter.com/XvoqxYczvv

Russia missile strikes that led to 7 of 11 pentagon biolabs destroyed in Ukraine and nobody is talking about it. #worldwar3 #WWIII Do not be afraid, this isn’t a war against Ukraine, it is against the deep state. Truth about to EXPLODE for all to see. pic.twitter.com/DUMFEttU00