Civilians demanded that the Armed Forces of Ukraine (AFU) withdraw armored vehicles from residential buildings in Severodonetsk: “our basements are full of children!”. Photo supplied

EU, NATO, ISIS to join war on the side of Ukrainian Nazis

The EU has indirectly declared war with the Russian Federation in Ukraine after Josep Borrell, High Representative of the European Union for Foreign Affairs and Security Policy stated: "Another taboo has been lifted, the taboo that the EU does not provide weapons in time of war. Yes, we do. This war requires our participation..."

The European Union has joined the war on the side of the Ukrainian Nazis. The EU will now supply combat aircraft to Ukraine, crossing a red line. Also yesterday, Kosovo asked the US for a permanent military base and requested NATO membership.

The EU will openly supply weapons to Ukraine, including formerly “neutral” Sweden.

Denmark will send Ukraine 2 700 hand-held anti-tank grenade launchers and components for Stinger MANPADS. The country’s authorities will also not interfere with those who wish to travel to Ukraine to participate in hostilities.

Earlier, London announced the support of the British “volunteers”, and in Kiev they began to form a Foreign Legion that will include ISIS fighters from Syria.

According to a reputable Syrian pro-opposition Telegram news channel, al-Jasim older brother, Sa’ad, is a security commander in the ISIS-affiliated Hay’at Tahrir al-Sham (HTS) that controls the northwestern Syrian region of Greater Idlib. He is the cousin of a senior radical Islamist.

According to the Abkhazian Network News Agency, al-Jasim is currently preparing to funnel militants from Syria to Ukraine and some 200 militants have already signed up. They are reportedly amassing in the Turkish-occupied northern Syrian area of Afrin. 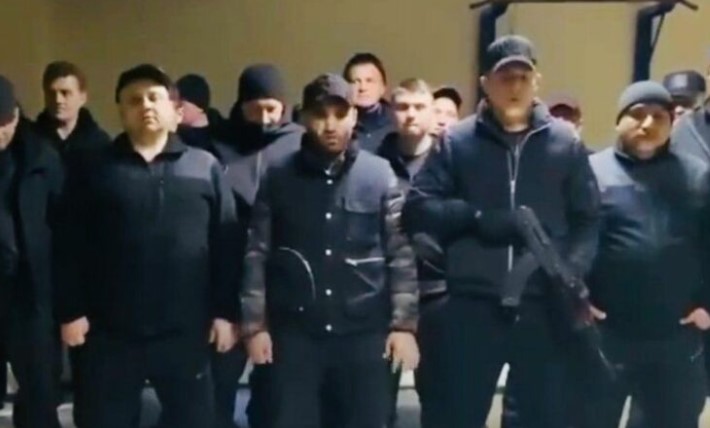 The al-Qaeda operative Tariq al-Jasim in the middle of his armed men as seen in a video he released on February 26, 2022. Screenshot from Telegram

Meanwhile fighting continues in the Ukrainian city of Kharkov with losses on both sides in both men and equipment. The Armed Forces of Ukraine have been filmed by angry residents while hiding equipment in urban areas. But there is little specific information on Kharkov yet. According to what residents, heavy fighting continues in the city. The real situation and control zones in Kharkov are unknown at this stage.

In Kiev, the RF Armed Forces advanced in the area of Gostomel and Bucha. Bucha was completely taken, but one of the columns ran into an ambush, there were losses in people and equipment. By evening, the city was in the hands of the advancing Russian forces.

The attack on Irpen was able to be repulsed by the Armed Forces of Ukraine with losses on both sides. The assault on Kiev was not undertaken. Fighting, as before, was around Kiev in order to encircle it. OSCE Chairman Polish Foreign Minister Rau has called for a ceasefire in order to evacuate the inhabitants of Kiev.

The LPR army advanced Severodonetsk. There too, the Armed Forces of Ukraine hid equipment in residential buildings, despite the protests of civilians. An offensive is underway in the north of the LPR.

In the DPR, separatist forces had great successes and Mariupol is virtually encircled with fighting continuing on the near approaches. Russian troops are moving from Berdyansk to Mangush. North of Mariupol, the DPR army reached Volnovakha and surrounded it during the day. The Mariupol-Volnovakha highway was cut off. 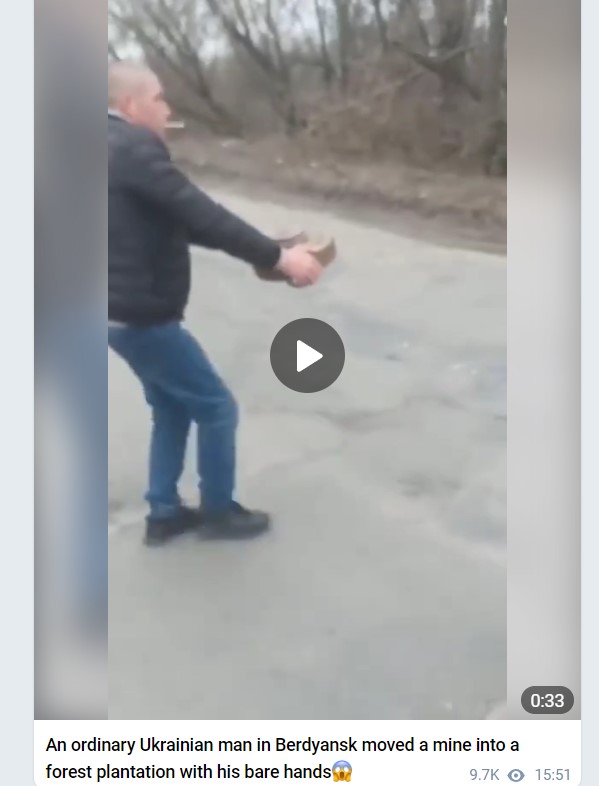 Brave Ukrainian local moving a mine out of the way for the Russian advance. Screenshot from Telegram

The army of the DPR showed itself as able after breaking through the layered defense, which had been built up for over 7 years. Some brave local residents were filmed coming to the aid of Russian troops.

In Zaporozhye, the Russian Armed Forces passed Tokmak yesterday and are approaching Zaporozhye from the south and southeast. Several settlements were taken south of Zaporozhye, heading to the northeast. One of the goals of the grouping is access to the rear communications of the AFU grouping in the Donbass. The Armed Forces of Ukraine are concentrating troops near Zaporozhye and Dnepropetrovsk.

The French media outlet Le Salon Beige has mapped the losses for Ukraine:

Boeing E-3 Sentry (AWACS) and Boeing E-8C aircraft have been spotted circling near the western borders of Ukraine in the airspace of Poland and Romania. These aircraft are reconnaissance capable. Together with a powerful constellation of US reconnaissance satellites in orbit, the headquarters of the Armed Forces of Ukraine have been spared a black-out of operational intelligence information.

Even though the Russian Defense Ministry daily reports on radar stations that have been destroyed, the fact is that the State Border Service of Ukraine is still reporting about the movements of Russian aviation.

The Ukrainian leadership meanwhile ordered the release of criminals from prisons and have been distributing weapons to them. The supply of weapons from NATO countries have also began.

This decision have brought relations between the Russian Federation and the West to a near freeze. Last night, the EU announced a package of new sanctions with a partial disconnection of Russian banks from SWIFT, blocking air traffic with and through the EU, closing the broadcasting of RT and Sputnik and a ban on transactions with the Central Bank of the Russian Federation.

First they stole billions of dollars of Venezuelan assets and gold. Then the US froze Afghan central bank’s assets

Now the EU is freezing half of Russian central bank’s reserves pic.twitter.com/KytRYCe7GS