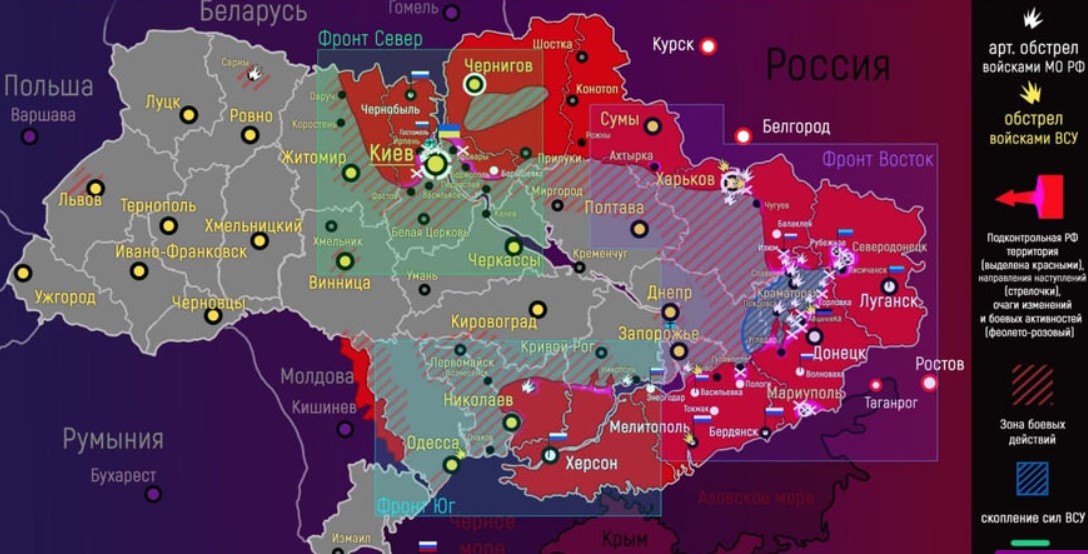 Day 23 of the Russian operation in Ukraine

There were new developments, especially in the diplomatic and political arena as Russians intensified their attacks on certain hotspots. The main focus of Russian operations is currently on securing and expanding conquered areas.

The 23rd day of the war began with heavy Russian bombardment against the western Ukrainian city of Lviv. Russian cruise missiles were reported to have hit the airport and suburbs, and fire and smoke could be seen in the city. Long-range high-precision weapons dealt a blow to the military infrastructure in the city, as well as ammunition depots and Ukrainian military equipment in the suburbs of Nikolaev and Voznesensk.

Meanwhile, Russia is increasing pressure on the Ukrainian capital, with fierce fighting reported from Kiev in the suburbs and on the outskirts of the city. The Ukrainian defenders are still holding their ground. The Russians have also intensified their offensives in the embattled cities of Mariupol and Chernihiv. The Ukrainian leadership has announced that it was still in control of the most important areas.

According to Ukrainian reports, at Chernobaevka Airport near Kherson in southern Ukraine, the Ukrainian armed forces ambushed the Russian military here for the sixth time and inflicted massive losses. A few dozen attack helicopters and a Russian command post were destroyed. Control over Kherson allowed Russia to restore fresh water supplies to Crimea; Ukraine cut off the water after the peninsula voted in 2014 to rejoin Russia.

Strikingly, Russian rocket and artillery fire was reported from all parts of the country on Friday morning, as Moscow seems to be moving into a hot phase of hostilities. Surprising for many experts however, is that the Russian fighter planes are only used in very limited operations over the Ukraine.

Russia has imposed a no-fly zone over the Donbass region, according to a Russian media report. This was reported by the Russian news agency Interfax with reference to a representative of the Donetsk People’s Republic.

According to Ukrainian reports, artillery fire on the northern Ukrainian city of Chernihiv intensified during the night, and the Russians have maintained a partial blockade of the city. The embattled city of Kharkov in the northeast and the southern and central Ukrainian cities of Kryvyi Rih and Dnipro also reported heavy rocket fire on Friday morning. Current fighting and shelling is increasing across the country, and Russian forces appear to be entering a new phase.

The Ukrainian General Staff reported in a situation assessment that in the Kiev suburb of Brovary, positions of the Ukrainian army were taken under artillery fire. In the south of Ukraine, Russian units tried to locate and destroy the air defence system along the Black Sea coast. In conclusion, Russian soldiers were concentrating primarily on securing their terrain gains and preparing new offensives.

The head of the Kiev regional military administration Olexander Pavlyuk said on Thursday evening that the Ukrainian army had launched operations to push back Russian formations from suburbs of Kiev. The war situation in the Kiev region is difficult, but currently “controllable”.

The most threatened areas are the road to the western city of Zhitomir, the towns of Butsha, Irpin and Hostomel close to the Kiev city limits northwest of the capital, and the town of Makariv further west of Kiev. There is also constant shelling in the district of Vishhorod north of the capital.

The map of March 17 showed the Russian army’s far-reaching territorial gains, in contrast to cartographic representations by Western media.

The thoroughly coordinated action of the Russian armed forces is now quite evident, according to French analyst Xavier Moreau. Russians have formed their units into three attack groups (evident from the map above in the coloured squares). Territorial gains are increasing little by little and strategically important cities and transport hubs in the north, south and east are now in Russian hands.

According to the statements of the General Staff of the Armed Forces of Ukraine, after the start of the counteroffensive to recapture the territories, Ukraine lost access to the Sea of ​​Azov.

The most tangible outcome of the operation is a change in the information sphere. In the early days a typical bureaucratic approach of the Russian Ministry of Defense was observed, which was harshly criticised as being inadequate. Unlike the Ukrainian side, the Russian Ministry of Defense reports every day on the destruction of their intended targets.

The continuous flood of visual evidence from the cellphones of Ukrainian civilians filming the destruction of critical facilities by Russian troops has been posing a problem for the initial Ukrainian information flurry which is now losing momentum. Even if they dominated the media space at the start, the information capabilities of the Armed Forces of Ukraine have been severely undermined by their own efforts to shape the narrative through too many fictitious representations.