‘Russia has no refugee camps’

A Dutch journalist embedded with the Russian army explained why many Ukrainians flee to Russia.

Freelance journalist Sonja van den Ende has traveled with the Russian army to southern Ukraine in recent days. “So many Ukrainians are leaving to go to Russia. Crimea is nearby and they receive shelter and help there. Russia has no refugee camps, but provides them with shelter, food and medical care.” 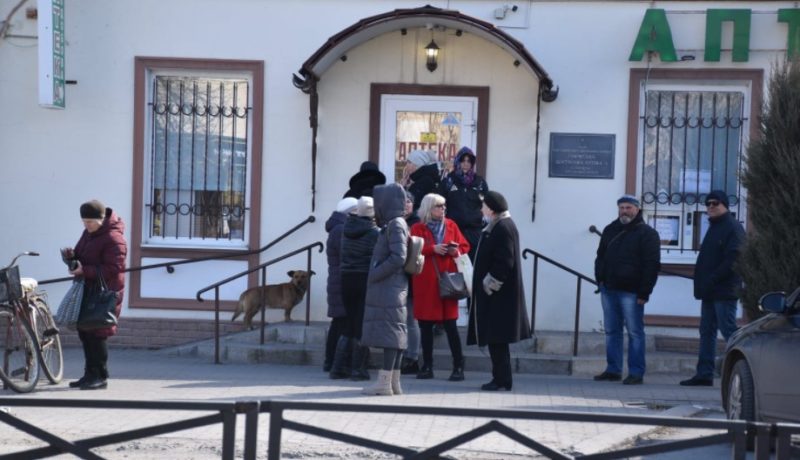 The journalist has seen large convoys of Russian military equipment and Russian soldiers passing on their way to the front. She has heard that the situation in eastern Ukraine was much more dramatic than expected and will report on it in the coming days.

“Many Ukrainians don’t want to wait and see how a totally inept [President] Zelensky, the puppet of the West, will take care of his people. Since its independence, the Ukrainian government has been totally unable to create a better economy for its own people,” writes Van den Ende.

“Crimea, as I have experienced it, is more Russian than Russia itself. Khrushchev, the Soviet leader , who came from Ukraine, gave it to the Ukraine at the time, but the majority in Crimea are ethnic Russians. Also Crimean Tatars, who were exiled under Stalin for collaborating with Nazi Germany. These Crimean Tatars have returned to Crimea under President Putin’s government, although many have continued to live in southern Ukraine, for example in Henischesk where I was. There are even mosques that are financed by Turkey. The Crimean Tatars are mostly Muslim.

“On our way to Henischeck, we passed the former Ukrainian border. When the operation began on February 24, 2022, the Ukrainians tried to resist, not the population, but the so-called army, […] Many burned-out cars were seen in an attempt by the Ukrainian army to blow up a bridge, which was unsuccessful.”

In Melitopol, a town under control of the Russian army, situated in oblast of Zaporizhzhya, where the Western press is saying that the Russian damaged the nuclear reactor on purpose, villagers who have family members working there, told Van den Ende that the nuclear power plant was not damaged. People were forced to hide in their houses or cellars to avoid being conscripted to either the Ukrainian army or the neo-Nazi’s battalions, who have been fighting alongside the regular Ukrainian army.

“They are playing the man, just like in the case of Syria, where President Assad was the ‘child murderer’. The West does not learn and has thus caused a third world war with its stupid, dangerous rhetoric. Not Russia, but the West has continued this demonization for years,” Van den Ende highlighted in an article on her website.

“So much fake news, it appears they’re using a child again, like in the Syrian war, a new Bana, called Amalia. Now she sings instead of writing, same script. Russian soldiers raping women, really? I didn’t see it and I am a woman.”

Bana’s ability to design trendy hashtags and tweet from an area in Syria in 2016 that did not have electricity or internet, was quite a marvel to behold. Within two days of setting up the account, the 7-year-old had used #HolocaustAleppo, #MassacreInAleppo, #StopAleppoMassacre and tweeted at Russian President Vladimir Putin, US President Barack Obama and Syrian President Bashar Assad. According to some sources, the account had been registered in the UK.

When independent reports from Aleppo in Syria eventually emerged, it showed civilians fleeing with ISIS jihadists withholding supplies and shooting at those trying to leave through humanitarian corridors. Bana’s tweets were curiously totally at odds with these reports.

The West is more concerned with LGBT and climate issues than seriously considering the threat they themselves have created, Van den Ende added.