György complained about the participation of transsexual swimmer Lia Thomas in the US college championships. “I think it is disrespectful to biologically female swimmers,” she said in a letter to the organisers, the National Collegiate Athletic Association (NCAA). 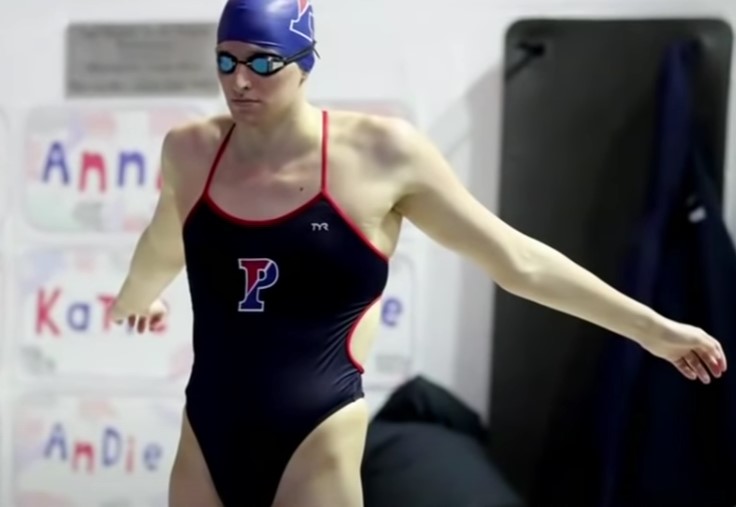 William “Lia” Thomas has saved his sinking swimming career by competing against women. Some female participants have complained about his genitals not being covered correctly by a female bathing suit. Thomas has not had his private parts surgically removed yet although he claims to be a woman. Screenshot from YouTube

Thomas finished first in the 500-yard freestyle (457.2 metres) on Friday. The male swimmer was born a man but “identifies as a woman”. In past competitions, when he competed against men, he finished poorly. By changing gender, he was able to significantly increase his chances of winning.

The top 16 women qualified in advance for the discipline at this year’s championships. György, who competed for Virginia Tech University and was at the 2016 Summer Olympics, missed out by one place.

“I feel the last spot was taken away from me because the NCAA decided to allow someone who is not a biological female to participate,” her letter continued. The Hungarian tried to sugar-coat her complaint by sympathising with Thomas, who had prepared “just as hard” for the competition. Her criticism, she said, was only about the biological component.

Former Czech tennis player Martina Navratilova also commented on the case. “It’s not about her personally. It’s about the fact that she finished 200th, 300th, 400th as a man. Now she is finishing first. The rules need to be changed. This is not a fair fight,” she told US broadcaster NewsNation.

Even before the competition, there had been protests against Thomas’ participation. Several women demonstrated in front of the swimming hall in Georgia and chanted: “Save women’s sports”.

The girl who lost her spot in the NCAA swimming championship just got suspended from Twitter for her post about Lia Thomas. pic.twitter.com/ERI1nD6UsZ

In a letter bearing the governor’s seal, DeSantis declared that his state would not perpetuate a fraud by accepting Thomas’ performance as a true victory. Instead Florida would consider second-place finisher, University of Virginia student and former Tampa Bay-native Emma Weyant as the genuine champion of the NCAA Division 1 500-yard freestyle race.

“By allowing men to compete in women’s sports, the NCAA is destroying opportunities for women, making a mockery of its championships, and perpetuating a fraud,” tweeted DeSantis on Tuesday. “In Florida, we reject these lies and recognize Sarasota’s Emma Weyant as the best women’s swimmer in the 500y freestyle.”

He said at a press briefing that the NCAA was destroying women’s athletics. “They’re trying to undermine the integrity of the competition, and they’re crowning somebody else the woman’s champion.

“We thought it was very important that young girls and women athletes in the state of Florida had the ability to work hard, to realize their dreams and to compete fairly whether it’s in swimming, whether it’s in track and field, you name it. And that’s something that was really meaningful to a lot of people in Florida, particularly people like me who are parents of young girls.”

By allowing men to compete in women’s sports, the NCAA is destroying opportunities for women, making a mockery of its championships, and perpetuating a fraud.

In Florida, we reject these lies and recognize Sarasota’s Emma Weyant as the best women’s swimmer in the 500y freestyle. pic.twitter.com/tBmFxFE3q6

Biden plans to fight Russia to the last Ukrainian

KievPresident Joe Biden is gearing up for a war with Russia over Ukraine. On Wednesday, a group of US Democratic senators introduced a bill that would authorize an additional $500 million in military aid to Ukraine, on top of the $300 million that has been given to Kiev by the 2022 National Defense Authorization Act.