In the spirit of supranational organizations and globalist interest groups of "global governance", another hurdle is to be cleared on the way to the EU central state in May: The change in the electoral law for the European Parliament is up for voting.

From now on, “transnational lists” with candidates from various member states are to be increasingly elected, and no longer national candidates. This further reduces the connection between voters and their “representatives”. 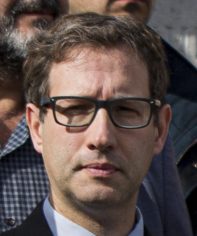 Domènec Ruiz Devesa put forward the single list motion to essentially disempower nation states. Since 2021, he has been part of the Parliament’s delegation to the Conference on the Future of Europe. In addition to his committee assignments, Ruiz Devesa is a member of the European Parliament Intergroup on LGBT Rights. Wikipedia

In the shadow of the Ukraine war, supporters of a strictly centralized European Union continue to disempower the member states. At the request of the socialist MEP Domènec Ruiz Devesa, the European Parliament’s Committee on Constitutional Affairs supported a legislative initiative by 19 votes to nine at the end of March, which is intended to replace the current European Electoral Law for the European Parliament (EP).

The MEPs are now to be elected from Europe-wide lists of candidates. The voters do not know these representatives in the slightest and they no longer have any linguistic or cultural ties with these individuals. From the point of view of the proponents, a “European identity should be strengthened”; however, the exact opposite is the case.

The “geographical representation” of the lists is also supposed to ensure that smaller member states are not “disadvantaged in competition”. A new European electoral authority is to be responsible for registering the lists. The EU-wide lists of candidates are to be submitted by European electoral bodies.

FPÖ and AfD are resisting, but old parties want to abolish themselves

The proposal still has to be voted on in the EP plenary session on May 3. All EP groups in which Austrian parties are represented (European People’s Party – EPP (ÖVP), Social Democrats – S&D (SPÖ), Liberals – Renew (NEOS) and Greens (Verts/ALE)) have already voted in favor of the proposal. Only the rightwing FPÖ voted unanimously against it. The situation is similar in Germany, where all the old parties except for the anti-immigration, rightwing AfD are in favor of the initiative.

The FPÖ MEP Dr. Georg Mayer explained the push to Austrian weekly Wochenblick: “The new EU electoral law is a foreshadowing or the next step in the planned establishment of the EU unitary state. Austrians should be forced to vote for any candidate from Spain, Malta or Greece that they don’t even know or understand. That is completely absurd and highly questionable in terms of democratic policy.”

The principle according to which each member state appoints and sends its representatives in the EU Parliament is to be broken up and effective representation of any country prevented.

“It should also be a goal of this reform to eliminate the barriers that hinder the rights to vote of persons with disabilities, members of minorities or as a result of residence in a different country.

“Arguably, the purely political dimension of the elections is more important than the legal framework. It remains challenging to generate a pan-European debate, one that can surpass the noise of 27 simultaneous national elections that often revolve around domestic issues or examine the national government in office,” according to the Spanish politician.

Even as an MEP, Georg Mayer knows that the electorate in a representative democracy needs a connection to their politicians and he is against the abolition of the national lists.

The bill would disenfranchise millions of European voters on the basis of a residence qualification and deprive them of the right to vote for someone who has their local (and best) interests at heart.

Mayer held the ÖVP responsible for this development: “All this is only possible because parties like the ÖVP, which at home always pretend to represent national or Austrian interests, bow down to Brussels and vote for more centralization and disempowerment of the citizens.” On May 3, there is still the opportunity to correct this massive mistake during the vote in Strasbourg.