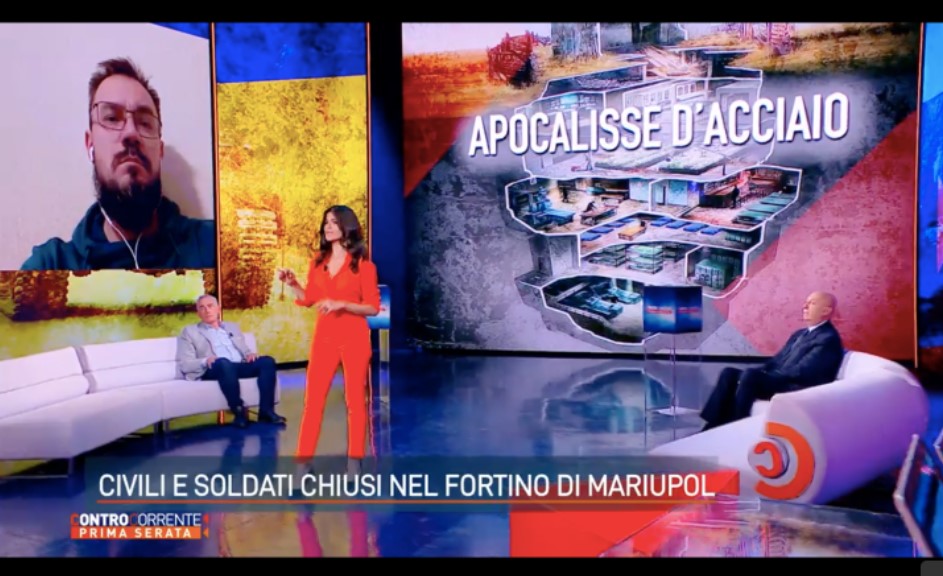 Screenshot of the programme Controcorrente of 20 April 2022

In recent weeks the attention of Italian TV talk shows has focused on the Russian attack on the Azovstal steel plant, which is located near the Ukrainian city of Mariupol. The huge industrial plant has become one of the symbols of a growing Ukrainian dilemma: Hundreds of Ukrainian civilians and soldiers are huddled in the underground tunnels of the plant.

Italian television aired a very detailed rendering of an alleged underground bunker of the Azovstal steel plant, showing five floors, a research laboratory, a vegetable garden and a dormitory. This scoop was surprising, since no independent witnesses had had access to the site after 24 February 2022 (the first day of the conflict). Moreover, the existence of such a particular structure with a “garden” connected to the steelworks site has never been confirmed.

The reason for this is that the image does not show a bunker in Ukraine, but is one of the illustrations created for a board game that never went into production.

This fact did not prevent some top national TV programmes from broadcasting the image on Controcorrente on 20 April 2022, as the bunker mentioned frequently in the battle around Azovstal.

Other shows repeat the fake diagram

The next day it was the turn of the La7 programme Piazzapulita, which in the early evening of 21 April 2022 aired the same image, presenting it as “a section of the Azovstal steelworks” and citing as its source a “Russian political scientist”.

On the same day, the image was also broadcast on Rai 1 by Porta a Porta. According to Bruno Vespa, the image is “a graphic from the Messaggero” showing a real “city” under the Azovstal steel plant.

The image was actually made in 2015 to illustrate the “underworld” of a board game called Blackout, a project that was never realised due to the failure of the crowdfunding campaign that was supposed to raise the funds for its realisation. The author, an American named Richard T. Broadwater, managed to raise only 14 000 of the approximately 50 000 euros needed.

The game was to be set in a post-apocalyptic world infested with “parasitic creatures” that force the human population to live in bunkers (like the one in the illustration), except for a team of mercenaries able to deal with the creatures on the surface.

The prototype of pre-war metallurgical plants in the former USSR is in fact a plant project in the city of Gary in the US, with a typical steel plant design. In addition to the Gary plan, the Russians added a storm drain and large chimneys, because serious gas cleaning units were not used at that time, but it was necessary to remove flue gases with a high content of fine dust. It was also equipped with a civil defense system in Mariupol. 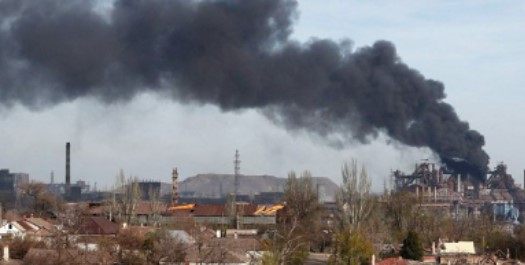 Thick smoke rises from the Azovstal complex, April 25. The head of the Donetsk People’s Republic, Denis Pushilin, on the Russia 24 TV channel, said that about 400 foreign mercenaries are blocked in the Azovstal plant in Mariupol.

Russia has allowed the mercenaries trapped in the plant to conduct their communications in order to intercept their interactions with Kiev. The Ukrainian military who remained at the Azovstal plant in Mariupol have been asking for permission to be evacuated to Turkey, according to DNR head Pushilin.

As a result of the request, in Mariupol, a truce was declared for several hours on Monday. The Armed Forces of the Russian Federation waited at a safe distance from the metallurgical plant and organized a humanitarian corridor for the exit of workers, women and children, but none of the civilians ever came out, despite the fact that the Azov militants allegedly “worry” about their fate underground. The humanitarian corridor therefore did not work as expected.

Meanwhile, the new mayor of Mariupol announced that the Azovstal plant would not be restored, while the Ilyich Iron and Steel Works and Azovmash would be.

The commander of the fighters trapped underground, has pleaded with the world to save them. Serhiy Volyn reported on the critical situation for the Armed Forces of Ukraine and the Nazis at the plant.

There are a lot of wounded, and every day new deaths are recorded. The situation is deteriorating, and they are experiencing problems with ammunition, medicines, food.

The brigade commander of the 36th brigade refused to blame President Putin and generally recognized that the situation was extremely critical and it was no longer possible to solve it by military means.

EXCLUSIVE: #Macron has abandoned at least 50 French officers to death in #Mariupol. There are French military & intelligence officers in #Azovstal Factory who are there for training Ukrainian and neo-Nazi fighters. Macron forbid them to disclose or surrender before the elections. pic.twitter.com/IHhG9lpXiP