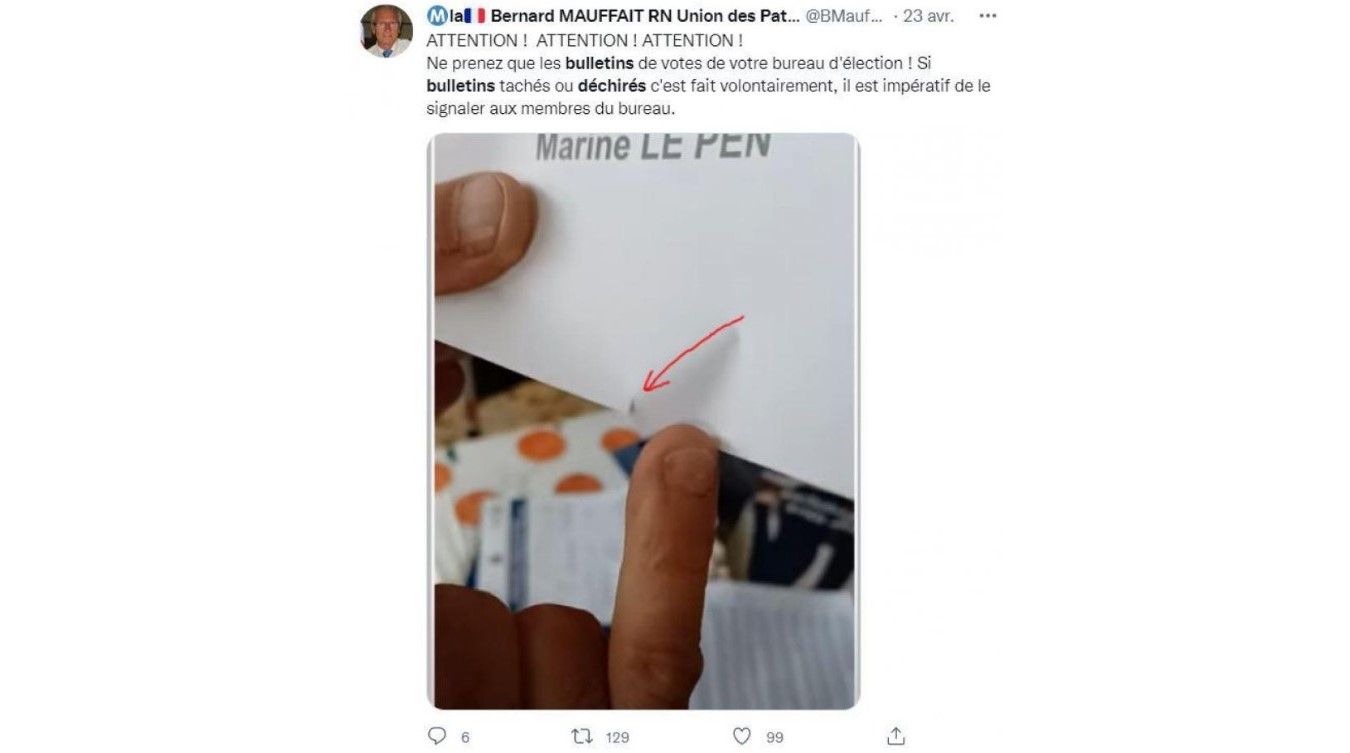 A ballot for Marine le Pen with a tiny tear is invalid. Photo supplied
Paris

As with almost all recent elections, even in so-called "stable democracies", allegations of irregularities appear on social networks after the results have been announced. An example is the presidential election in the US in 2020, or the Swedish election in 2018, where the electoral authority's system crashed and SD's figures had fallen sharply when the system started up again. There were also reports of missing or destroyed ballot papers. Now the same phenomenon seems to have occurred in France.

Several social media users in France reported incidents with the election materials they had received in their mailboxes. It is stated that many voters had a small, barely noticeable, tear mark on the ballot paper that applied to Marine Le Pen, something that makes the ballot paper invalid.

Invalid ballot papers, in the same way as blank ballot papers, do not count. The Constitutional Council justified this decision as follows: “The President is elected by an absolute majority of the votes cast. Reconciling blank votes to the votes cast: would make it more difficult to decide the first round; would prevent the election in the second round if the candidate who received the most votes did not receive more votes than his opponent’s plus blank ballot papers.”

As soon as the results were announced, on the evening of Sunday, April 24, the two candidates acknowledged the election result. But far from everyone did the same.

Wendy Rogers, a senator from Arizona, accused Senate Republican leadership of “colluding with the Democrats”. Twitter

On Sunday evening, a feature of the TV channel France 2 with an error in the figures was immediately interpreted as proof of electoral fraud. In conflict with the stated result of 58,5 percent for Emmanuel Macron, the number of votes was shown, something that instead gave the win to Le Pen. Despite the messages from the editors who explained that it was all due to a “technical error”, the rumor continues to circulate.

On Tuesday, a “citizens’ collective” demanded a recount of votes, or even a re-election. A power of attorney is circulating to authorize two lawyers to represent “deceived voters” in the “election fraud case”.

This, of course, is reminiscent of the reactions in the United States following Donald Trump’s defeat. This has led to some American politicians commenting on the French election and Wendy Rogers, a senator from Arizona, tweeted shortly after the announcement of the result: “Macron stole the election. Dig deeper, French patriots!” The tweet has since been tagged by Twitter as “misleading”, but the idea that the French election has been manipulated continues to circulate.

Almost a third of Marine Le Pen’s voters already believed that the election was rigged, according to a survey underscoring the widespread distrust with the electoral process, notably among supporters of the populist National Rally candidate.

The Ifop institute findings were published before the second round of voting. Some 14 percent of voters said the result of the election would be falsified, while another 31 percent said they did not know and only 55 percent were confident that there would be no fraud.

Among Le Pen’s voters, 30 percent thought that the election was rigged.