Is Spain on the verge of national bankruptcy?

Spain is not only one of the European countries where the Corona hysteria was successfully enacted, but also the fifth most indebted country in the world. State bankruptcy seems to be just around the corner. That is why the left-wing socialist government is in the process of passing a law allowing expropriations of private property and a "corralito".

The latter means that the state can access the savings people have in their bank accounts. In such “crisis situations”, the citizen would only have the right to withdraw smaller sums. The rest of the money could be “temporarily” confiscated. The maximum amount would be determined by the authority of the respective country, the portal La Información explained in March 2021.

At that time, the portal still claimed that this would only affect sums over 100 000 euros. But that is water under the bridge: On 26 May 2022, the left-wing socialist government of Pedro Sánchez announced that the tax authorities could now confiscate all savings exceeding the minimum wage.

A “corralito” could be ordered from one day to the next, just as it has already been carried out in Argentina, Cyprus, Greece or recently in Sri Lanka, Spanish lawyer Aitor Guisasola warned last week.

Is the lawyer exaggerating in his assessment? Not necessarily, since Spain’s public spending is extremely high and inflation is rising just as rapidly as the national debt. As early as May 2021, the financial journal El Economista reported that Spain’s public debt had risen to 125,3 percent of GDP and had reached a peak not seen since 1881.

Not surprisingly, the situation has deteriorated further. On 17 May 2022, the Spanish mainstream let it be known that the national debt had reached its highest level ever in March: 1,45 trillion euros.

“Spain is finished,” Guisasola stated. He believes the possibility of preventing national bankruptcy is now almost impossible. The American Janus Capital Group and the British Henderson Global Investor, concluded that Spain was one of the countries whose public debt has grown the most in recent years.

In fact, Spain’s public debt has grown by 347 percent since 1995 , three times faster than its Gross Domestic Product (GDP). Henderson actually pointed out that Spain was the fourth most indebted country in the world and the year 2020 alone was comparable to eight years of indebtedness.

“Compared to the size of the world economy, debt levels have reached their peak (…) It is incredible that more than half of the new government securities in 2020 were financed with newly created cash by central banks.” If foreign investors jump ship in Spain and exchange rates fall, the country can quickly slip into a debt crisis and go bankrupt.

In the case of bankruptcy, a government in such a precarious situation would have to initiate refinancing through further public debt. However, the European Central Bank already announced in March this year that it would not buy any more debt. Moreover, interest rates have already been raised. 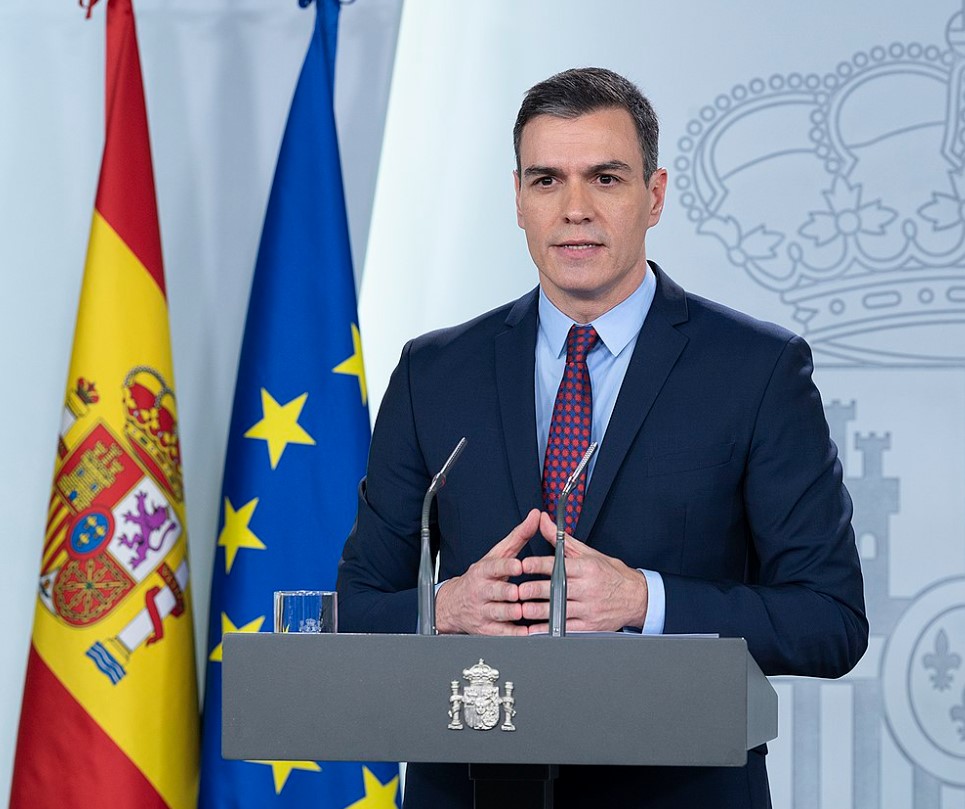 Spanish Premier Pedro Sánchez announcing the state of alarm on 13 March 2020. He has faced stiff opposition from the Constitutional Court. As was the case with the decree of the state of alarm or the suspension of activity in Congress due to the first wave of the pandemic, both regulations declared illegal by the Constitutional Court (TC), a reform of the Executive approved in the midst of a health crisis has been canceled again by the court of guarantees. By seven votes to four, the Plenary Session of the Constitutional Court this week invalidated the legal modification made by the Government so that the Superior Courts of Justice were in charge of giving judicial endorsement to the health restrictions. Wikipedia

This means that refinancing will become even more expensive and taxes will have to be raised further, Guisasola explained. But no matter what the government does, the country cannot manage the public debt it has accumulated.

Pushing ahead with an expropriation law

For this reason, Guisasola assumes that the government will eventually declare national bankruptcy. And in order to access citizens’ property and private assets, the government is currently pushing ahead with a reform of the National Security Law (Ley 36/2015).

This has yet to be finally passed, but the lawyer is adamant that this will happen soon as the preliminary project has already been rubber-stamped by Congress with the votes of the PSOE and those of opposition parties such as the PP or the right-wing populist VOX.

The fact that state bankruptcy is a declared goal of the political decision-makers is currently also shown by the fact that Sánchez and his supporters are pushing up public spending even further in order to be able to justify the expropriations and the “corralito”. On 24 May 2022, El País reported that the government advertised a “record offer” for public jobs, with 44 788 positions available in ministries, the judiciary, police and army.

“The more civil servants they hire, the more support they will have in implementing their plans,” Guisasola pointed out.

And how is the masses taking this development? Because most are unable to see through the background of the staged “pandemic”, they have no idea what is brewing in the corridors of power. People believe that the reform of the National Security Law is only about changes that concern a “health crisis”, Guisasola said.

But Article 28 of the preliminary draft makes it clear that expropriation and confiscation of private property can be applied to any problem that is of “national interest”. In addition to health security, this includes economic and financial security, cyber security, maritime security, aerospace security or environmental security.