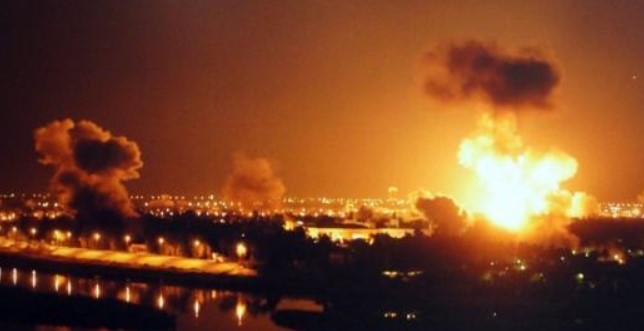 Bombing the capital of Iraq by the US and allies. Photo supplied

Jim Fitton, 66, arrived at court in Baghdad and was given a 15-year sentence after being convicted of smuggling antiquities. Fitton, a British citizen was found to have artifacts in his bag, along with fellow traveler, Volker Waldmann, when they were attempting to leave Baghdad airport on March 20. He is now back in jail until his lawyer can appeal the sentence.

Waldmann, a German citizen, has been found not guilty and is expected to be released. In the US-UK war on Iraq, Germany and France openly opposed the invasion, occupation, and destruction of Iraq, for regime change. One must wonder if the Iraqi judge’s decision was influenced by the role the United Kingdom played in the deaths and injuries of millions, as well as the destruction of the country’s infrastructure, which has never recovered.

Fitton, a geologist, was on an organized archaeology tour in southern Iraq when he picked up some stones and pottery shards while there and claims not to have known this was a crime.

Sam Tasker, Fitton’s son-in-law, commented that Fitton is well traveled, especially in the Middle East, and respects cultures and history. This assessment doesn’t quite square with the crime he has been convicted with. People who travel are well aware that you can’t bring home souvenirs that are not paid for lawfully.

The lawyer for Fitton, Thair Soud, said he would immediately appeal in a routine court review of the case in a week. “My client does not deserve this punishment. The antiques that were found with him were stones and pieces of broken pottery that had no material, or archaeological, value.”

Soud said, “In his house, you can find a lot of these things from different countries. He has a habit that wherever he goes he collects something from there. It could be sand or stone or anything that doesn’t have value, you can find many things like this in his house.”

It may be found that the statement by Soud will be damning to Fitton in this case, as it demonstrates a clear history of disregarding the property of countries he has visited.

The UK has left the European Union, but still has laws that are similar to French laws, and others in Europe. In France, if you collect sand, pebbles, stones, or shells it is punishable by a fine of up to 1,500 EURO. Cutting, or picking a flower in France may find you paying a 150,000 EURO fine.

In 2019, a French couple was arrested trying to make off with some sand collected in Sardinia, Italy. They face six years in prison. In Iceland and the Galapagos archipelago, regulations also provide for penalties up to prison terms for taking home souvenirs of rocks, sand, or nature.

Madelaine Gierc, a 16-year -old from Canada in 2005, picked up a rock while walking on a path in Greece, and was promptly arrested, charged, and jailed. Under Greece’s protection laws, it is illegal to buy, sell, own or excavate antiquities without a special permit, and the crime carries a maximum 10-year sentence.

The golden rule of travel

Arthur Frommer, the founder of Frommer’s series of travel guides, said travelers should follow the golden rule of treading into nature: “You leave nothing behind but your footprints. You do not tamper, you do not alter, you do not deface what it is that you’re visiting. You remember the word ‘respect.’ It should be uppermost in your mind that you show respect to cultural heritage.”

Is a single British man on trial, or does he represent Tony Blair?

Iraq suffered war-related deaths numbering possibly over 1 million, according to the 2007 Opinion Research Business survey. While it may be impossible to state the exact number, classified US military documents released by WikiLeaks in October 2010, recorded 176,382 injuries, including 99,163 civilian injuries between January 2004 and December 2009. The Iraq Body Count project has recorded a range of at least 185,194 – 208,167 total violent civilian deaths in their database.

British Prime Minister Tony Blair blindly followed US President George W. Bush in March 2003, into attacking, invading, destroying, and occupying Iraq without any provocation or justification. Blair was well aware there were no weapons of mass destruction in Iraq, and there were no terrorist cells there that were connected to the September 11, 2001 attack on the World Trade Center in New York City. A group of Saudi Arabian men, led by an Egyptian manager, Mohamed Atta, and at the behest and orders of a Saudi Arabian, Osama bin Laden, were responsible for the 9/11 horrific attack and mass causalities.

Bush sold Blair on a plan of regime change to turn Iraq into a democracy and begin the process of creating the new Middle East which would be submissive to Israel. Libya, Egypt, Tunisia, and Syria were regime change attacks by the US-NATO forces, including the British military. Libya is still destroyed and has had no stable government since the 2011 US-NATO project began. Egypt had a US-sponsored Muslim Brotherhood President installed by US election rigging carried out by the National Democratic Institute’s manager, Lila Jaafar, but has since revolted against the Radical Islamic group and over-threw the US puppet Morsi. Tunisia has also refused to be a Muslim Brotherhood-controlled country, and the US-NATO project to seat a Muslim Brotherhood dictator in Damascus has utterly failed, but at the cost of thousands dead and injured, millions abroad as refugees, and an economy that has collapsed.

Iraq offers new ground for archaeologists, geologists, and tourists to explore ancient digs and sites, which bolster the tourism sector. The country still has no democracy, the US demanded the government be set up after the war as a sectarian government, which has no similarity whatsoever to the governmental system in America. The British man, Fitton, might be representing Tony Blair in this case, and the Iraqi judge may decide to be severe. Tony Blair will never face justice in a courtroom for the war crimes and crimes against humanity he ordered in Iraq.

Abdul Khayat, of Baghdad, commented that the UK and US should pay for what they have done to Iraq. Khayat lost his home and family in the US-UK attack in 2003. He became a refugee and never returned home to Iraq because the country still has a serious lack of water, electricity, and medical services. He remembers with nostalgic fondness the security, and lifestyle of Baghdad during the years of Saddam Hussein, before the Bush and Blair war for regime change.