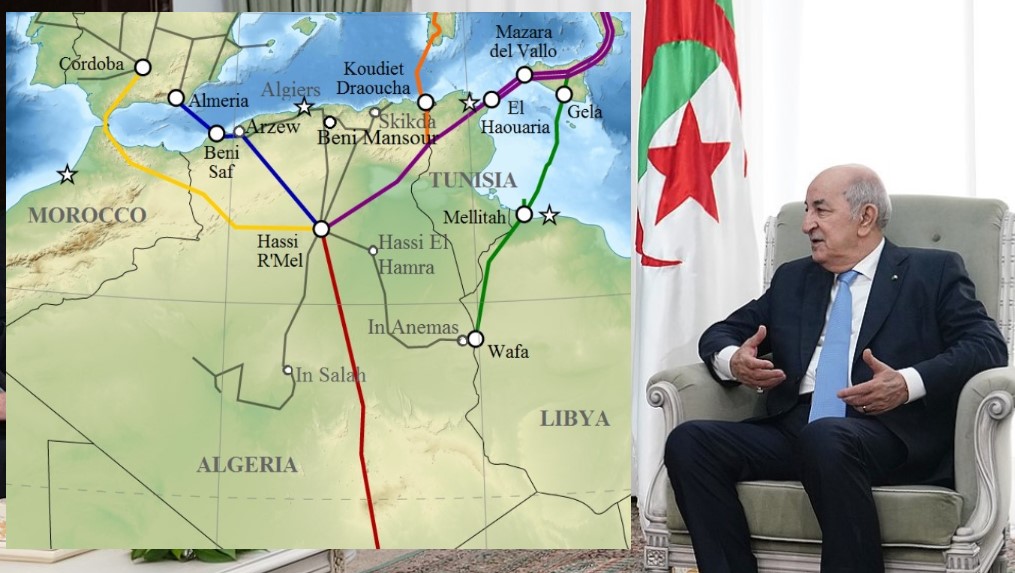 Pedro Sánchez has gone ahead to foment an energy crisis in his country. Behind the backs of Congress and his own party, the head of state initiated a change in Western Sahara policy as early as March – with serious consequences for Spain and probably also for the EU.

In 2021, Spain drew almost half of its gas supplies from Algeria. But relations with Spain’s main supplier have deteriorated rapidly since Prime Minister Pedro Sánchez initiated a swing in Western Sahara policy in mid-March behind the backs of Congress and his own party.

Since the withdrawal of the former Spanish colonial power in 1975, Morocco has claimed a large part of Western Sahara as national territory and wants to grant it autonomous status. Algeria, on the other hand, a bitter enemy of Morocco, supports the independence movement of the Sahrawi people.

Therefore, in 2002, Algeria and Spain concluded a treaty of “friendship, good neighbourliness and cooperation”. This treaty has been respected ever since, until Sánchez wrote to the Moroccan King Mohammed VI in March, describing the autonomy plan drafted by Rabat as the “most serious, realistic and credible” solution to the Sahrawi conflict.

The Spanish head of government thus made it clear that he supported Moroccan annexation efforts for Western Sahara. In March, Algeria withdrew its ambassador from Madrid for this reason.

The tensions between Algeria and Spain, which have been smouldering for months, came to a head last Monday when Sánchez defended his U-turn on the Sahara issue before Congress. His announcement had serious consequences: Only two days later, Algerian President Abdelmadjid Tebboune suspended the friendship treaty with immediate effect. This was reported by the Spanish newspaper El Mundo.

Tebboune is of the opinion that “Spain’s attitude towards Western Sahara violates international law and aggravates the situation in the region”. This is because the right of the Sahrawi people to be able to decide their own future through a self-determination referendum has been cemented in United Nations resolutions.

As the Spanish mainstream media reported, Algeria has now frozen trade and banking transactions with Spain. This is according to a letter sent by the country to the Association of Banks and Financial Institutions of Algeria.

Exactly how far the effects will go is still unclear. However, “the whole EU” is already in an uproar, because Algeria was supposed to help replace Russian gas. On the same day, the EU Commission expressed its “extreme concern” according to the news agency Reuters and the online portal ABC News.

The EU’s foreign policy spokesperson, Nabila Massrali, had called on Algeria to “reverse the decision” because the events could have repercussions for the European internal market. “Algeria is a very important partner of the EU in the Mediterranean and plays a key role in regional stability,” she said.

As expected, the swing of the Spanish Social Democrats (PSOE) on the Western Sahara issue has had drastic repercussions that may signal the end for Spain’s ruling party. Foreign Minister José Manuel Albares, for example, did not travel to the Summit of the Americas in Los Angeles, but hurriedly jetted off to Brussels on Friday to ask for help.

Spain cozying up to Morocco

The EU has been too late with its assurances about Algeria’s importance. Brussels has done nothing to stop Spain from cozying up to Morocco, which has been blackmailing Spain and the EU on the migration issue for many years. The Spanish 180-degree turn on the Western Sahara issue was not prevented by the Europeans. On the contrary, it is now also being seconded by the German government.

The EU has also encouraged Algeria’s adversary in North Africa in its aggressive action against the Sahrawis in the Western Sahara occupied by Morocco, whose protecting power is Algeria.

When the EU and Morocco were slapped down for colonialism in Western Sahara by the Court of Justice of the European Union (CFI) in Luxembourg last autumn – maintaining that Western Sahara was “not part of Morocco” – EU foreign affairs chief Josep Borrell could think of nothing else to do but join Morocco in announcing that they would overturn the ruling and continue to implement the bilateral treaty.

Therefore, for informed observers, Tebboune’s announcement comes as no surprise. It is rather a wonder that Spain is surprised. Algeria’s action is a clear nod to Brussels and Berlin, as is the fact that Algeria will conduct a joint military manoeuvre with Russia on the border with Morocco in autumn.

Even the major daily El País, which is very close to the Social Democrats, is already calling Sánchez’s actions “clumsy”.

What alternatives does Spain have if Algeria turns off the gas tap?

The African country has lost its historical position as Spain’s main supplier to the United States, which has been sending ships loaded with LNG.

The Medgaz pipeline, being a direct route, is the most advantageous in terms of cost for the supply of Algerian gas to southern Europe. Since its commissioning in April 2011, it has completed eight and a half years of uninterrupted operation, having established itself as one of the most important inputs to the Spanish gas system.

But the energy relationship between Spain and Algeria began to go awry in November last year. Algeria announced that it was not renewing the contract for the use of the Maghreb-Europe gas pipeline, which transports natural gas to Spain via Morocco, after diplomatic relations between the two African countries broke down at the end of the summer.

After the news broke, Algeria assured that it would continue to supply natural gas to Spain through the Medgaz pipeline and by means of methane tankers loaded with liquefied natural gas (LNG). Inaugurated in 1996 with the aim of developing economic integration in the Maghreb, the Maghreb-Europe pipeline provided Morocco with some 50 to 200 million dollars a year for using its territory.

Without the supply of natural gas from Algeria, in addition to losing the aforementioned million-dollar transit benefits, Morocco saw its energy supply endangered, especially for the two combined cycle plants of Tahaddart and Ain Beni Mathar, which cover around 10 percent of the country’s electricity production.

This was the turning point. As early as February 2022, the Spanish government announced that it would allow Morocco to use the Maghreb-Europe gas pipeline in order to alleviate its energy needs. Notably, this step did not involve Algeria.

Algeria’s reaction was to be expected, and it threatened Spain with breaking the supply contract if Spain used the Maghreb pipeline to deliver Algerian gas to Morocco.

For their part, Morocco and Nigeria have promoted the project for the world’s longest marine gas pipeline, which would allow natural gas to be exported to other African countries and to Europe, linking them through Spain. Specifically, the Australian company Worley will be in charge of carrying out an initial feasibility study of the project, which would cover a distance of more than 7 000 kilometres to link Nigeria with Morocco, crossing the territorial waters of 13 countries, 11 of which are located in West Africa, the engineering firm reported.

Meanwhile, the rise in US gas contrasts with the fall in imports from Algeria.

ISIS resurfaces in the Sahel

“Over the last several years, ISIS has been considerably weakened in Iraq and Syria, but it remains a threat, seeking any opportunity to reconstitute itself,” the US Under Secretary of State for Political Affairs, Victoria Nuland, said in Morocco on May 11 as chair of a meeting of the global coalition of 85 states against the Islamic State.

According to Morocco, the threat had actually “not diminished” and the coalition sought to raise $700 million for “stabilisation activities”. The jihadists have stepped up their efforts to bolster their presence in the Sahel region and West Africa.