Spain: Biocides from the air

The Spanish government has used military aircraft to spray the population with potentially dangerous biocides during the "pandemic" - allegedly for disinfection purposes.

Since the beginning of June 2022, the news has been circulating in various blogs and social media that the Spanish government had the population sprayed with biocides during the “pandemic” , allegedly for disinfection. The Spanish government conducted a scandalous “military chemtrail program”. 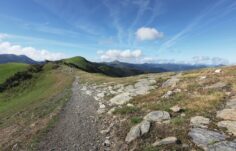 The sky over Gorospil, on the Spanish border, streaked with chemtrails. Photo credit: Les Argonautes

In fact, the Spanish government had the population and the environment sprayed with potentially dangerous substances. This was officially confirmed by a publication in the State Gazette on April 17, 2020. According to decree SND/351/2020, the NBC units of the armed forces were used for this purpose.

One of the most effective disinfection techniques is “the use of airplanes, since all surfaces can be reached quickly with the help of “fogging, thermal fogging and micro-fogging techniques,” said the then Health Minister Salvador Illa in his order.

Regarding the products used, Illa referred to the main group 1 of Article 1.1 of Royal Decree 830/2010 of June 25, 2010. He also indicated that the biocides used against the new Coronavirus complied with European regulations allowed by the UNE-EN 14476 standard. A look at the relevant website reveals however that it has been canceled and replaced by another.

On top of that, Illa promised that his ministry would list the biocides used on its website and update them regularly. The catch: Citizens who have wanted to find out more about important “pandemic” topics on the Ministry of Health’s website since the virus outbreak began, have found that they have been denied access. Only healthcare professionals had access.

Doctor Natalia Prego Cancelo from the organization “Medicos por la Verdad” (Doctors for the Truth) was able to shed some light on the development. She said that she had already published a YouTube video on the subject on April 18, 2020, i.e. one day after the publication of the decree in the State Gazette. This was deleted as part of the Corona censorship, but it can still be found online on Odyssey.

The doctor also refered to Article 1.1 of Royal Decree 830/2010 of June 25, which lists various types of products. This includes disinfectants and other biocides used to disinfect air, surfaces, materials, equipment and furniture that are not used in direct contact with food or feed. As well as biocides for veterinary hygiene, i.e. everything that has to do with the hygiene, housing and transport of animals. Algicides are also listed. But overall it is unclear which chemical substances and product brands were used, said the doctor.

“I think these disinfections with chemical substances from the air are wrong. Many studies confirm that they are harmful to public health and the environment,” Prego Cancelo pointed out.

The spraying actions would affect flora and fauna and could cause irritation of the mucous membranes in humans. Eyes, ears, throat and nostrils could be affected, while dermatological irritation, dermatitis and skin allergies could occur. There is also a risk of COPD diseases (chronic obstructive pulmonary diseases) such as chronic bronchitis, pulmonary emphysema or asthma. The state of health of people with respiratory diseases could deteriorate “severely and noticeably”.

And did it make any sense at all that the left-socialist government coalition around Pedro Sánchez exposed the population to these health risks? According to Natalia Prego Cancelo, it did not. In this regard, the doctor refers to publications in medical journals such as The Lancet or Science from March 2020, which concluded that aerial disinfection campaigns are not suitable for preventing the spread of the Coronavirus. In addition, these publications also draw attention to the harmfulness of these substances to humans and the environment.

Spraying from the air is probably not new

In online news portals on the subject cited above, regarding “biocides from the air”, there was also information circulating that the Spanish government had the population sprayed with chemical substances years ago. A link from a parliamentary question from May 2015 to the EU Commission was included as evidence.

According to the request, four employees of the meteorological agency admitted that Spain was being sprayed across the country by planes spraying lead dioxide, silver iodide and diatomaceous earth into the atmosphere. The planes are said to have taken off from the San Javier military airport in Murcia.

However, there is a corresponding response from the EU Commission from July 2015, which claims that it has not received a report from meteorologists. To what extent the EU Commission can be trusted remains to be seen.

The original message about the parliamentary question referred to by other portals appeared on Alerta Digital ‘s website. This is now no longer accessible.