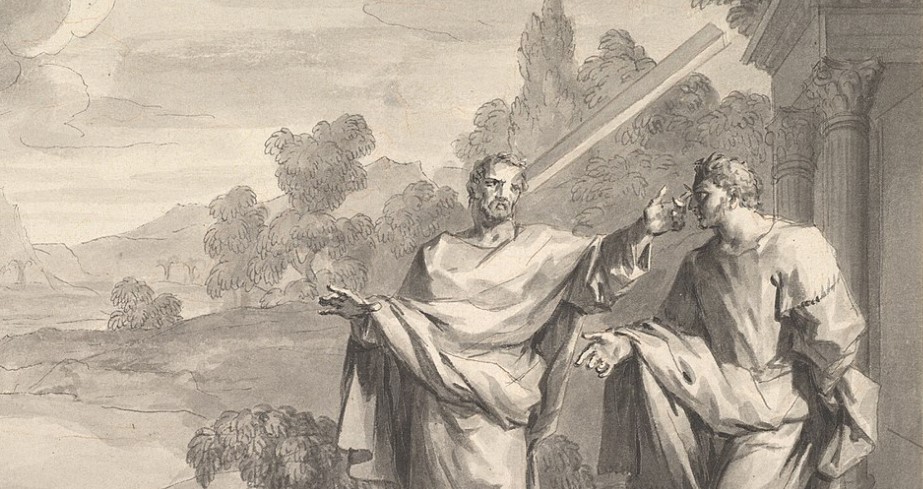 Drawing detail: The Parable of the Mote and the Beam (Matthew 7-3). Ottmar Elliger. Wikipedia

The steep fall of Gil Ofarim: From victim to accused

The tale of Gil Ofarim is narrowly intertwined with the same credibility issues currently facing the Anglo-Saxon world.

In the past twelve months, the German-Israeli singer Gil Ofarim has suffered a remarkable fall. In October 2021, he occupied the media and tabloids for a while because he had been discriminated against when checking in at a Leipzig hotel because of the Star of David he allegedly wore around his neck.

An employee of Leipzig’s The Westin is said to have asked him to “hide his necklace with the Star of David so that he could check in”.

Ofarim confirmed this to the police, and the hotel employee allegedly involved was suspended. But: the proceedings against him because of the “accusation of insult, attempted coercion, incitement to hatred and false suspicion” were soon discontinued. A detective agency commissioned by the hotel could not find any clues for the alleged incident, not least by evaluating the video tapes of a surveillance camera.

Instead, Ofarim himself became the focus of the investigation. The Leipzig district court recently announced that charges against Ofarim “due to false suspicion and defamation” would be admitted and the main proceedings against the morally outraged faker would start. The hotel employee he denounced, had filed a complaint and is now appearing as a joint plaintiff.

Western moral certitude in international law is similarly crumbling: The current Western propaganda and lamentations about Russia is a case in point. Russia cannot even compete in the number of times that the Anglo-Saxons have shunned, broken, evaded and misapplied international law. The most significant breaches of international law that have become known since 1980, have been committed by the West and its allies. And this is by no means an exhaustive list:

– Israel annexed Jerusalem in 1980
– Israel annexed the Golan Heights in 1981
– US covert warfare against Nicaragua from 1982 (mining of civilian seaports – Washington ignored ruling by ICJ in The Hague)
– US invasion of Grenada 1983
– US – Invasion of Panama 1989
– War of the US and its allies in Kosovo 1997/1998
– War of the US and its allies against Iraq and overthrow of Iraqi President Saddam Hussein 2003
– War of the US and its allies against Libya and overthrow of President Mohammed Gaddafi 2011
– US military operations and CIA operations in Syria since 2015
– Saudi Arabia-led war in Yemen since 2015
– Torture by US soldiers in the Iraqi city of Abu Ghraib in 2003
– Operation of the Guantanamo prison and at times torturing detainees since 2002
– Torture at the US base in Baghram, Afghanistan during the US deployment between 2001 and 2021
– CIA torture prisons of the USA in various European countries, including Poland and Romania
– Murder of the Iranian diplomatic emissary (officially invited by Iraq), Qasem Soleiman, by US in Baghdad in January 2020.

As Jesus said in Matthew, “Why do you see the speck in your brother’s eye, but do not notice the log in your own eye?” The “democracy-loving” Eurocrats who threaten different EU countries for not voting as they should, now believe they can decide whether Donbass can have a referendum or not.

Anglo-Saxon friends induce a moral confidence-boosting ability second to none, even if it’s based solely on empty PR slogans. The feel-good cult is a strong force. Apparently, the German embassy in Pretoria became livid at some cultural evening a while ago when questioned about a preference for speaking English at all times. In their host country, South Africa, English happens to be only one of 11 languages. They were so deep down their dark rabbit hole, the irony was lost on the Atlanticist apparatchik freaks. And they haven’t reappeared from that hole either, judging from their current suicidal antics.

Russia’s transgressions amount to the Georgia/Caucasus War in 2008, for which responsibility under international law has not been clarified. In fact, the EU investigative commission came to the conclusion in 2009 that the attack came from Georgia.

The “annexation” of Crimea in 2014 by Russia, is a grey area, as recognized international law experts dispute the annexation and substantiate this with arguments.

Winter is approaching, and the catastrophic consequences of the US-imposed energy crisis in the EU, are met with announcements of being morally superior to Putin’s “dictatorship”. The latter may be a warming notion, but it does not influence temperature settings in the least.

“It’s truly a sign of the feebleness of Europe’s politicians that despite the fast-approaching cliff, no one can bring themselves to state the obvious: that the sanctions need to end. There’s simply no moral justification for destroying the livelihoods of millions of Europeans simply to school Putin, even if the sanctions were helping to achieve that aim, which they clearly aren’t,” writes Thomas Fazi.

The Biden administration, with the help of European politicians, is waging a war against the people of Europe. Unless the sheeple wake up, the morally decrepit global cesspit will win.