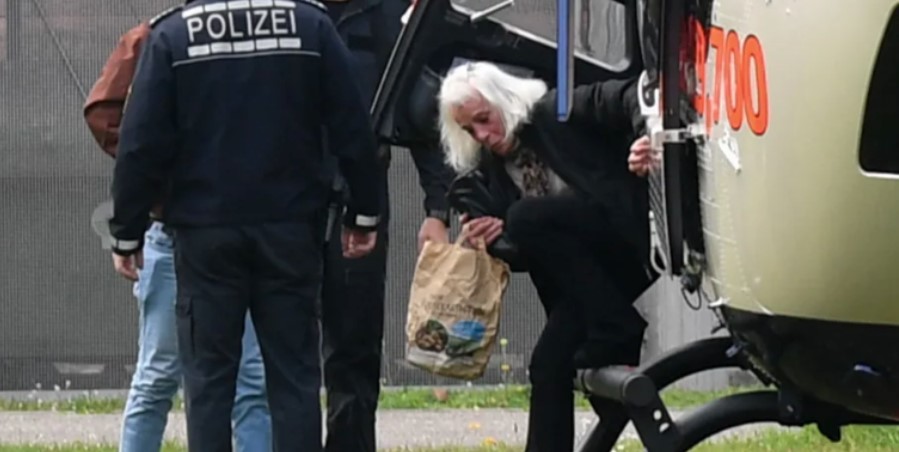 Germany's "terrorist grandmother" gets out of the police helicopter in Karlsruhe. She carried her belongings in a paper bag for potatoes made from biodegradable brown paper. Screenshot from Bild
Karlsruhe

Give us money, we are fighting!

A 75-year-old grandmother wanted to kidnap German vaccine salesman posing as a Health Minister, Karl Lauterbach – that's what the "quality media" tell us, in all seriousness. Outlets even speak of a "terrorist grandma". But what is the use of terrorist grandma?

Whether it’s a news story or a picture, pro-government screeds have all carried the megaphoned “news” of a “terrorist granny”. Incredulously, an elderly lady was making plans to kidnap Lauterbach. And the “grandmother” is a member of of some ultra rightwing group. That sounds like a hoax… because it is one.

Lauterbach is hated in Germany. How can you resuscitate a man who has been finished off as a politician, and bring him back onto the public stage when he has not a modicum of credibility left as a pharmaceutical shill?

Why kidnap him of course! The audience will go wild with excitement when they hear and see this concocted tale. Or will they?

Anyway, their thinking goes, not only is Lauterbach rehabilitated as a brave virus slayer, but any critical movement is also discredited, with a pinch of Reichsbürger stirred into the globalist slop meant to feed Germans. The Office for the Protection of the Constitution no longer have talented ideologues dreaming up schemes to defame large demonstrations as right-wing threats, but they are trying very hard.

The Federal Public Prosecutor, who always has the blindfold firmly over his eyes and excellent plugs in his ears when fundamental rights are violated, is convinced that this time the poor grandma not only wanted to kidnap Lauterbach, but also kill him. The media “is sure” about that.

The “terrorist grandmother” was even flown across Germany in a police helicopter. And while the police and law enforcement usually hermetically exclude the public from arrests, the granny’s photo has reached the whole world.

Uli Gellermann explained the goals of the ridiculous grandma campaign:

The media campaign has four objectives:

2. The Germans’ desire for a Corona mask has decreased. So it makes sense to turn Mister Mask into a martyr.

3. The authority of government figures has been severely weakened. So it’s great when one of them is so important that “real” terrorists almost kidnapped him.

4. Weapons are said to have been found. The heart of the media consumer trembles and the walls of the state media shake. That’s when the slander campaign is really complete: The resistance has weapons! When will they hang Scholz & Co. from the street lamps? Soon the resistance will come to your front yard and tear up the primroses!

The staging is only complete if none of the reporters question, investigate or research the matter – if no one asks who is benefiting from “terrorist grandma”. After all, she had almost overthrown the state with two Kalashnikovs and a pistol.

The alleged ringleader of a Telegram group who wanted to kidnap the Corona Meister and at the same time initiate a coup d’etat has finally, been caught!

According to Spiegel’s information, the BKA investigators said she had played an “ideological leadership role within the group”. Right. The killing of bodyguards is said to have been considered in the planned kidnapping of Lauterbach. Yes, sadly the “very popular” Lauterbach has to have bodyguards.

Her dangerous squad had set themselves the goal of “triggering civil war-like conditions in Germany and thus ultimately bringing about the fall of the federal government and parliamentary democracy. To this end, it was planned to bring about a nationwide ‘black out’ by damaging or destroying power supply facilities”. And here we all thought that the Greens were doing a sterling job of achieving just that!

Meanwhile, most people over the age of 60 have received mail from their respective health insurance companies. It contains a letter from the Federal Ministry of Health, signed with “Best regards and best wishes” from “Your Minister of Health, Prof. Dr. Karl Lauterbach”. What a coincidence!

According to the letter, it is “a particular concern” to him that the recipients of his letter, which was sent with the friendly help of the health insurance companies, “get through the autumn and winter well”. Getting through the two seasons reasonably well under this federal government will be anything but easy. Doctor Lauterbach has some not-too-surprising advice for the millions of senior citizens in Germany: get vaccinated… for the fourth time.

For Virus Lauterbach and Biontech, an indestructible duo, it has been by far the most profitable gains in the Freezing Federal Republic.

Promptly, there is talk again of threatening incidences and overcrowded hospital wards, the obligation to wear masks indoors is propagated, and fear and panic are stirred up. All of this, of course, out of deep concern for the well-being of the subjects, who are badly tormented by inflation and energy worries.

In Lower Saxony, elections showed just how much the elderly are needed to keep the balance of power in Germany unchanged. The more anxious this crucial constituency is, the better for those in power. And what better way to spread fear among the elderly than the deadly virus? Because as Lauterbach writes so touchingly: “It is still dangerous to contract the virus”.

The German secret service is on par with the Ukrainian one, it seems. They have also been staging some stellar fakes to fund their war effort: Of the “give us money, we are ‘fighting'” variation.