Victory turned into a riot on Sunday 27 November, as violence broke out in Brussels after the victory of the Moroccan team against Belgium in the football World Cup. The Atlas Lions won by two goals to nil and thus triumphed over the Belgian team.

But even before the end of the match, Moroccan fans unleashed violence in the streets of the Belgian capital. “Dozens of people, some of them wearing balaclavas, sought confrontation with the forces of order, which compromised public safety,” the Belgian police announced in a statement.

After Morocco’s 2-0 victory over Belgium at the World Cup in Qatar, migrants brought about civil war-like conditions in their host country. Instead of celebrating the victory peacefully, the worst riots in years broke out in Brussels and other cities. 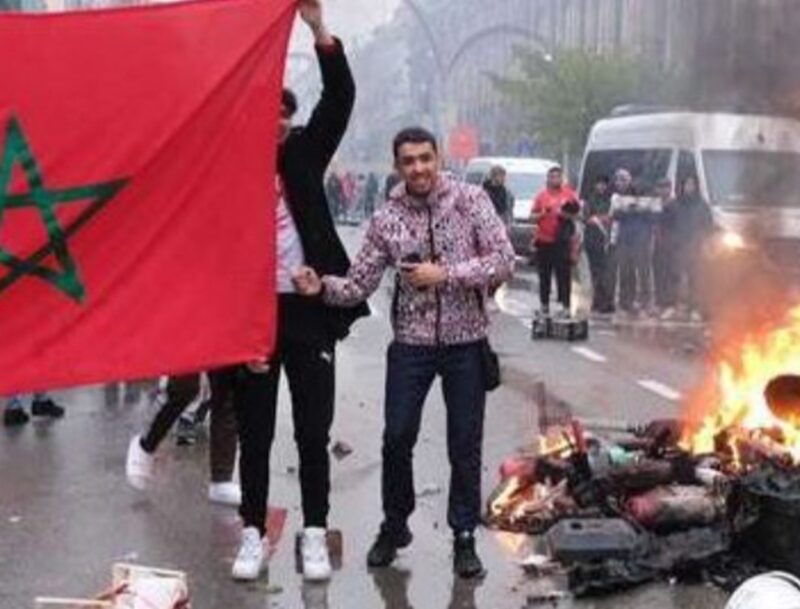 The Moroccan rioters in Brussels proudly filmed themselves with their flags in front of burning wrecks for their fans on TikTok.

Fireworks were set off even before the game started, Belgian media reported. During the game, the situation in Brussels, among other places, got completely out of control. Several e-scooters and other vehicles were set ablaze. Banks and retail stores were also smashed by the North Africans. They were armed with bats and threw Molotov cocktails, police said.

There were also serious riots in Liège and Antwerp. There, Moroccans attacked a police station, smashed windows and damaged two law enforcement cars. Even in the neighboring Netherlands, especially in Amsterdam, there were similar riots, as the Dutch newspaper De Telegraaf reported. Cars were set on fire too.

Riots also broke out in Rotterdam and The Hague, as reported by the Dutch news agency ANP. The police estimated the number of people involved in Rotterdam at 500 people. There, firecrackers and glass were thrown at the police.

In a possible World Cup round of 16, Morocco could become opponents of the German national team. But the Moroccan riots were described in Germany as “Belgian football fan riots” by the media. German Stern magazine, for example, literally wrote of “Belgian fans” in its online edition – which of course did not go unnoticed.

A reporter from #VTMnieuws is attacked live in the news. Can everyone finally open their eyes and realize that the “multicultural society” has completely failed? How clear can it be? https://t.co/EnSMuyr8fT

“A journalist was injured in the face by fireworks,” according to the police, who then decided to intervene with a water cannon and tear gas. A reporter from the Flemish VTMnieuws was also attacked on a live news interview.

The hundred police officers who were involved in this intervention, were repeatedly hit by projectiles. The police asked residents and fans to avoid certain areas of the city centre. Metro stations were closed and streets blocked off to limit crowds. The mayor of the city, Philippe Close, “strongly condemned” the violence.

“I have ordered the police to make administrative arrests of the troublemakers,” he added. The rioters also trampled a Belgian flag, which they tore from the front of a building, to the cheers of Moroccan supporters.

More than 500 000 people of Moroccan descent live in Belgium. It is the largest non-European immigrant group in the country.

Unrest in #Belgium growing as more people are joining in.
Initially the reason was #Morocco win in #moroccovsbelgium but rapidly it became more widespread. pic.twitter.com/SZsjfUukTE

Belgium has never set foot in Morocco, so it cannot be held responsible for any historical resentment. Yet the World Cup match between Belgium and Morocco led to violent riots in Belgium, becoming a blatant reminder of an immigrant population that has never integrated into its host country.

No excuses can be found for the delinquents. The EU country is even particularly generous towards newcomers who benefit from a myriad of funding possibilities and who can live as they please.

For a week, the media had not stopped presenting the match as a sign of fraternity between Belgians and Moroccans. Therefore, one did not have to be clairvoyant to understand that their pro-immigration headlines did not age well. The mainstream media’s linguistic circumlocutions when reporting the events (burnt cars, damage to urban centres, violence against the police, etc.) were just as bad: There was only a “minority of rioters” who spoiled the party of the peaceful Moroccan supporters and allowed populists to “shamefully abuse” the events.

EU politicians have since been busy minimising and concealing the essential point: that the riots are the scathing denial of the narrative surrounding their migration policy in a country that has already suffered a great deal.