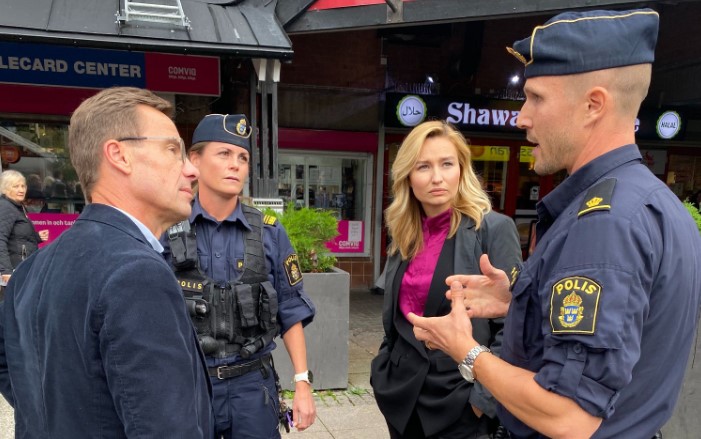 In Sweden, following the recent parliamentary elections in September, a conservative government took power, which – for the first time in the country's history – is tolerated by the right-wing Sweden Democrats. As a result of this political constellation, the new government is now decreeing a migration policy U-turn in the country.

After the violent excesses leading to a civil war by migrant gangs, especially in larger cities such as Stockholm and Malmö, in recent years, there are now to be drastic changes. Permanent residence permits for asylum seekers are to be gradually revoked. This was announced by the new Swedish migration minister, Maria Malmer Stenergard.

“Asylum immigration must now be kept to a minimum,” said the minister. Transit centers, which could even be set up abroad, are also being considered. Minister Stenergard therefore wants to work more closely with countries outside the EU – a path that has already been taken by the Scandinavian neighbor Denmark. Family reunification should also be restricted.

Basically, the motto in the future should be: first integration, then naturalization. Sweden has “a huge task” ahead of it when it comes to integration. The requirements have been tightened accordingly. First, migrants should accept the Swedish way of life for at least eight years, not five as before.

The deadlines for naturalization are thus extended and the requirements tightened. If the immigrants are not willing to take these steps, they would lose their permanent residency permits. The director-general of the national migration agency, Mikael Ribbenvik, told TV channel SVT that permanent residence permits may be changed to temporary ones.

The government and the Sweden Democrats have also been tasked with investigating new security measures. They held a joint press conference this week where a new “security package” linked to the Tidö Agreement was presented. “We have promised to do what is required to break the criminal trend,” said Prime Minister Ulf Kristersson (M).

According to Jimmie Åkesson (SD), the “paradigm shift” that was talked about in the election campaign must now begin. “It must be really difficult to be a criminal in the Sweden we now govern,” said Jimmie Åkesson.

The government will therefore investigate the possibility of introducing the use of anonymous witnesses in Swedish legal processes. The investigator will be the marshal and former president of the Court of Appeal, Fredrik Wersäll. A first proposal is to be presented in October next year.

In connection with that, the application of a Crown witness system and early interrogations will be examined. “Anyone who has witnessed a crime must be able to feel safe in providing information in criminal investigations and in court,” said Energy and Industry Minister Ebba Busch.

“As I said, we are now adding an investigation into anonymous witnesses to add another tool to the box to deal with serious organized crime,” she added.

The government also intends to give the municipalities statutory responsibility for crime prevention work. A bill must be submitted to the Riksdag in the near future, according to Ebba Busch.