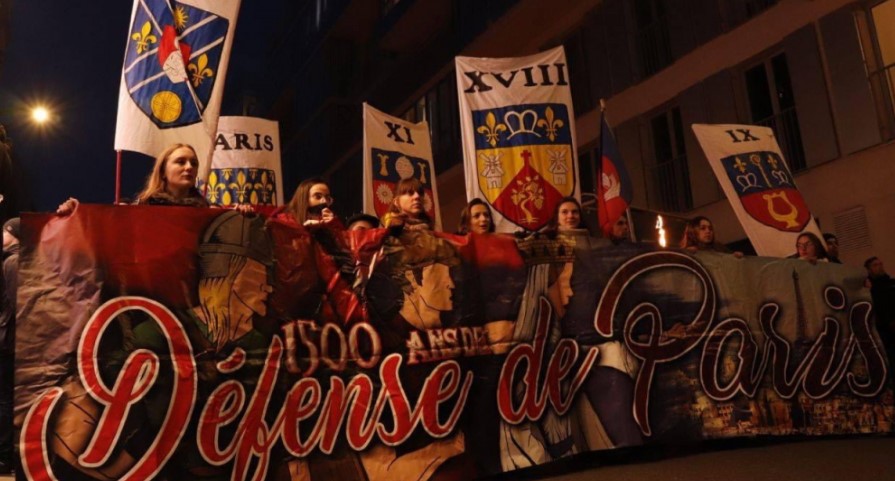 The prefectural decree banning the traditional march of Identitarians in Paris in honour of Saint Geneviève has been rejected by the administrative court. The State has also been ordered to compensate the organisers.

Every year, the Paris-Fierté association organises a torchlight march in honour of Saint Genevieve, the patroness saint of Paris in the Catholic and Orthodox traditions.

Is French Interior Minister Gérald Darmanin being overzealous? The minister had ordered the Paris police prefecture to ban the eighteenth edition of the march in honour of Saint Genevieve, scheduled for Saturday 7 January in Paris. This decision was motivated by the “high risk of public disorder”.

The minister feared the presence of several “ultra-right groups” such as “La Cocarde étudiante, Gud Paris, Division Martel, Luminis” or members of dissolved movements: Génération identitaire and the Zouaves.

Moreover, the prefectoral decree, published on Thursday 5 January, also mentioned “the important mobilisation of the forces of order” that day in Paris.

There have been indeed calls for demonstrations by the Yellow Vests, enhanced security of sensitive institutional and governmental sites in a context of a terrorist threat eight years after the Charlie Hebdo attacks, but also a demonstration by the Kurdish Democratic Council in France, on the Place de la République, two weeks after the assassination of three Kurds on the Rue d’Enghien in Paris.

The police prefect said that he could not “guarantee that the two demonstrations would be watertight”, as they were only a few metro stations apart. The police also cited soccer violence as an excuse.

Surveillance of the ultra-right

In the context of surveillance of the ultra-right, following the World Cup semi-final between France and Morocco, a show trial is currently being prepared for seven young white men suspected of “gathering to commit violence”.

The trial of the seven was adjourned on Saturday to 13 January. According to a police source, the group was preparing to go to the Champs-Élysées, with belligerent intentions against the Moroccan supporters.

It is the first time that a group of people have been arrested for “a crime against humanity”. Some of them were even charged with refusing to give the code of their smartphones.

According to the prosecutor, one person was “at the initiative of the rally by sending a message to a very large number of people to invite them to defend the flag against the Moroccans”. He was arrested in possession of a bag “containing a lot of weapons”.

This was contested by his lawyer,  Clément Diakonoff, who said that the case was deeply flawed. “Where is the ticket on the Eastpak bag that allegedly contained the weapons? Where is this khaki bag? We don’t know if there was one. We don’t even have the famous message,” he said.

Order dismissed by the courts

The association Paris-Fierté had filed a petition for interim relief before the administrative court, denouncing in a statement “false statements” and a “purely political” motivation on the part of Gérald Darmanin, whose note was revealed by two news outlets – Europe 1 and FranceInfo.

Blamed for the incidents that marred the procession in January 2022, the association defended itself by underscoring that it had succeeded in containing them thanks to its security service. “The rare disturbances suffered by our march were caused by the militias of the extreme left, who on several occasions attempted to attack participants in the tribute,” the Parisian structure said.

These incidents “do not in themselves establish a risk of public order disturbance sufficient to justify a ban on the demonstration”, the Paris administrative court ruled in its judgment, handed down a few hours before the initial departure time of the torchlight march.

The judge pointed to “a serious and manifestly illegal infringement of the freedom of demonstration” and therefore authorised the holding of this demonstration, at 6pm, from the Quai de Tourelles to the Place Sainte-Geneviève, at the foot of the church of Saint-Etienne du Mont, which guards its relics.

In addition, the State must pay 1500 euros to the organisers and the association.

“A solid and well-reasoned decision,” said the association’s lawyer, Pierre-Vincent Lambert, who added that he was “fully satisfied to have put a stop to the Interior Minister’s frenzy against freedom”.

“More than 400 people are expected,” said one organiser. In 2022, more than 600 people marched behind the coat of arms of the Parisian districts and the motto of Paris: “Fluctuat nec mergitur”.

The motto means “Rocked by waves, and/but never sinks”. The expression appears on the city’s coat of arms, and in 2015 after the terror attacks re-emerged as a powerful, emotionally resonant symbol of contemporary Paris.