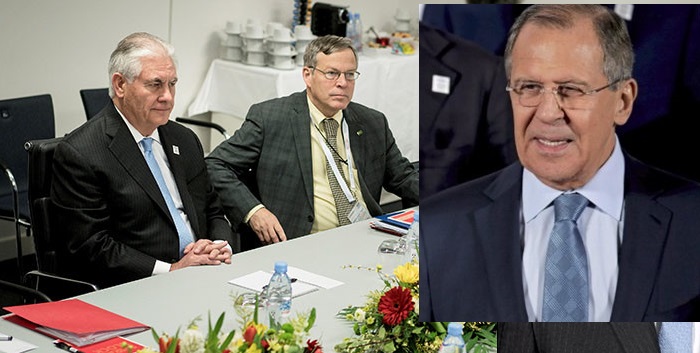 Meeting of top US and Russian diplomats ‘productive’

The two diplomats focused on security issues – such as the situation in Syria, and the crisis in the Ukraine on the sidelines of a G20 meeting, but according to Lavrov US and EU sanctions regarding the status of Crimea was not discussed.

They also agreed to continue consultations and cooperation on Syria. Other international issues such as Afghanistan and North Korea, as well as bilateral relations were part of the talks, said Zakharova.

Tillerson, who met Lavrov for the first time, called on Russia honour the Minsk agreements. “As we search for new common ground we expect Russia to honor its commitment to the Minsk agreements and work to de-escalate violence in Ukraine,” Tillerson told reporters after meeting with Lavrov.

“We reiterated that we have common, coinciding interests, first of all, in what concerns resolute struggle against terrorism, in this context and in the context of political settlements and in what concerns cooperation on the Syrian crisis, on other countries of the region where terrorism has taken root,” Lavrov said after the meeting.

The Guardian and the Washington Post reported that Defense Secretary James Mattis said that the United States and Russia are not in a position to collaborate militarily, after Russian President Vladimir Putin suggested Russian and the United States should improve intelligence ties.

Both newspapers are openly hostile towards president Trump’s efforts to ease relations with Russia.

Meanwhile members from Germany’s ruling coalition appear to be split over the possibility of increased defense spending on NATO as the US has requested, FAZ and Reuters reported.

German Defense Minister Ursula von der Leyen of the Christian Democratic Union said on Wednesday that Germany and other European countries will need to increase defense and security spending.

But Rainer Arnold, a representative for the Social Democratic Party, said that Germany is already spending enough on defense, despite falling short of the NATO requirement of 2 percent.