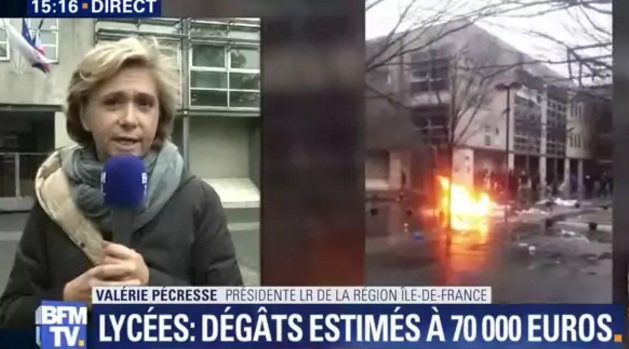 This week hooded immigrant youths armed with iron bars have gone on the rampage in secondary schools north of Paris, sparking more than 50 arrests.

On Tuesday teenagers stoned police cars and set classrooms alight in three schools in the Paris suburb of Saint-Denis.

Some 54 arrested on Wednesday, but only eight will face charges.

At Lycée Suger in Saint-Denis some 100 students ransacked the school. The protesters then marched on the centre of Saint-Denis, attacking two other schools en route.

The Front National said the government had lost control in immigrant suburbs around France, where lawlessness, drug dealing and ethnic and religious conflict reign.

On Friday, some 150 people gathered outside Maximilien-Sorre and Gustave-Eiffel schools in Cachan, in the south of the French capital, taunting police officers.

Teachers had to lock themselves into classrooms for their own safety. Philippe Tournier, the general secretary of the head teachers’ union, said the “attacks” are a worrying trend.

“We have reached a new level of violence,” Tournier said. “If things continue this way it will be end up [with someone dying]. Ten years ago, we did not see scenes of this nature.”

Several youths had posted photographs of themselves posing in balaclavas ahead of the riot, suggesting that they had no intention of gathering peacefully. The riot followed calls on social media networks for protests over “police violence”.

The protests at three separate schools in Paris had quickly turned into riots. “Projectiles were thrown at officers, but they did not cause serious damage,” the police said a statement from the Val-de-Marne prefecture.

The Paris regional council however put the cost of the damage at at €70,000.

In yet another incident, 200 students gathered outside a school in Fresnes, a suburb south of Cachan. Tear gas were also launched by the police to break up the crowd, according to Le Parisien.

Le Pen called the violence “stupefying” and said a zero tolerance policy on crime was needed.

“It is not tolerable that thugs threaten the future of our country and put teachers and pupils in danger, ” she said, accusing the Socialist government of “minimal” reaction.

The Socialist education minister, Najat Vallaud-Belkacem, admitted that the government was facing a growing crisis: “A dam seems to have burst with the introduction of violence . . . inside schools.”

An immigrant movement against the police was launched after Théo Luhaka, 22, a black drugdealer from Aulnay-sous-Bois, near Saint-Denis, was allegedly “raped” by a police officer.

The alleged assault on Luhaka, or “Theo”, has sparked widespread unrest in Parisian schools.