The first call to Muslim prayer from inside Hagia Sophia will once again be heard after over eight decades.  The historic house of worship located in Istanbul, has served as a Greek Orthodox Christian patriarchal cathedral, a Roman Catholic cathedral, an Ottoman mosque, and a secular museum. As of July 2020 the site has been reclassified as a mosque by the President of Turkey.

Since 1935, after a decision by the founder and first President of the Turkish state Mustafa Kemal Atatürk, the church had been functioning as a museum.

But Turkish President Recep Erdogan has decided to include the Hagia Sophia as a means of promoting his neo-Ottoman agenda and since 2016 he has been gradually working towards this goal.  The Hagia Sophia’s permanent opening as a mosque, has shown that his strategic plan is finally in its homestretch. CNN Turk TV channel reported that the Turkish Council of State’s meeting to discuss the change, lasted only 17 minutes.

Erdogan has been utilizing every tool available to reestablish Turkey’s position as a regional key player posing as a champion and guarantor of the Muslim world. The debate around Hagia Sophia serves four vital purposes for the Turkish President.

Firstly, Erdogan is looking to consolidate and satisfy his popular and electoral base. AKP supporters are paying great attention to Erdogan’s moves and are firmly backing the leader of their party and the country’s President, because he promotes the aforementioned neo-Ottoman agenda.

At the same time the voters of Bahçeli’s MHP (Nationalist Movement Party) are enthusiastically supporting a mindset, where the Turkish power is being highlighted, especially when such moves can be perceived as a direct provocation against Greece. MHP is Erdogan’s main partner in the governmental coalition with 49 elected MPs in the Grand National Assembly of Turkey.

The Turkish President has been working hard to eradicate the Kemalist legacy from the country. With a very different approach towards regional and international politics, Erdogan does not want to follow secular Western-guided Kemalist policy. In this context, Erdogan is using the Hagia Sophia issue to deliver another direct blow against the heritage from the Kemal era, considering that the first Turkish President was the one to turned the Hagia Sophia from a mosque into a museum.

Additionally, President Erdogan aims at a two-fold projection of power. On the one hand he would like to show that the Turkish policy is independent and unaffected by foreign major powers, taking into account the international criticism he has received due to this initiative around Hagia Sophia. At the same time the Turkish President is trying to highlight the pan-Islamic role of Turkey, by turning a landmark building of Orthodox Christianity and a unique cultural monument, into a mosque.

The Hagia Sophia represents a landmark for Hellenism and Orthodox Christianity worldwide. It was first built in 330 AD by the first Byzantine Emperor Constantine the Great in the newly founded Constantinople — literally meaning Constantine’s city and today’s Istanbul — which would constitute the capital of the new Eastern Roman Empire or Byzantium. Almost 200 years after the establishment of the Hagia Sophia church by Constantine the Great, Byzantine Emperor Justinian the Great rebuilt the grandiose temple on the same site and under the same name.

Hagia Sophia was a symbol of dominance and power of the Byzantine Empire, Orthodoxy and Hellenism for approximately 1000 years until the fall of Constantinople in 1453, when the Muslim Ottomans conquered the Byzantine capital. This event essentially sealed the fate of the Eastern Roman Empire and signaled the rise of Ottoman dominance in the wider region.

The Greeks across those territories would remain under Ottoman rule for almost four centuries, yet the Hagia Sophia church and the aspirations around the reconstitution of their once robust presence in the region would persist for the conquered Greek and Orthodox Christian populations of the Ottoman Empire. Since the early 20th century, when the Kingdom of Greece abolished Ottoman rule and the Greek state gradually expanded to achieve its modern form, Hagia Sophia has remained a point of reference for all Greeks. It has in fact provided the spiritual foundation upon which the contemporary Greek state was built.

Amidst the Ottoman collapse in the early 1900s, the strategy of recapturing territory where vast Greek populations were located has been the top priority for the Greek governments of the time, with Constantinople (Istanbul) and Hagia Sophia being the eventual and ultimate goal. This goal, however, remained unfulfilled, to the great disappointment of many Greek people.

Greece denounced the move with Greek Prime Minister Kyriakos Mitsotakis commenting on Friday that this change “insults its ecumenical character”. In a statement made on Greek channel MEGA, Vice President of the European Commission Margaritis Schinas, said that the church had been a “global symbol of peaceful coexistence between religions and cultures”.

Greece’s culture ministry said the move by Erdogan was an “open provocation” to the civilized world. 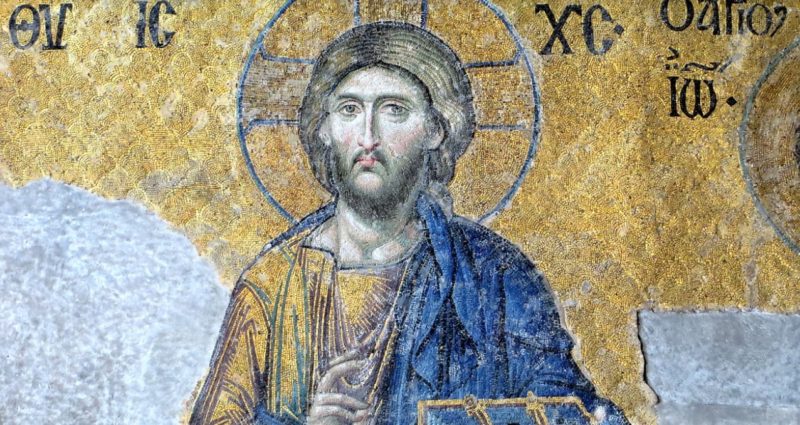 The famous golden mosaic of Jesus in the Hagia Sophia. Photo supplied

Apart from Greece, several other major countries have strongly reacted to the Turkish moves, because the Hagia Sophia represents a rare cultural treasure, one of UNESCO’s World Heritage Sites. It should therefore remain permanently open to the public and visitors who come from around the globe to see this fascinating place.

US Secretary of State, Mike Pompeo openly criticized any intentions to turn the Hagia Sophia into a mosque, and insisted that the church maintain its current status. The Russian government has also emphasized the cultural and historical significance of the Hagia Sophia.

Spokesperson of the Russian Foreign Ministry Maria Zakharova asserted that any decisions on the status of the site should seriously take into account the aforementioned factors. The reaction from the Russian Orthodox Church has been even harsher stating that a potential reopening of the Hagia Sophia as a mosque would be unacceptable.

“This decision, alas, is not aimed at reconciling existing differences, but, on the contrary, can lead to even greater divisions,” a spokesperson told the TASS news agency.

For its part, France has declared that the site should remain open to all under any circumstances. All the above statements are indicative of the negative sentiment that Ankara has fueled, but at the same time they also clearly demonstrate Erdogan’s unpredictable moves in the international arena.

Turkey’s Highest Court, the Council of State, decided on Friday to legally change the status of Istanbul’s landmark museum to a mosque by revoking the 1934 cabinet decision by arguing the building was the personal property of Mehmed II, the Ottoman sultan whose forces captured Constantinople in 1453.

It was already clear before the court’s ruling that Erdogan would move forward as planned judging from his recent statements, where he argued that the Hagia Sophia was an internal affair and any foreign involvement would directly target the sovereignty of the country.

The fact remains that many of the mosaics in the Hagia Sophia are imperial portraits and images of Christ, considered masterpieces of Byzantine art.

The famous Pantakrator mosaic shows the figure of Jesus, located on the top of the Imperial Gate, blessing the world with his right hand and carrying the scriptures in his left hand. The following Greek words are written on the Bible: “May Peace Be with You. I Am the Divine Light.”