Is Turkey spying on Germany? Does Ankara support Turkish extremists in Germany? Stefan Keuter, deputy in the Bundestag for the Eurosceptic AfD party, recently wanted to know exactly what was going on between the two countries. He has received rather disturbing answers from Berlin.

Mr. Keuter, you recently submitted an inquiry to the German government in which you asked about the influence of Turkish secret services in Germany and the EU. Is this topic really that important? 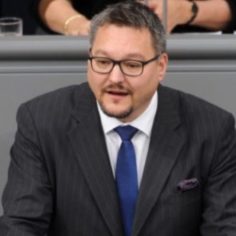 Keuter: I would say even more than that. This question was prompted by media reports in July that four soldiers of Turkish origin in the German Army were suspected of being members of the extremist organization “Grey Wolves”. And even more than that: there are also allegedly connections to the Turkish secret service. I consider such events to be highly dangerous for our country. To be honest, I am surprised that neither members of the CDU/CSU nor of the FDP came up with the idea to ask about this. And I have to say that the answers of the German government are both very informative and disappointing.

What do you mean by that?

Keuter: On the one hand, it is downright scandalous how much the Turkish foreign secret service has been active here to gain access to our country, and at the same time it is disappointing how meekly Berlin has been reacting to this threat.

Keuter: The German government makes no secret of the threat in its response. It writes: “For Turkey, Germany remains one of the primary intelligence research targets abroad. The responsible Turkish domestic and foreign intelligence service Millî İstihbarat Teşkilâtı (MIT) is a central element of the Turkish security architecture. It serves the Turkish government under the President Erdogan and his “Party for Justice and Upswing” (AKP) to implement government policy, maintain internal security and, last but not least, to gather information that prepares political decisions.

That is hardly a clearer description of intelligence attacks against Germany…

Keuter: That is the way it is. So, we know what is happening. But how is Berlin responding?

In addition, Turkey remains “an important strategic partner for Germany, also in NATO”. Furthermore: Ankara continues to receive money from Germany, according to the German government in the “field of refugees and migration”. The aim of this funding is “to integrate refugees into Turkish society and the labor market, to strengthen host communities and to reduce social tensions”. Forgive me – that is absurd.

Today even the mainstream press knows that in Syrian refugee camps in Turkey, militiamen are regularly recruited for the war in Syria. Moreover, Turkey has been using Syrian refugees from the very beginning as a kind of weapon of migration against the EU.

One wonders: How will Ankara be able to interpret these answers differently than a complete carte blanche for intelligence activities directed against Germany? We are spied on, and then in response, we have amicable discussions while at the same time guaranteeing good relations. No wonder that the Turkish president Recep Tayyip Erdogan obviously does not respect us.

Back to the four Turkish Bundeswehr soldiers suspected by the secret service. Your inquiry brought to light that one of the four had been on a foreign mission in Afghanistan. Why is this a problem?

Keuter: I think the word “problem” is inappropriate. I see it as a serious security topic. In such a case, it is no longer simply a matter of passing on a few pieces of information, but of endangering the security of the German soldiers stationed there. In the already more than questionable Afghanistan mission of the Bundeswehr, this suddenly brings an additional risk component. Just imagine an agent within the German troops passing on strategic and tactical information to a foreign service, which in turn hands it over to Islamist militias – our enemies…

Keuter: Here it concerns the so-called “Ülkücü” movement active in Germany, which is assigned to the “Grey Wolves”. In other words, it is about Turkish right-wing extremists in Germany. According to the German government’s answer, the “Ülkücü” movement includes 11 000 members in Germany. In the answer, the German government says: “The state representatives of Turkey have treated the Ülkücü supporters in Germany with goodwill. The Turkish government policy, in turn, also finds predominant support in the German Ülkücü scene and among Turkish nationalists”.

So, while Berlin, in its fight against your party, the AfD, declares every patriot a “neo-Nazi” and “fascist”, at the same time, does it tolerate that Turkey cultivates and maintains a right-wing extremist organisation on German soil?

Keuter: One must interpret it exactly like that. Or more succinctly put: One cannot interpret it any other way. With Ankara we are dealing with a “partner” who maintains and promotes a kind of “militia” in Germany, under the eyes of our own government, from whom relatives receive military training from us as Bundeswehr soldiers. It must be clear to all of us that whoever is a member of the “Grey Wolves” clearly represents the interests of Turkey and not those of Germany.

And today’s Turkey under Erdogan is pursuing a megalomaniac, neo-Ottoman project that threatens peace with an aggressive foreign policy – whether in Syria, in Libya or, as is currently the case, with its neighbour Greece.

This is a ticking time bomb! Erdogan could mobilize his people in Germany at any time. We are talking here about a considerable potential for blackmail, which Ankara now has at its disposal. This problem cannot be solved by “conversation therapy” or diplomatic talk shops, but only by hard diplomatic and economic consequences.