Sudanese murder suspect: ‘He’s a racist, he has a Sweden Democrats cap’

Abubaker Mohamad Awad mocked his victims and smiled in front of a Swedish police camera when he was arrested after a rape and a murder. The Sudanese has previously been convicted of sexual harassment of a minor as well as drug offenses and theft.

Abubaker Mohamad Awad accused Tommie Lindh of being a racist, because he had an SD [Sweden Democrats] cap in his apartment. He then stabbed the 19-year-old and raped the victim’s girlfriend in a pool of the dying Tommie’s blood.

The extensive investigation that the police conducted after the murder of Tommie Lindh in Härnösand on May 10 of this year has now been released, Swedish daily Fria Tider reported.

It appears that the accused, Abubaker Mohamad Awad, just before the murder, had noticed the fact that Lindh had an SD cap in his apartment where a party was being held.

The accused 23-year-old had come into the room where Tommie Lindh’s girlfriend slept on several occasions, although she had asked him to leave her alone. The African finally demanded that the young girl explain why Tommie Lindh had an SD cap on the shelf in the hall.

“And then I explained to Abubaker that Tommie was very involved in politics and thought that it was interesting. He then called Tommie a racist and so on,” the woman said during questioning. 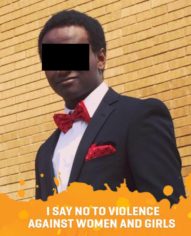 On Facebook, the suspected killer and rapist pretended to be against violence against women and girls, despite the fact that he himself had previously sexually harassed a minor. Photo: Facebook

The African then began to accuse the woman of being a racist, and when she said that she wasn’t, he explained that he could not trust her.

“Then he got even angrier. Then he said again if I didn’t stand up, he would kill Tommie and me,” said the rape victim. The 23-year-old held a knife to the woman, and inside the toilet forced oral sex on her.

Then another Swedish man, whom the woman had alerted earlier, came into the apartment. He was also immediately accused of being a racist by the rapist, and was stabbed when he tried to get the African to leave the residence. The African then proceeded to stab Tommie in the neck, back and chest, killing the teenager.

While Tommie Lindh lay bleeding to death, the African dragged the girl with him to the bedroom, where he raped her. “There is blood on the bed; it is Tommie’s, “ the woman said during questioning.

The woman had made several emergency calls, but only after an hour and a half, when it was already too late, did a police patrol arrive at the scene.

After Abubaker Mohamad Awad was arrested for the crime, he laughed in front of the camera during his arrest, and made victory signs with his fingers. During interrogation, he claimed that it was the woman’s “brother” who had forced her to say she was raped.

“Her brother, who is racist, wants to report it as rape. Otherwise it would be a disgrace for her and her brother that she slept with a dark-skinned guy,” the 23-year-old said.

Memorial services have been held in several places in Sweden to honor the murdered 19-year-old Tommie Lindh. At the same time, system media backed by the prosecutor have tried to turn the narrative into a “single tragic event” and not about a Swedish nationalist who was murdered by an African immigrant when he tried to stop a rape.

The murder was brought to the attention of nationalists and immigration critics from the Sweden Democrats and the Nordic Resistance Movement. Grassroots activists on social media started using the phrase “His name is Tommie Lindh” and managed to get it to trend on Twitter.

“The murder of Tommie Lindh and the non-existent reporting is a strong reminder of everything I detest with today’s media. A young man has been put to death after trying to stop a Sudanese from committing a rape. The narrative does not fit and then the silence is total,” wrote Pontus Andersson, chairman of SD Helsingborg, on Twitter on May 18.

Nordfront, the party organ for the Nordic Resistance Movement, got in touch with two of Tommie’s friends who confirmed the story. They confirmed that Tommie was a nationalist, and that he had died a heroic death.