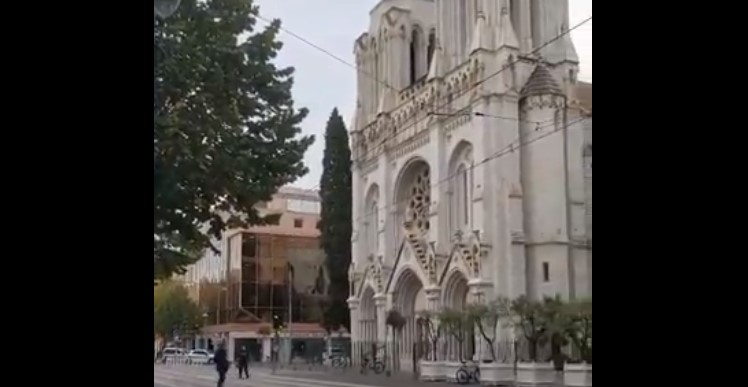 Screenshot from Twitter: Terrorist attack in the Notre-Dame-de-l'Assomption basilica, avenue Jean-Médecin in the north of Nice

An attacker killed three people and injured others in a knife attack in a church in the southern French city of Nice. Two of the victims are said to have been beheaded.

Information about the perpetrator was initially not available. The perpetrator was shot and then arrested by the police and taken to hospital, reported the regional Nice-Matin newspaper, citing security sources. He is in his twenties and claimed to be called Brahim.

The incident is reminiscent of the Islamist attack on the teacher Samuel Paty in Paris on October 16. The educator was killed by an 18-year-old Chechen shouting Allahu Akbar and then beheaded. The teacher had shown Mohammed cartoons in class as an example of freedom of expression and received angry reactions from Muslims.

Four years ago, an Islamist carried out a massive terrorist attack in a truck in Nice. He drove the vehicle across a promenade and killed 86 people. Some 400 others were injured, some seriously. That same year, Islamists killed an 86-year-old priest in a church in Saint-Etienne-du-Rouvray. The perpetrators described themselves as “soldiers of the Islamic State” and seriously injured another person.

The mayor of Nice, Christian Estrosi, wrote on Twitter that everything pointed to a terrorist attack. He called for stricter measures to “destroy Islamofascism”. For security reasons, he asked for all churches in the city to be closed.

The parish priest, Gil Florini, told the broadcaster BFMTV that they had been warned of an attack in advance. “We were warned that attacks could occur. We were warned for two or three days that there could be additional attacks with the coming of All Saints’ Day. We were on our guard, but we didn’t think it would turn out like that.”

According to French radio stations, the arrested perpetrator repeatedly shouted “Allahu Akbar” after his arrest. French President Emmanuel Macron is on the way to the attack site.

Another similar attack reportedly also occurred in Avignon on Thursday morning. There a man is said to have threatened passers-by with a knife while shouting “Allahu Akbar”. The police shot the man. According to the British daily The Mirror, the man had attacked police officers.

According to our information, a third knife attack also took place in front of the French consulate in Jeddah in Saudi Arabia. These barbaric attacks were justified by the former prime minister of Malaysia.