The US Centers for Disease Control (CDC) recommended that "essential workers" be vaccinated before those over 65 years old – the risk group – despite their own modelling showing this will result in more deaths.

The reason is because the CDC claims that it would be “unethical” to prioritize the elderly because they are not racially diverse enough. Their reasoning also took for granted that healthcare workers would be first-in-line. The question was whether the next group should be other essential workers, the over-65s or adults with high-risk conditions.

The authors of the study relied on the modelling of the deaths prevented by prioritizing each of the three groups, for both a “disease-blocking” and an “infection-blocking” vaccine scenario. They have decided on this by rating each group out of three for each of three metrics:

In both scenarios, vaccinating the over-65s is predicted to save the most lives. In the disease-blocking scenario (which appears to be more relevant for the Pfizer vaccine) more than twice as many deaths are prevented by vaccinating the elderly first, compared to essential workers.

Despite this, the authors concluded that the “differences among 3 strategies is minimal”. Each strategy is thus awarded 3 out of 3 marks.

Implementation was considered easier for the elderly than the other two groups, resulting in the high scores given to older people. But the key consideration was that “racial and ethnic minority groups [are] are under-represented among adults>=65”. 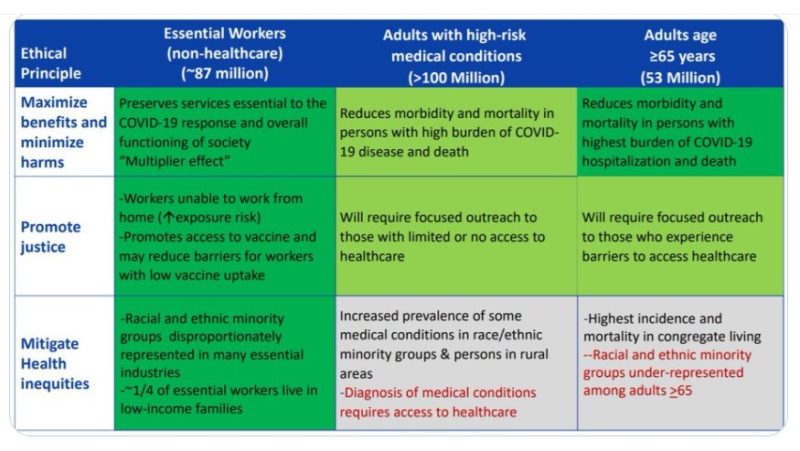 The recommendation was therefore that essential workers would be next in line after healthcare workers to take the vaccine. It was unanimously approved by the 14 voting members of the relevant CDC committee (ACIP).

This report obviously relied on the artificial separation of “Ethics” and “Science” and opaque and questionable modelling based on implied racial categories.