There is an accumulation of cases that worries many citizens and experts alike. In Cologne, at least 1789 people tested positive for Corona - after their vaccination. The head of the city health department is also concerned about this development.

According to the official figures, 394 060 people had received their first vaccination against Corona in Cologne by Wednesday. On May 12, 2611 people tested positive. On Sunday (May 9) there were 3444 people. The explosive factor however is that 1789 of those infected with the Corona virus had previously received a vaccination.

The German tabloid, the Bild Zeitung reported that 1335 people had an infection – as of Sunday – despite a first vaccination and 454 despite a second vaccination. Thus, half of the Corona infections reported in Cologne have been due to people who have already been vaccinated.

He said thus far only a fraction of those fully vaccinated would become infected with the virus. “As long as there are so few, the events can be handled. We are continuing to monitor the situation, but these cases have not yet had any impact on our vaccination plan,” said the head of the health department.

The Robert Koch Institute stated that the vaccines were “very effective” but conceded that an infection could occur despite the vaccination, since the vaccination does not offer 100 percent protection. In addition, the first dose of vaccine only takes effect until ten to 14 days after it was administered and full protection would not exist until around two weeks after the second vaccination.

The currently assumed protective effect of the different Corona vaccines ranges from 95 percent for Biontech/Pfizer, 94 percent for Moderna to 70 to 86 percent for AstraZeneca and 66 to 85 percent for the vaccine from Johnson and Johnson. However, statistical evaluations have already shown that with a high vaccination rate, the Corona cases and the number of deaths also increase.

Yale professor Harvey Risch, a renowned infectologist at the US elite university, has claimed that the majority of the new Corona cases have already received a vaccination.

Risch is considered a prominent and well-informed critic of the official Corona narrative in the US. In this role he has now appeared on the program War Room. While American citizens were won over by the claim that self-protection against infection after a vaccination is between 60 and 90 percent, this may not be the case. It is now apparent that many people still show positive Covid-19 test results despite a vaccination. Risch referred to the fact that doctors in clinics confirmed to him that more than half of all new Corona cases were vaccinated: “They estimate that more than 60 percent of the new patients they treat already have had a vaccination against the Coronavirus.”

Large pharmaceutical companies have not provided any data concerning the only important question of whether the vaccination protects against the spread of the virus.  One therefore has to look empirically at those countries where vaccinations are most widely used: The Seychelles and Israel are two prime examples. 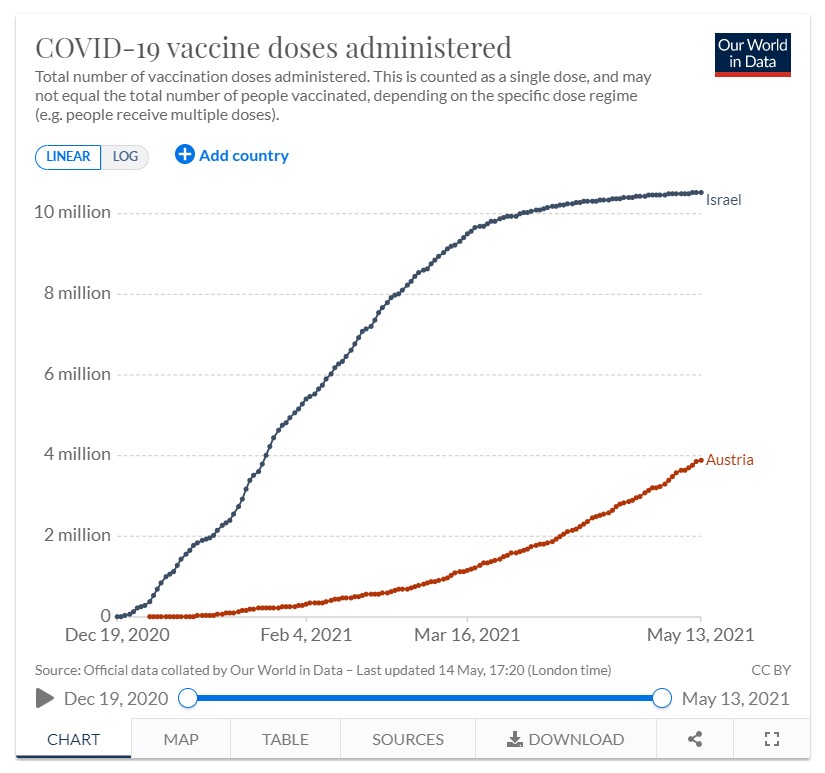 Prime Minister Benjamin Netanyahu announced that Israel would be the first country to exit the Corona crisis. Israel has given at least one dose of the vaccine to more than half its population, boasting the title of most vaccinated country in the world. Despite this, no increased immunity has been noted. On the contrary: since the vaccinations began, the number of Corona infections in Israel seems to have exploded.

Netanyahu even advised the Austrian Ministry of Health in December by order of Chancellor Kurz. Like Austria, Israel has a population of around nine million. In terms of the number of people vaccinated, the Jewish state is far ahead.

While vaccinations have hardly started in Austria, the number of those who have tested positive has been falling steadily since November. In Israel, the numbers rose exponentially with the start of vaccination in mid-December. 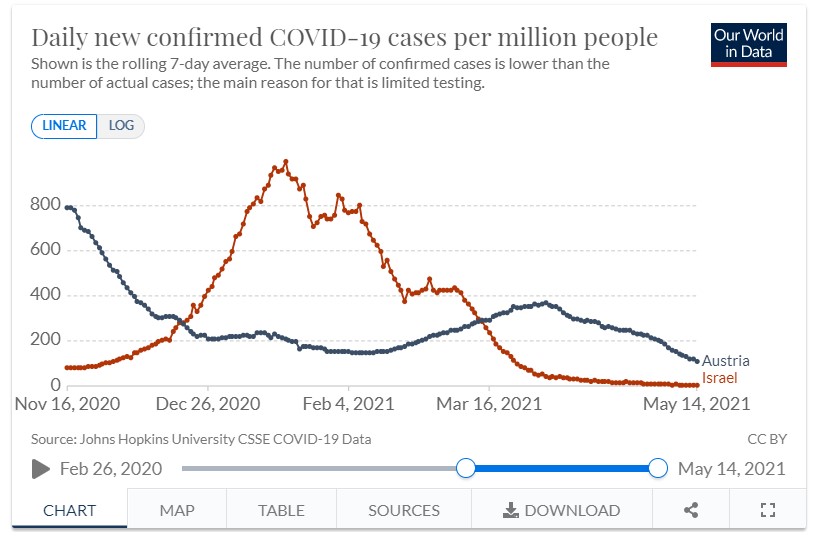 Four people have already died in Israel as a result of being vaccinated with the mRNA vaccine. Hundreds of people also suffered from side effects, some of them severe. If one looks at the development of the Israeli infection numbers, the vaccination does not seem to have any positive influence on the infection process. This raises the question of whether the vaccination makes sense on the one hand and, on the other hand, the question of whether it is ethically justified to expose people to an additional health risk through vaccinations.