Polish border fence with Belarus being constructed to keep flood of illegals out. Screenshot from YouTube
Warsaw

In Poland, a change in the law on asylum has come into force, according to which migrants entering the country illegally can more easily be expelled. The background to this is a sharp increase in the number of illegal entries via Belarus.

According to the change in the law published in the official gazette on Tuesday, the border guard commander can expel the person concerned from the country immediately after logging an unauthorized border crossing. In addition, the commander can prohibit re-entry into Poland and the Schengen area for a period of six months to three years, according to RT.

In future, the Immigration Office may reject any application for international protection if the applicant was caught immediately after crossing the border illegally. The office only has to consider the asylum application of a foreigner in the case that he “came directly from a national territory in which his life or freedom was threatened with persecution” and can credibly present the reasons for his illegal border crossing.

According to EU law, those seeking protection must file their asylum application in the EU country they enter first, but this arrangement, called the Dublin Regulation, is no longer enforced. Most illegals do not stay in Poland, but move on to Germany.

Similarly, migrants who enter or stay in German federal territory illegally and without a valid passport are liable to prosecution in terms of Section 95 of the Residence Act. As a result, a police officer must file a criminal complaint if these provisions are met.

This also applies when illegals ask for asylum. If those migrants are unable to show any valid identity documents or residence permits (which is usually the case), they are initially suspected of violating Section 95 of the Residence Act.

Wasting time while working for the wastepaper basket

This means that if a large number of asylum seekers have been apprehended, a large number of police officers are also necessary to deal with the cases. This involves measures which take up a lot of an officer’s time.

“What bothers me most in this area to this day, is that you knew and know that you are working symbolically ‘for the wastebasket’ even before the red tape exercise has started. Early on during the events in 2015, we were informed by the responsible public prosecutor’s office that the police would not be pursued in connection with the illegal stay of people,” a police officer admitted.

“You can surely imagine how motivated we were when doing the paperwork, if you know that what you have written can only serve as a paperweight, but at the same time it is made clear to you by a senior that failing to prepare a criminal complaint is a criminal offense of obstruction or punishment.” 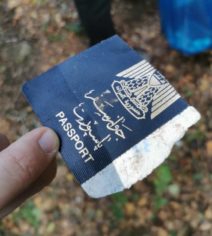 A torn-up passport was possibly never returned because the owner has since changed his name. Image: Facebook

“Finds” in a forest near Görlitz in Germany have shown that everything is supposedly “lost” when crossing the border as an illegal – almost as if the asylum seekers know that they should do whatever they can to complicate the paperwork for German officials.

Apparently, as a person seeking protection, it is not easy to keep three things together. Some things get lost all the time, including passports, plane tickets and identity documents.

In a forest near Görlitz, new finds turn up every day – from a torn passport, a Turkish telephone card, paper money from Turkey and Belarus or torn documents of an airline reservation. According to the finder, the finds were handed over to the police.

The fact that the “refugee” who arrives illegally in Europe always loses his papers while fleeing, but never his iPhone, is probably the best proof that such people are by no means “poor persecuted refugees”.

These refugee fraudsters even have credit cards, which proves that poverty is not the reason for people to flee and needs to be eradicated, as the mainstream media tell us. The opposite is the case – those who are genuinely needy cannot afford this journey to “seek protection”.