For weeks now, the newly discovered Corona variant Omicron has been misused by politics and the mainstream media to spread even more fear and panic. The doctor who discovered this variant does not understand the overreaction in Europe and warned that this could lead to a missed opportunity.

The disease is mild and the spread of Omicron could lead to natural immunity in the population. That would be an advantage if new variants emerge again. Lockdowns would, however, prevent this positive development. 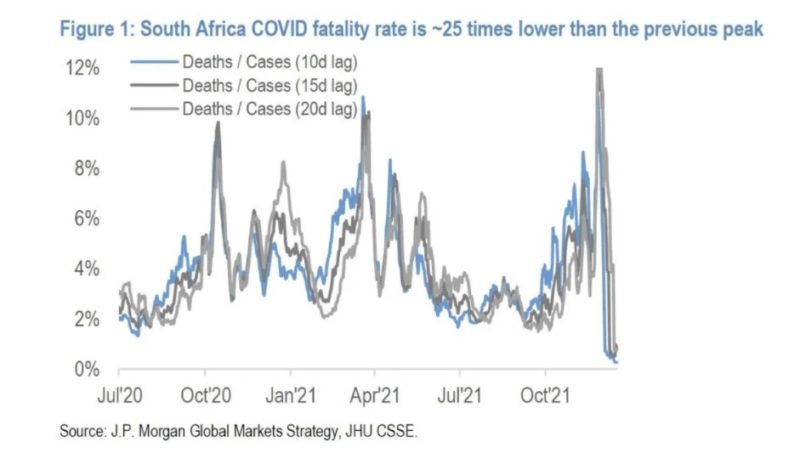 This graph highlights the peculiar response to a mild course of Omicron. Photo supplied

The South African doctor Dr. Angelique Coetzee reported the first Omicron case and treated it. In an article in the British newspaper Daily Mail the doctor was surprised at the exaggerated reaction to the variant in Europe. “Let me be clear: nothing I’ve seen in this new variant justifies the extreme measures the British government has taken in response,” said Coetzee, shocked after UK Prime Minister Boris Johnson urged people to “think carefully” before attending Christmas parties and social events.

“I was stunned by the response,” she said. “Nobody here in South Africa has been hospitalized with the Omicron variant, and it is also assumed that nobody here is seriously ill with it,” added Coetzee.

“My first Omicron case, a young man who came to my practice who initially believed he had been in the sun too long after working outdoors. Patients typically come with aches and pains in their muscles and limbs, headaches, and some tiredness. And their symptoms don’t seem to be getting worse. They subside after about five days, and that’s it,” she explained, describing the mild course of the disease.

Patients are treated at home with anti-inflammatory drugs such as ibuprofen and low doses of cortisone. Contrary to the alarmism in Europe, there are no considerations in South Africa to impose new restrictions or lockdowns. The doctor explained that one has got used to new variants. “When our scientists confirmed the discovery of another one, no one made anything big of it. Lots of people didn’t even notice.”

She also pointed out that relatively few people in South Africa have had the experimental preparations. So far, just over 31 percent have had an injection, and around 26 percent have been jabbed stung. “Even unprotected bodies repel this variant much more easily than Delta.”

South African data analyst Pieter Streicher agreed with Coetzee’s take on the Omicron variant, saying it could in fact end the pandemic.