Mario Poggia has not been vaccinated himself, according to a whistleblower. Facebook
Bern

The Swiss State Council for Health persecutes opponents of Covid passports and vaccinations, but are the members themselves vaccinated?

In a recently published statement, Mauro Poggia, the State Councilor responsible for the health sector in Switzerland, denounced facilities that do not require proof of a Covid injection. “Those who take the trouble to acquire the health passport must themselves become an instrument of public control”. This was “a civic duty,” he added.

It is not the first time Poggia has tried to enforce a policy of active discrimination. Previously he had made a proposal to deny unvaccinated people health insurance coverage if they are hospitalized for Covid-19.

In August, he also called for punishing unvaccinated nurses who refused to submit to the obligation to be tested for work.

In view of these new threats to the privacy of Swiss citizens and the imposition of a Covid certificate, which a majority of the population accepted in the referendum on November 28, anonymous “whistleblowers” ​​in a Geneva hospital have revealed some interesting facts. 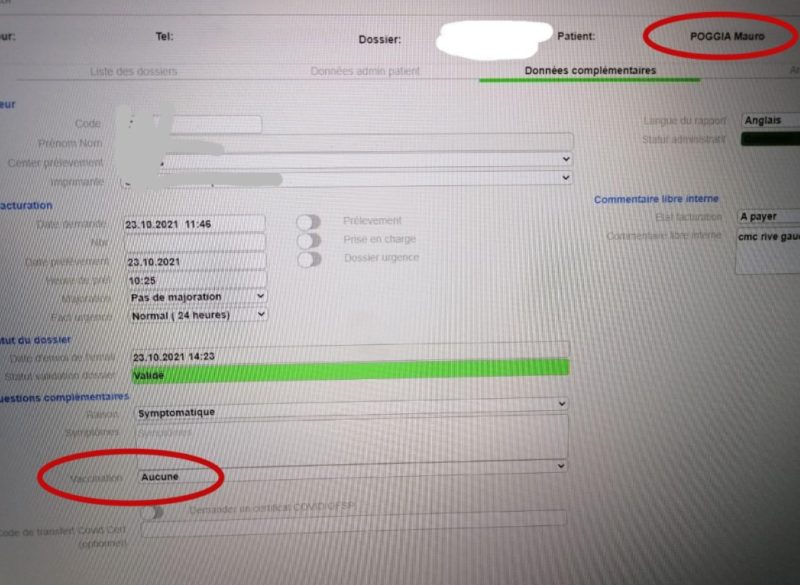 In the bottom left corner of the screen, it shows that Mauro Poggia has had no jabs. Twitter

Without being able to guarantee the absolute authenticity of the information that Poggia has not yet been vaccinated, the spread of this image is indicative of the growing anger and distrust that his extreme statements have aroused. For many, the question now arises whether the utterances of this omnipotent man are also reflected in his actions.

Those who pretend to be inquisitors and want to turn private health data into an instrument of public control should themselves be the first to be questioned and judged by the subjects they aim to subjugate.

For them to hide behind the “right to medical confidentiality” would be tantamount to treason. And arguing that an error in the registers had occurred, would also be inconclusive in this case.

If it turns out that Poggia had not received two or three doses, there would be serious cause for concern since he himself may not trust the so-called Covid vaccines.

California’s governor has not had his children jabbed

The other unfortunate similar example is California’s Governor Newsom, who, after insisting on forcing children to be vaccinated in his state, refused to have his own children jabbed.

At the beginning of October, Governor Newsom made history as the first US governor to mandate vaccines for children. “Public or private [school], they have to be vaccinated,” Newsom said in a press briefing on October 1.

But since his lofty announcement, ABC10 received a response from Erin Mellon, a spokesperson for the Governor’s office on the matter. “At this time, Gov. Newsom’s oldest 12-year-old daughter named Montana has not been vaccinated.” No appointments have been made for his daughter to get the jab either.

This may be because the governor himself had suffered serious side-effects from his booster shot.

Swiss voters meanwhile voted in favor of a Covid pass in a referendum, the Guardian reported. Results from 16 of Switzerland’s 26 cantons showed some 60 percent had voted in favour of the law, on a very low 64 percent turnout. The law provides the legal basis for the Covid certificate indicating that a person has been vaccinated or has recovered from the disease.

The referendum outcome was no doubt influenced by media hype concerning new Covid-19 variant Omicron from South Africa. No one in the epicentre of the outbreak in Pretoria has however even been hospitalized with it. And strikingly, the vaccination rate in South Africa happens to be very low.

Yesterday, after Omicron had been supposedly spreading like wildfire for a weeks, South Africa averaged 30 deaths per day, down 93 percent….. pic.twitter.com/uFGnMpcUC6

In Switzerland, where more than two-thirds have been fully vaccinated, the numbers of new Covid cases are now more than seven times higher than in mid-October, despite having not one Omicron case.

There was however no vote on a yes or no to mandatory vaccination. In view of this discussion in Germany and Austria, that is important to underscore.

Insofar as repressive measures that intervene massively in the everyday reality of citizens are concerned, these can only be politically enacted and justified if there is evidence of actual fatal danger to life and limb. It does not make sense to initiate referendums on this subject, the currently foreseeable results of which can also be used to give legitimacy to political repression by mendacious and dubious officials.

The high number of dissenting votes (more than a third) in the Swiss referendum at least has the critical mass to slow down the globalists.

🇨🇭 John Bosnić, explains in a private video how a low metal barricade on a street in Switzerland protects the jabbed from the unjabbed.