Germany is being ruled by idiots: Karl-Josef Laumann tries to scare people by telling them that a virus can be transmitted like measles. Wikipedia

Some 1152 "walks" against the government's controversial Corona policy will be taking place in 16 federal states in Germany today. This number is likely to be far too low, because these were only the events announced on social media.

Such demonstrations and protests disguised as “strolling in the street in large groups” are particularly popular in eastern Germany. The epicenter nationwide has been Rostock with 17 000 participants. In Schwerin the demonstration counted around 4000 walkers, and in Magdeburg more than 12 000 people took to the streets.

In Saxony, tens of thousands of people expressed their displeasure with the leftist government and its Corona policy. The protests were peaceful almost everywhere. In Bautzen however, the situation escalated when the walk was suddenly stopped by the police with pepper spray.

In Thuringia, more than 10 000 people walked against the Corona measures, as the MDR reported. It is quite possible that this estimate was overly conservative, as there were 4 000 people on the streets in Gera alone. Wittenberg (4000), Cottbus (3000) Nuremberg (according to police 4700), Braunschweig (3000), Bruchsal (3000), Göppingen (1800) and Heidenheim an der Brenz with 1500 participants were very well attended.

Strolling despite the police ban

In relation to the number of inhabitants, the Stuttgart area was particularly active. The growth in Vaihingen an der Enz was almost exponential. In the district town with around 29 000 inhabitants, almost 700 people moved through the streets and alleys. Three weeks ago there were hardly even 200 participants. The proportion of strollers in the town of Brackenheim with 17 000 inhabitants, which was able to mobilize a proud 1500 people, was even greater.

Between 1500 people (according to the police) and 3500 (according to information from participants) came to Pforzheim to state their displeasure with Corona measures. During the entire duration of the event, the event was peaceful and no counter-demonstrators could be seen.

According to the Interior Ministry, there were 76 demonstrations in Rhineland-Palatinate on Monday, some of which had been banned by the responsible districts and cities. In the southern Palatinate, for example, the cities of Landau, Speyer, Neustadt and Frankenthal as well as the districts of Germersheim, Südliche Weinstrasse and Bad Dürkheim had extended the general decree on the ban on “Corona walks” on Monday afternoon.

In Kaiserslautern alone, according to the police, a total of around 1500 people gathered in the city center, although such an event was prohibited. However, the officials did not intervene, instead using loudspeaker announcements to draw attention to the fact that the event was not allowed.

Munich threatens fines of up to 3000 euros

Against the background of the massive protests and the lower number of infections, the police union (GdP) in Saxony suggested lifting restrictions on the right of assembly.

In view of the weekly recurring meetings and the resulting necessary police operations, police officers feel “that the police are being abused as a substitute for the political dispute,” said GdP country chief Hagen Husgen on Tuesday. “However, social problems cannot fundamentally be solved by police means.”

Munich seemed unimpressed and banned the planned Corona demonstration on December 29. In the general decree issued on Tuesday it said specifically: “All stationary or moving demos in connection with so-called Corona walks are prohibited” in the entire city area, according to tabloid Bild.

“Participation in demos against the fight against pandemics that are not registered in advance and comply with the requirements is an administrative offense and will be prosecuted by the police. A fine of up to 3000 euros can be imposed on each individual participant.”

The city twisted the facts to make law enforcement appear to be victims of “violent marches”. Peaceful participants had however been attacked by police officers: “With this, the city wants to prevent violent marches like the last one on December 22, when there was violence, insults and threats from those who opposed the vaccination. The police had to use batons and pepper spray.”

Fools and shills are in charge

Because of the Omikron variant, stricter Corona regulations came into force in several federal states in Germany at the beginning of the week. But the sheer stupidity of some pro-vaccine officials lightened the mood somewhat on Twitter on Monday.

The North Rhine-Westphalian Health Minister Karl-Josef Laumann (CDU) tried to alarm viewers in an interview on WDR television, as the RedaktionsNetzwerk Deutschland reported on Tuesday with “new facts” from “experts” about Omicron: “Today I received an expert report from the Cologne Health Department that still clearly states: The new thing about this Omikron variant is that it is not only transmitted via droplets, but that it is also transmitted through the air, similar to measles.” 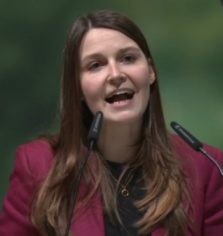 Before Christmas, Saskia Weishaupt, a member in Bavaria for the Green Party, had asked the police to use violence against anti-jab participants. “It is the tactic of the ultra right wing fanatics to claim the streets bit by bit. The police must act and, if in doubt, use pepper spray and batons. We can’t leave a millimeter to them!” she screamed on Twitter. She urged the police to “fight their way down the street”. The pharmaceutical company Pfizer follows Weishaupt on Twitter.

Previously the same Weishaupt had denounced President Lukashenko’s violent crack-downs on demos in Belarus. Her latest message was incidentally riddled with grammatical errors.

For many educated Germans, her entry into the Bundestag with only a rudimentary understanding of spelling and grammar in the German language has been a mystery.

Being faced with repressive state power, citizens first recoil and then react

The power cartel is worried because evidence of vaccine failure and injuries can no longer be suppressed, even with fables about the “dangerous” Omicron variant.

The first encounter with repressive state power, which for many may come as a shock, nevertheless leads to a politicization and radicalization of citizens. In the long term it will endanger the elite, especially because it is being expressed in peaceful walks with no violence.

There may soon be walks not only against the arbitrary Corona measures, but also against the social consequences of inflation and rapidly rising energy costs, as well as against NATO’s course in the Ukraine conflict, while rallies in support of the ECB’s inflationary policy, in support of high energy and food prices, and the encirclement of Russia are highly unlikely to occur.