A battle of images? German tabloid Bild – which ironically means "image" in English – has lost its way in the fog of war.

In at least three instances, the news outlet has used fake images in reports from the “war front in Ukraine”. Bild presented images of a burning building allegedly in Kiev which were actually from an explosion in the city of Tianjin, China. The video had “captured the fear of eyewitnesses,” according to the source, BBC News.

Fake news: The “intrepid” German reporter from Bild “in Kiev”. Screenshot from the Bild report

Footage of two massive explosions in the Chinese city of Tianjin, was taken by a stunned eyewitness, and captured the fear and terror of those who saw what happened. Dozens of people died and hundreds were injured when a warehouse owned by a company specialising in handling hazardous goods caught fire and exploded. City officials say they still did not know what materials were at the warehouse at the time of the fire, or what caused the blasts. Eyewitness Dan van Duren filmed the moment of the explosions, before he and others fled to avoid the danger in April, 2015.

Not quite the Ukraine today…

Then the tabloid proceeded to present another fiction as “hard news” about a woman “getting shot by Russians”, alleging that Moscow has been targeting housing complexes and killing civilians. The Ukrainian State Emergency Service had posted news on its Facebook account that at 8:23 on Thursday about a fire in building 157 in the neighbourhood of Chuguyev, the same location that the notorious “Bellingcat” had geolocated. According to the Ukrainian institution, the fire “was caused by enemy fire”.

But from a report by Turkey’s Anadolu Agency, it is not at all clear if the building had been damaged in this way. Instead, it may have been damaged by Ukrainian shelling. Bild editor Ralph Schuler only tweeted that “the photo was correct” when challenged, without giving any further detail.

At least five Russian aircraft and one helicopter were shot down, Ukraine’s Command of Joint Forces announced https://t.co/8z50AtU2dT pic.twitter.com/lbPBOJjPdx 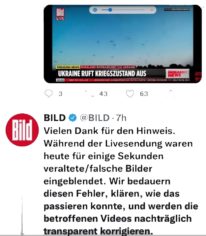 Fake news: These images were not from Ukraine. Screenshot from Bild apology after they were caught lying.

Then Bild continued to lie about the “danger of masses of troops landing with parachutes in Ukraine this week”, except that the footage was from a Russian military exercise in 2014, when around 2000 parachutists had landed simultaneously in the Rostov-on-Don region. Fortunately, a observant reader noticed the fakery and called out the tabloid. They meekly apologised, but sadly not for their previous fake reports.

Hollywood to the rescue!

Ukraine has also been fighting a fact-free war of perception: The Office of the President of Ukraine Vladimir Zelensky itself announced the arrival of a Hollywood actor and director to report on the “Russian invasion”.

The Ukrainian government thanked the “brave” Penn in a statement: “The director came to Kiev specifically to document current events in Ukraine and tell the world the truth about the Russian invasion of our country. Sean Penn is among those who are supporting Ukraine on the ground today.”

Penn had already visited Ukraine in November 2021 to film the Donbass and “Russian aggression”. At the time, he was visiting the eastern regions of the country and speaking to military personnel. Photos from Penn’s trip were released by the Ukrainian Armed Forces Press Service at the time, showing him in riot gear and trying to look the part of a “tough guy”.